Well Chris from Sippin on Paint Water, is hosting a Easter Egg Contest, and i want multiple chances to win so im posting this on here!

Things i forgot about the ZS 40k rules, are

Marines not in combat may fire into an assault at zombies that ARE NOT within base to base of other marines in the combat.   This is resolved as normal shooting.


Not wanting to leave you without visual stimulation, here is a thing i made in gimp and part of a "company profile" i made for my Conclave troops. 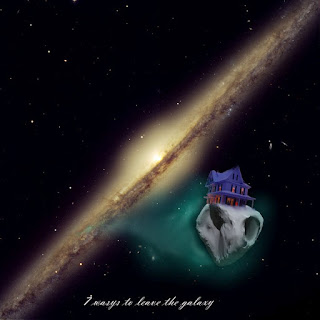 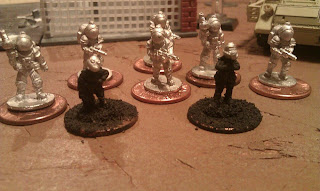 Posted by Impcommander at 3:37 PM No comments:

Hey guys/gals,  last week i was able to get a break from the large amount of stuff i was painting for others and got to paint something of my own !   In this case i went for the seemingly insane task of 130 Night Goblins for my O&G force, this is approximately half of the Gobbo's in my tribe, and likely to be the only painted ones as i don't see a legendary battles game happening in the near future (but wouldn't it be cool if there was one !)

Anyway being a sap for Regimental Colors and History in real life i just had to incorporate 2 different schemes. The two red colored units are actually Regiments Renown, being the Forces under Skarsnik of the Eight Peaks, (who i have but is not pictured)  and the black colored unit is a tribe that lives in the ash choked proximity of a rather large volcano and being the sneaky gits that they are have covered their robes in soot. 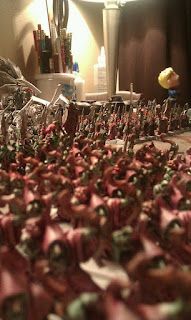 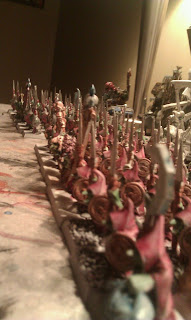 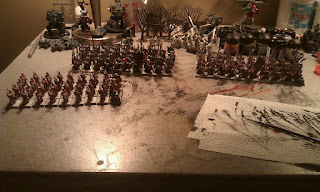 That was last week. Onto the weekend !

Went to hobbytown on Saturday and got to meet with Chris & Chris (chip) from Sippin' on Paint Water and    Fabricators Workbench, which resulted in me getting for an indeterminate amount of time a plethora of undead, which i still am waiting on a price for, but you will see many pics of the army as i paint/model it in the future!

On to the games, which i had several of. But most interestingly was toward the end of the day when Joe and Myself decided that the best use of Fantasy Zombies, Spare Terrain and Chaos Marines was to make up rules for Zombie Survival 40k.

Pics and a summary of what rules we came up with are as follows. 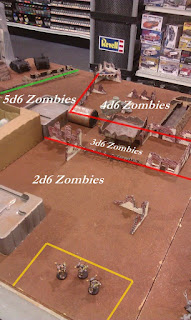 basically you set up your path from the "start" in yellow, through several barricaded sections and doorways in red, to the end point in green.

They can operate out of the normal Squad coherency rules. And are allowed to pick the target of each of their shots, as long as the target does not exceed the troopers frontal arc of vision.   See below for an example. 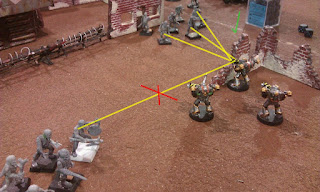 As the marines progress they can acquire a number of upgraded weapons. Such as the Melta Gun, which uses its current strength and Ap, but fires a beam of 5'' that can go through multiple units and cover. 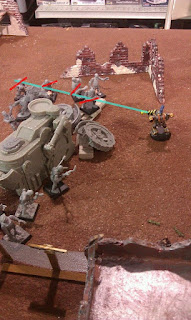 
onto the Zombies, which yours truly controlled.

The rules were that at the start of each turn i would roll the amount of dice for whatever zone the farthest marine was in. So if a marine was in 4D6 and 2 were still in 2d6, i would roll 4 dice, and place that many zombies.  The rules for placement were, they had to be mostly out of sight and out of immediate assault range.

Normal Zombies follow the stats for imperial guardsmen, but with no guns and with the "mindless" special rule. Which is, roll a dice on a 4+ the unit move a D6 in a random direction.  Assuming they pass they act as regular infantry.

We did add 1 special zombie, being the giant wolf,  which had the basic profile of a marine (without our wound additions and guns of course). These would spawn if i was ever to roll doubles and are not subject to the "mindless" special rule.

In the event that a Marine is not completely surrounded by Zombies, he may roll an init. test as if rolling to escape when fleeing a normal assault. if successful, he may run D6 more inches and fire a single weapon of his choice.

And that's all for now folks. I'll send you off with a few thematic Zombie pics !  (none of which were staged, all are from our playing the actual game) 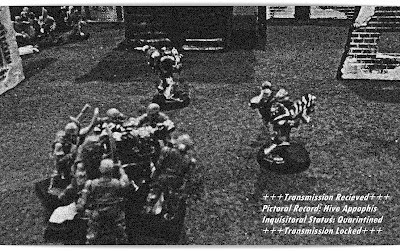 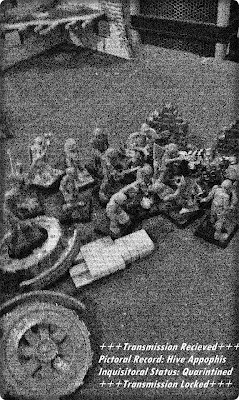 Posted by Impcommander at 2:46 PM 4 comments:

Some Saturday Games and Where my Stuff Came From

Hello everyone. Its been a long while since I've posted, so I'm very sorry in that regard.

First up is some pics of a few games I have played these past two Saturdays.


This first match, was 2v2, with a shared 2k points limit.  I was with Soloman's Traitor IG and had brought my own. We were fighting against two tourney marine players from Raleigh that stop by from time to time. They were playing Wolves, and the GK's.

Some memorable moments were, the 40 man squad ripping apart a Dreadknight in CC, having a freshly recycled squad of conscripts mow down 5 paladins, by scoring 18 wounds! (PEW PEW PEW). And, all of us agreed that the truly titanic clash mid field between the wolf tactical squads and the traitor armored platoon (pic below) was codex worthy.
The game ends in a draw with six kill points per side. 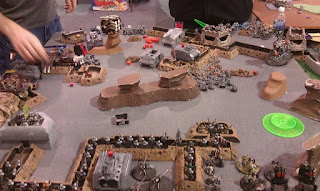 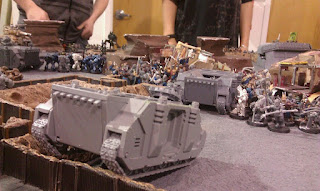 that was 2 Saturdays ago. Oh and my Orcs also scored a Massacre against a Dwarf army. no pics though :(

On to this weekend!

As you will find out the Executioners have grown in size exponentially. Sporting 7 Drop Pods, and 20 Assault Marines, in addition to the half company I have already gotten for painting peoples things.

I decided to play a test game against Landon's Necrons, (the very army i painted for all my marine infantry, pods are from Chris. THANKS CHRIS !)

Game was 1250, Capture and Control, Spearhead,

What i found was that the list has a difficult time dealing with armor. Which i have since remedied.

the most memorable moment, for me at least was my Gabriel Seth/Honor Guard/Chaplain unit charging an 18 man warrior squad with a lord, and completely massacring the whole unit.
Sadly it just wasn't enough and the scarabs and Tesla took a heavy toll on my infantry who were unable to get a single melta hit. Proving yet again that it is the single most inaccurate weapon in the Imperium. 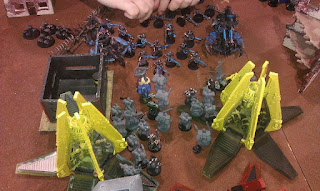 Lastly, I played a 1500 point Fantasy game against Empire. Fantasy appears to have finally taken off around here, which i am very happy about.  My O&G did not fare nearly as well as their last game, and suffered a lot of casualties and failed animosity rolls.  For the most part i lost this game b/c of my unfamiliarity with the army. The goblin hordes (2 of them) will certainly be within 1 foot of both the general and the BSB from now on. The question was posed this Saturday about how a high school student can have all these armies and mini's. Which set me about to thinking about the origins of all my current armies and units.

The Pilgrims of Rust- The result of 7 years of hobby collecting. around 100 infantry were acquired for less than 60 dollars, plus the old 20 man cadian boxes.

The Knights of Decay-  The majority are from Chris actually, in a long ago trade of IG, Orks, and the 5th Ed starter, that resulted in my getting 1500 points of CSM randomly. but i was very pleased with it.

Burnagob's Infernoz Tribe (O&G) -  You would be suprised the number of people who don't want the Battle for Skull Pass goblins.... 30 dollars for the 3rd ed Orc units, and 60 something for the giant, and a sizeable number of other things.

Craftworld Vol-Yor:  You saw that project. It was from Christmas money.

Eisenhorn Conclave-  15mm is much cheaper than 28mm, possibly around 45 $ spent for all infantry, tanks gained from 2 free FoW sets and Mechwarrior leftovers from DJ Cards and Stuff.

What about you guys?  where is your stuff from?