Why they called this hell-hole Angelshearth was beyond him. It may have been known for its hospitality and its cuisine before the Rim Wars; But that was almost a century ago, and all that went away after those commie Volochek's took charge.

More of a Grave than a hearth now... he thought   A place where all the goodness, and hope of a vibrant colonial age is lost.

The Angels of this place are dead.
We Killed them.

The Game Group has returned to 15mm Sci-fi with a furious vengeance.  This time the conflict flashpoint, is a world called "Angelshearth"  the sight of multiple wars between myself (The Eisenhorn Conclave) and the Volochek Respublik ( Chris McCollumn, from Fabricators Workbench) over its pivotal location in the shipping lanes, mineral assets and to prove our upstart border empire is better than the others. 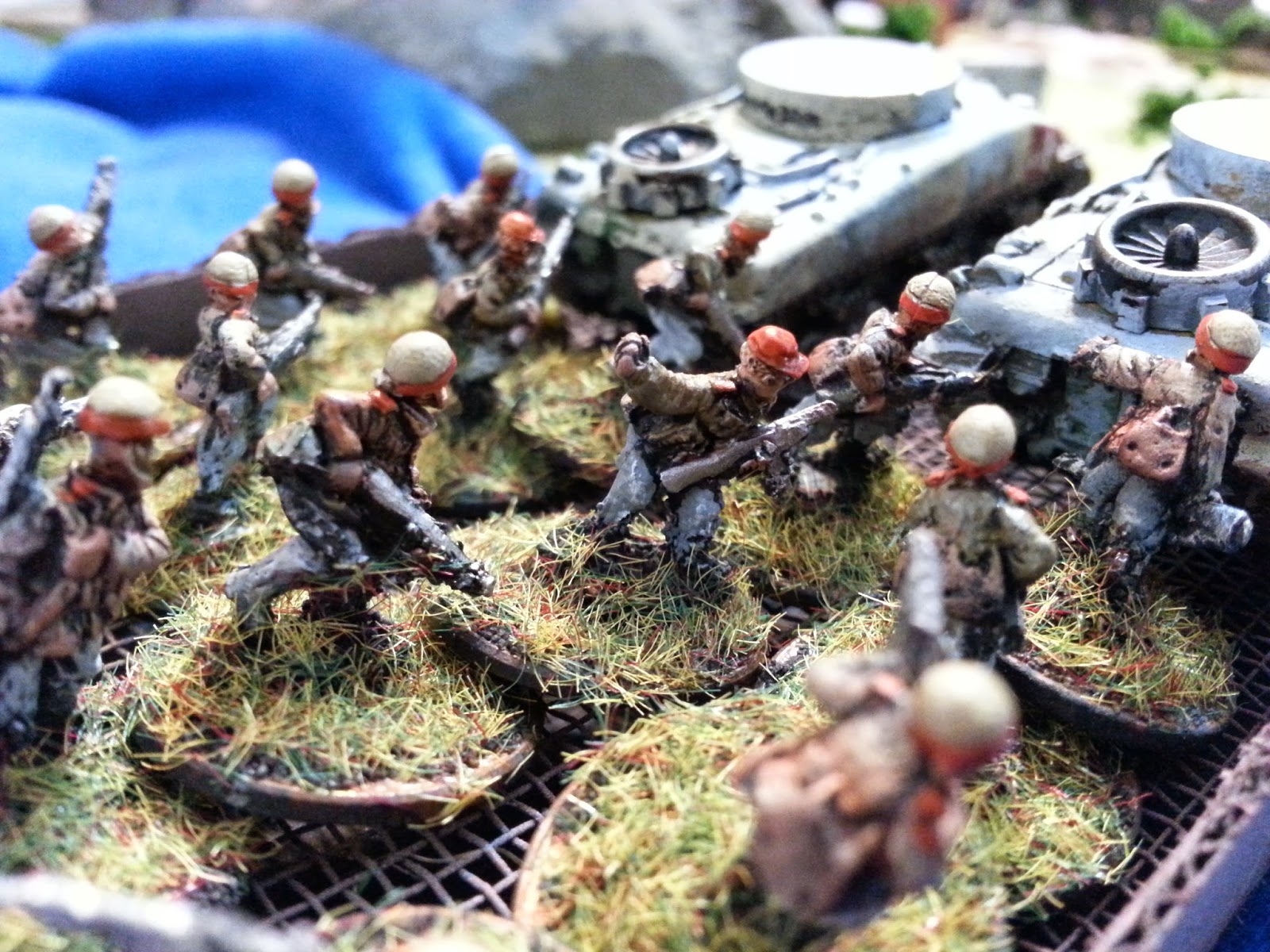 Its marshy, and the sporadic mobile warfare necessitates the use of barges and naval craft by the Conclave, in order to move bodies of troops through the difficult, often waterlogged terrain, to various slum villages and cities. 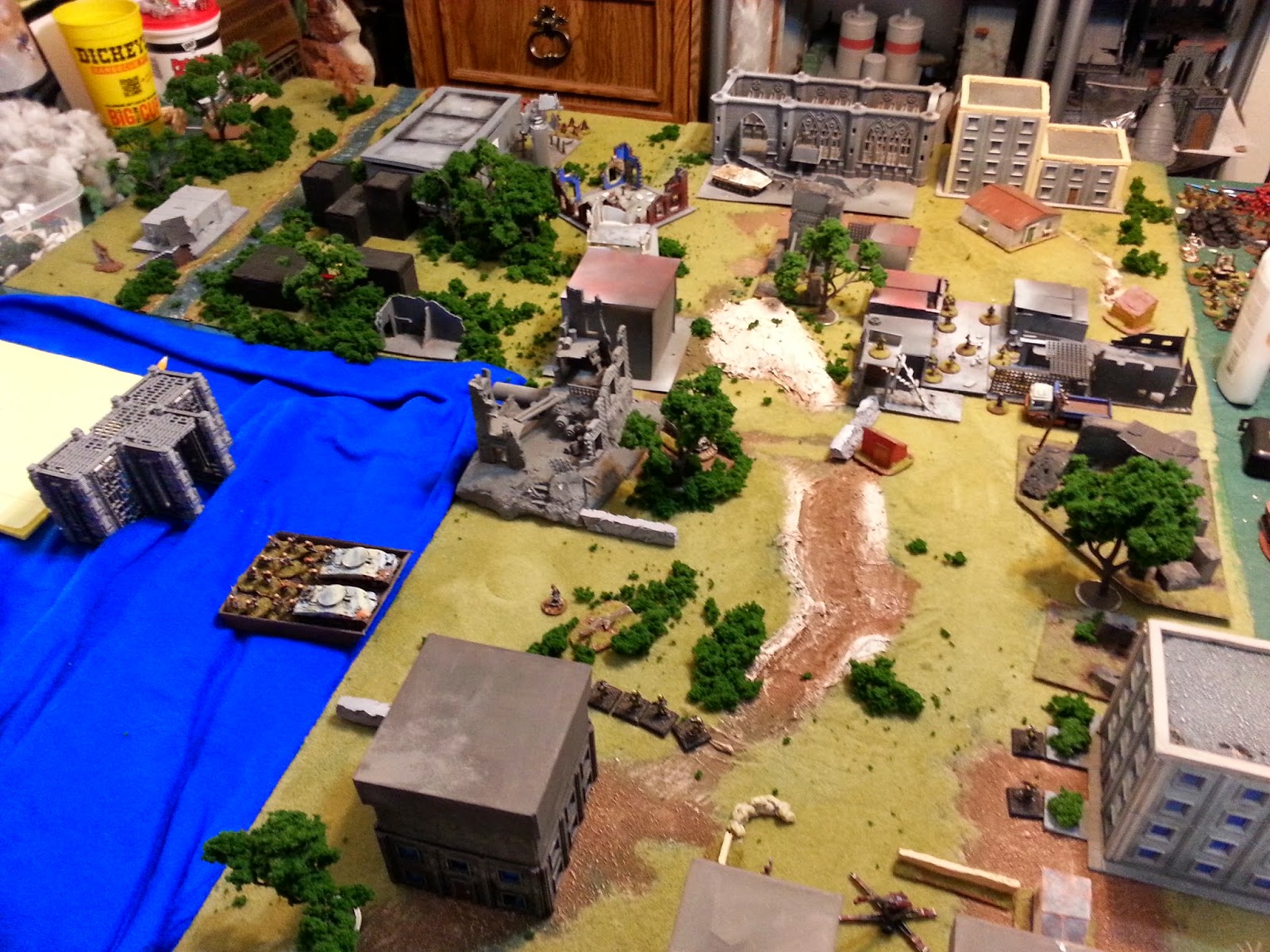 Once festive and well maintained corporate holdings, have decayed and turned into slum cities. 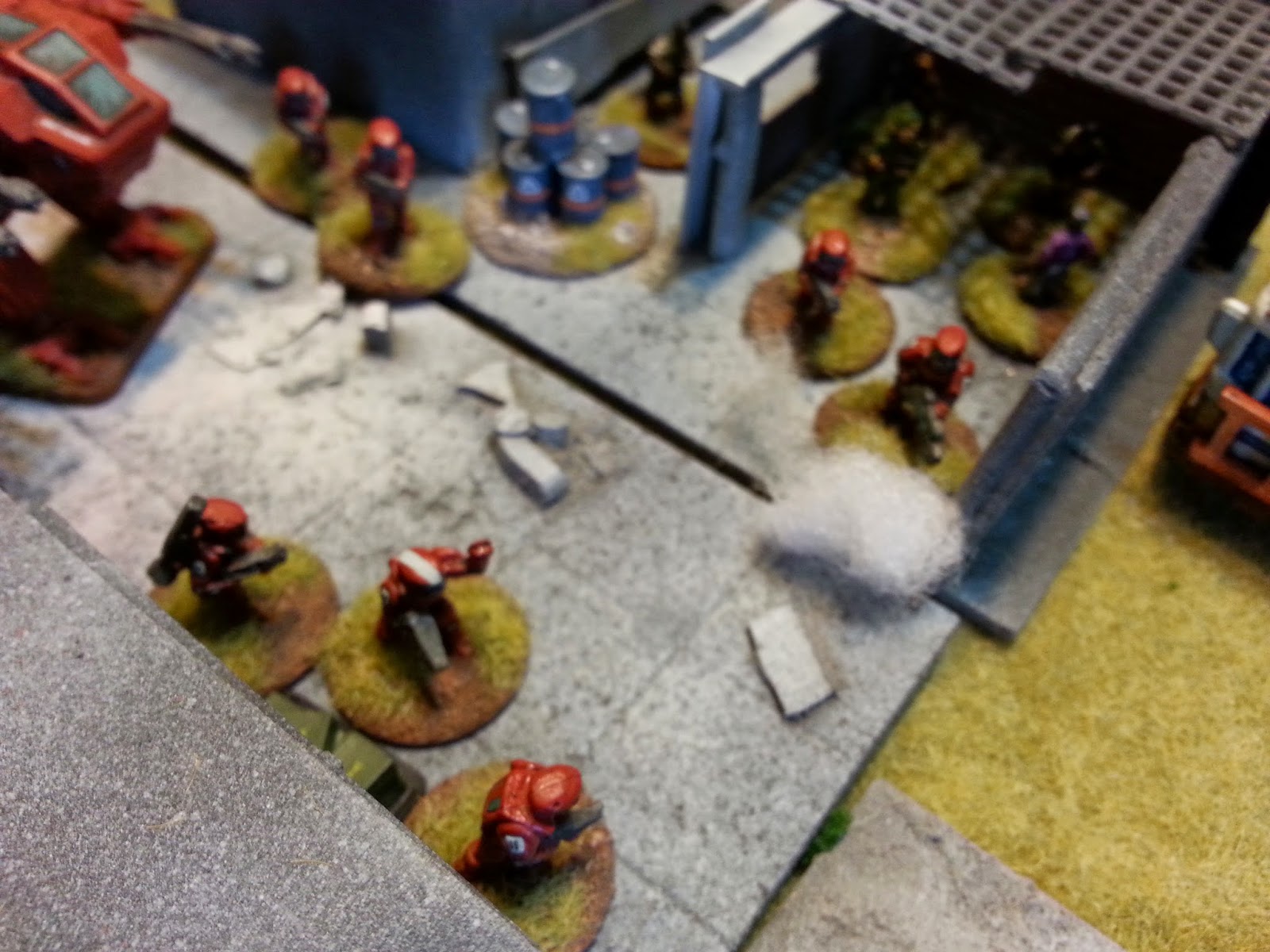 Under the cover of the Volo-Conclave Wars for the planet other forces, have descended to Angelshearth. The Trans-Humanist commune, (played by Chris from Sippin' on Paint Water) utilizing their advanced technology and tactics, have infiltrated the worlds underbelly. Eager to deliver their message of a universal collective. 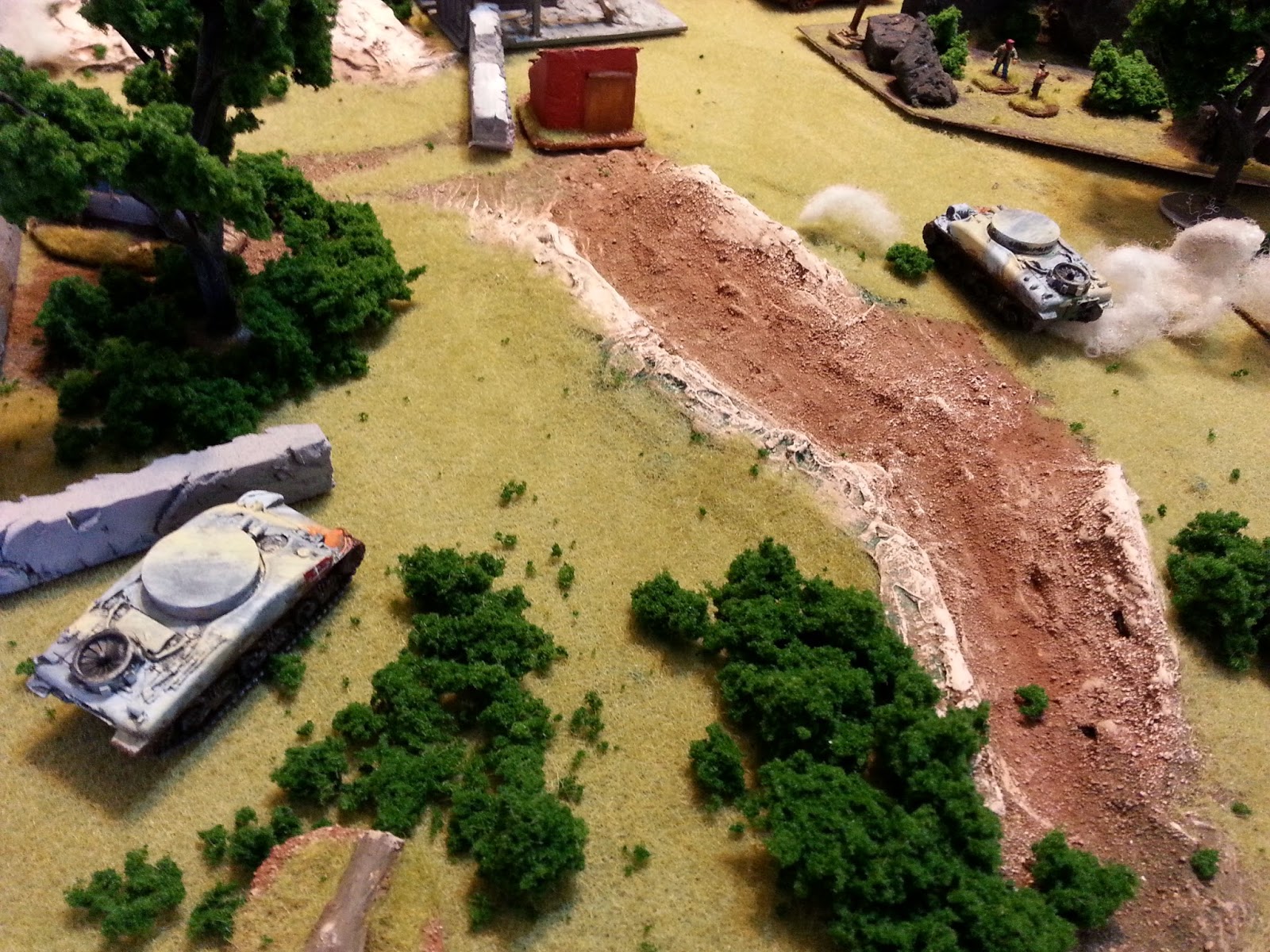 We've tried PMC 2640, and are planning on trying Tomorrows War soon.  Other GGoP members are tooling up armies to play in the setting as well,  We have already played a few games on Angelshearth, and its been engaging as most have sizable painted and converted forces, that we have yet to see hit the tabletop more than a few times.  We have a wealth of background material and army fluff for everything, it pains me not to share it all here. but it might be unmanageable.

Regardless, i will posting the engagements im able to record, and tell you as many stories as i possibly can!

Hey all, the Orion Heavy Infantry from Blue Moon arrived the other week, along with some necessary Westarc minis.   I've tried my hardest to replicate a space marine in this scale, let me know your thoughts,  i plan on bulking up his legs.  I also have a platoon of British FV432's that will serve as Razorbacks.

yesterday, i had a whole gang of guys over for a minis' day.  Owen, JD, and newcomer Kaleb,   we worked on 15mm Sci-fi,  played a small skirmish with those,  myself and JD played a 1500 point Orc v WoC battle in WFB,  and there was a lot of talking about possible manufacturers for Orks, Dark Eldar, and Tau for 15mm 40k.  Hopefully we may soon see several Ork Units WAAAAGHING across the games table. 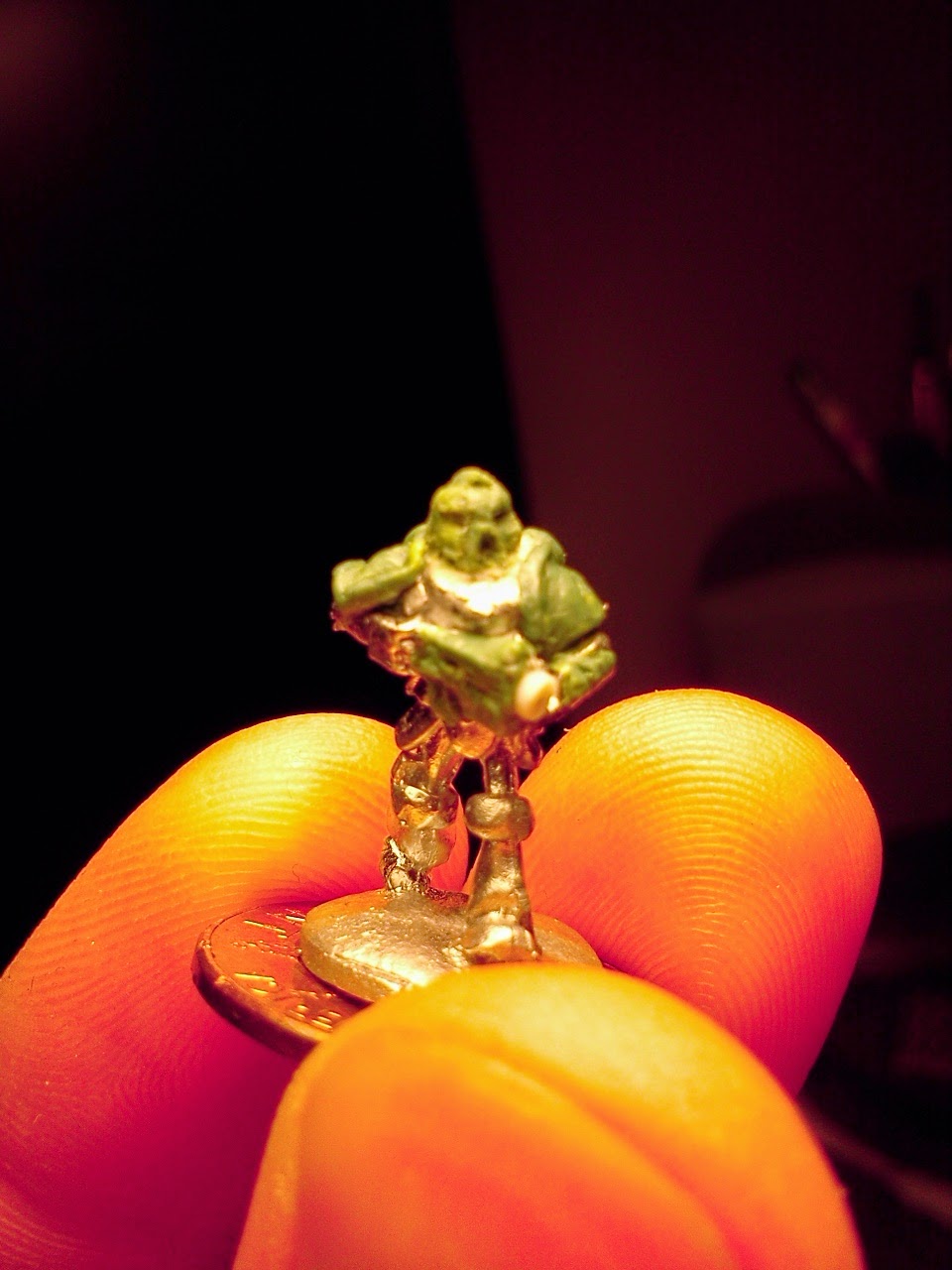 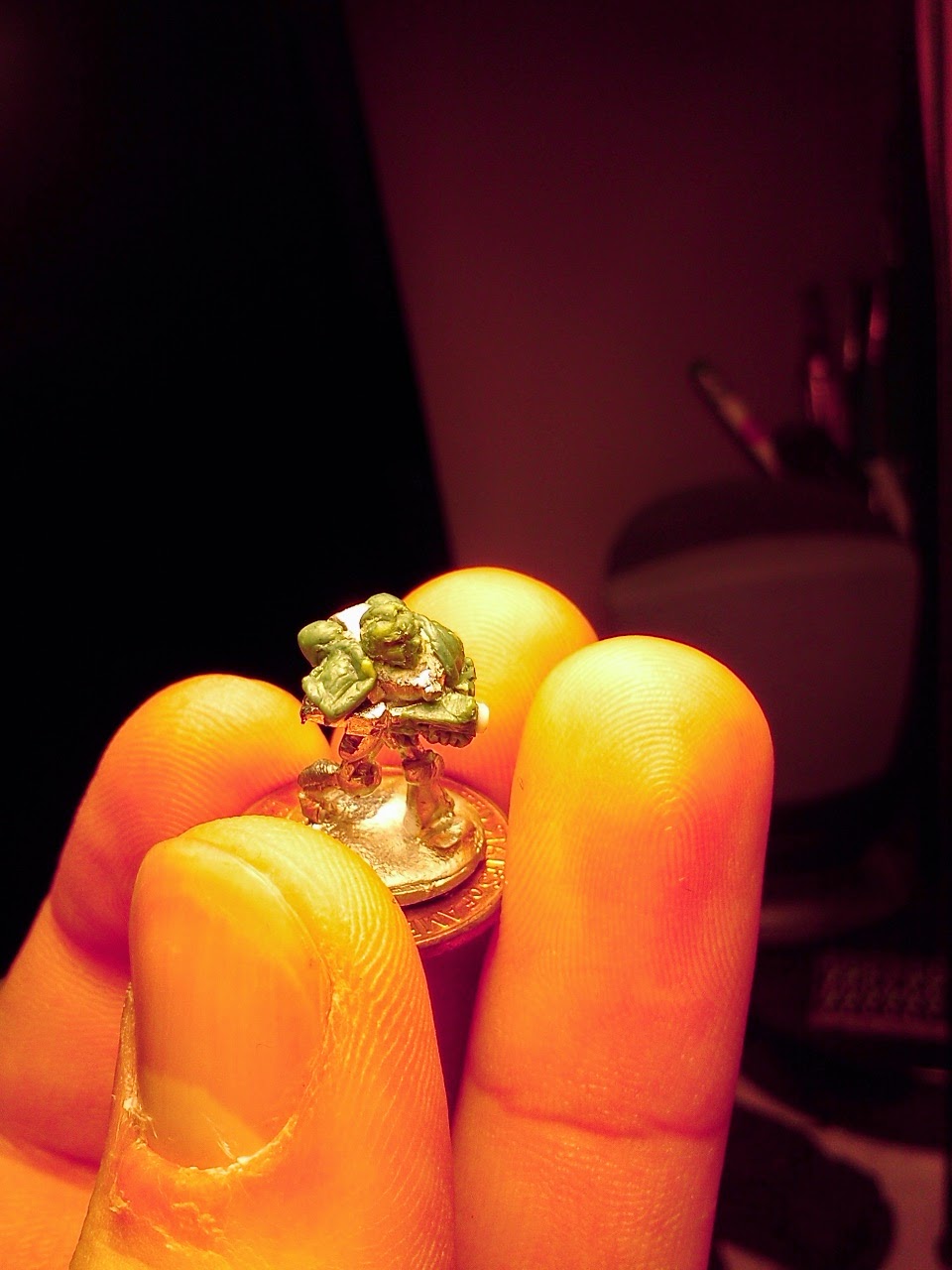 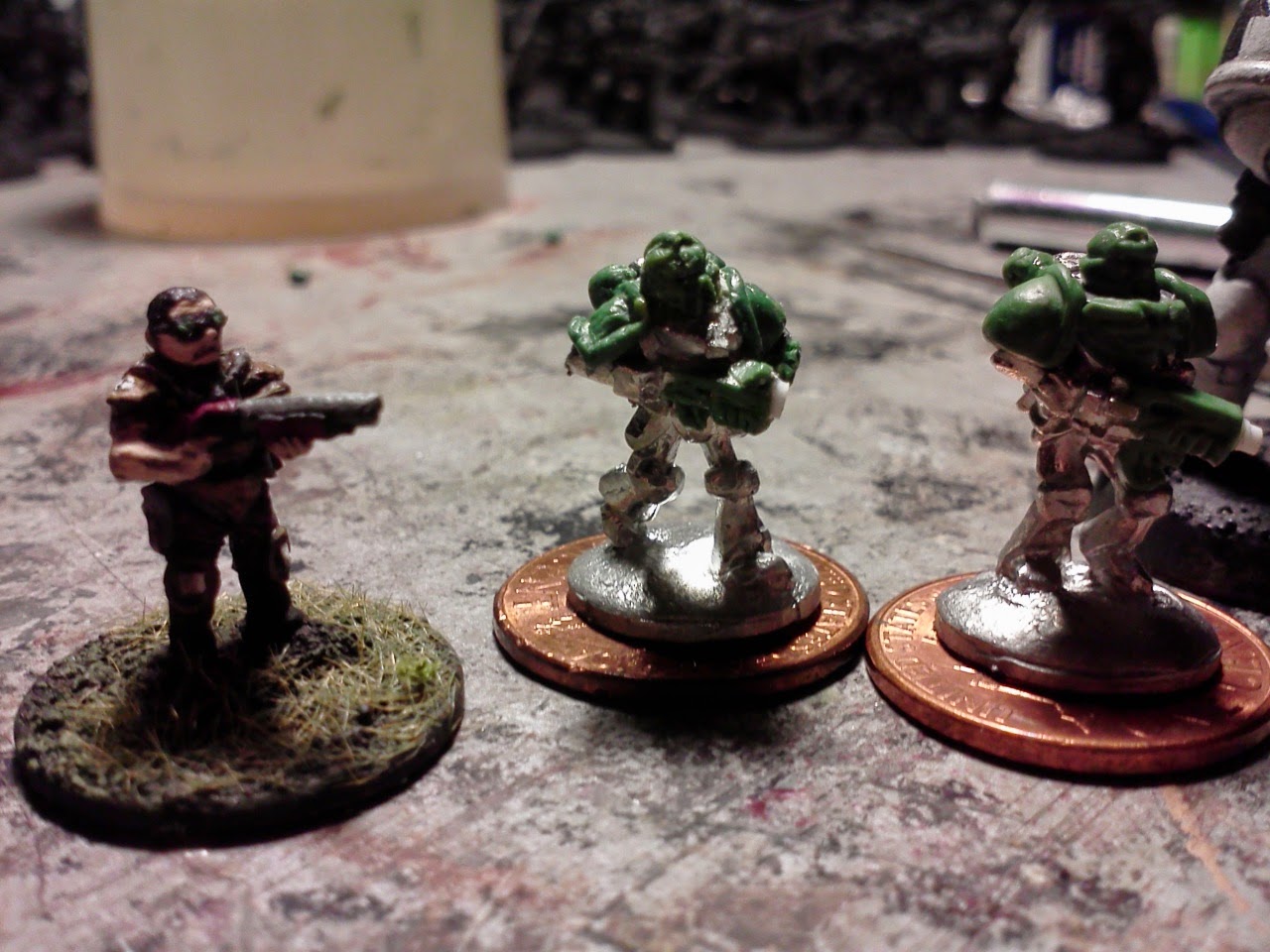 The one on the far right was done by Chris.
Posted by Impcommander at 10:39 AM 3 comments: 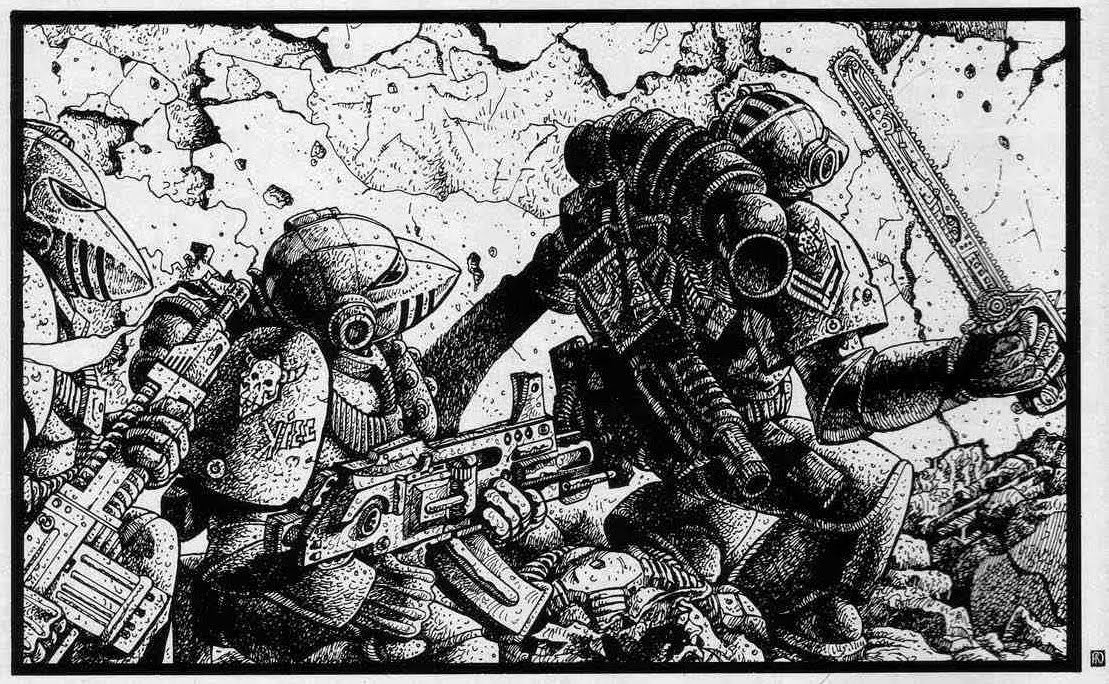 Synopsis: Megnara is of a mixed temperate, and is covered predominantly in forests and high rocky mountain areas.  Tracts of the south western hemisphere are given over to rich agricultural facilities,  and in the entirety of the north breaks into vast tundra and immensely deep ravines (some nearly a kilometer deep) that present rich mineral veins, and hot springs.   The planetary capital , and the only hive city, is  The Glisterbrug  {ja-glis-tur-barg} which rests in the idyllic “valley of pastels”.  The Planet is governed by Primadon, Quinn Vanders,  and sustains a local PDF garrison of  15 Regiments, positioned evenly across the planet.   Its primary exports are lumber, and mineral ore,  it has a relatively low tithe rate for the Adeptus Munitorum, as the Sub-Sector has been spared much conflict.

Situation: An unidentified force of Chaos Renegades, has landed in the planets Southeastern Hemisphere, and spread heretical teachings amid the populace.   The Megnarian PDF 8th and 11th Regiments are holding the Cultists and Renegade Militia at bay at several key cities and industrial complexes.  Estimated casualties are 250,000 and are primarily civilians.   The remaining Megnarian PDF regiments are marching to the hot zone but are several weeks out, as they lack sufficient vehicle transports.  A Flotilla of Chaos vessels hangs in orbit, above the hot zone, but is under sustained pressure of the local Naval command.

Plan of Assault:  The Imperial Fists will deploy among the Regiments of the Imperial Guard, to supplement their forces during stage 1 of the ground operations.  Upon arriving planetside, Imperial troops will assist the 8th and 11th Megnarian in holding the line, until the rest of the PDF arrive.  Once this occurs, the fresh PDF will be subsumed into Imperial Ground Command and all forces, save for the 8th, 11th, and 1st Megnarian,  and the Elter’s World 90th, will push the frontline forward 10km to “Phaseline Alpha”.

Once the push has properly tested the Chaos forces capabilities and located positions of Strength, the Imperial Fists will rejoin and attack en mass at these traitor fortifications.  This method of pushing, and surgical strikes will repeat until Chaos forces have been obliterated, somewhere around  Vurde {Ver-du}.

Rules of Engagement:
Civilians within the Hot Zone are to be considered tainted,  and eliminated where discovered.


The taking of captives will be acceptable only during the stage 1 push, to analyze enemy force composition and gather Intelligence.

I'm still thinking about what Chaos force i want to use, i think i will have it bolstered by a small contingent of Chaos Space Marines. I also don't think i want to use the Pilgrims of Rust, just to shake things up a little.

The artwork is from Rouge Trader and is used without permission.
Posted by Impcommander at 9:09 AM 4 comments: