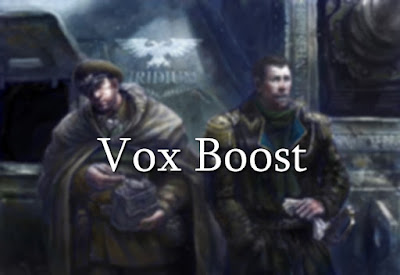 Just a bump, to promote some blog-posts centered around the 40k Narrative Campaign setting "Jornath" that I've been playing in for the better part of two years now.

Today I've got two posts both from fan favorite Chris, a veteran blogger and tabletop gamer who focuses on top quality miniature making and copious amounts of delightful lore, as well as the instigator of the whole Jornath campaign!

The first post Martial Traditions of Usamiljen, is an in-depth look at the recruiting practices and broad strokes tactical doctrines of one formation of the Imperial Guard found within the armies of Jornath Imperial defenders.

The second post Without Number... looks at the groups most recent outing, a brutal large scale apocalypse game where the combined forces of the Imperium launch a desperate counter-offensive to effect a breakthrough in the Siege of Fort Behras. A game I will be covering here on this blog just as soon as I work through my back-log of other AAR's

As with all Jornath post's, these will be compiled under the "Jornath 40k" tab in the search bar at the top of the blog, where you can view the battles, lore, and formations of the setting as they are published in chronological order according to the timeline of the setting

I hope you enjoy the posts!

Posted by Impcommander at 9:50 AM No comments:

Hobby: Stormknights of the White Wolf

I was thinking of playing AoS in the old world. Jd and some of the guys at our local GW concur. I could see the Stormcast Eternals being an experiment from the college's of magic by Teclis that uses the best and bravest of the empire knight houses and gives them magic powers and brutal strength. The motivation being Archaon and his boys coming down and kicking ass during the storm of chaos. The empire is left in ruins after fighting off Nagash a few years earlier and a wave of pro-chaos Skaven clans sacking Altdorf the year before Archaon comes in means he's really successful. Rumors of Sigmars return are rife in those times, and many suspect a final victory for chaos. The reality is not so much victory but a stalemate. Glottkin, a mighty chaos general in his own right betrays Archaon as the chaos host reaches Reikland, and gets bogged down in a number of costly sieges. Internal divsions starts fracturing the chaos warriors, and strikes from the stormcast prove vital in dissolving the chaos cohesion. For their vital role and their devout resolve in their God kings name, the new age post-archaon invasion is named the Age of Simgar. Chaos warbands now reside in the south, particularly in the ruins of Middenhiem and Kislev The empire rebuilds.

I prefer to think of the old setting in terms of modeling, and while I miss the regimented blocks the new system is frenetic and enjoyable. I'm sure the new mortal realms setting is interesting but I prefer the more traditional tolkienesque map.

So I picked up the cheap little battle pack "Storm of Sigmar" with 5 Stormcast and some chaos guys, split between myself and as mentioned before JD. 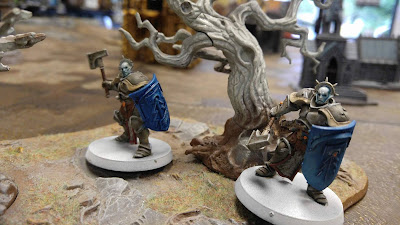 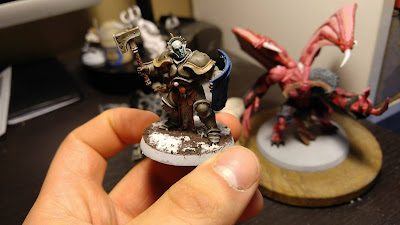 I'm happy with how the majority of the model came out, I do think I want to revisit the shield, however, it's far too blue.

I did some experimenting with adding greatsword pieces to the Stormcast as well, and I do really love the results. 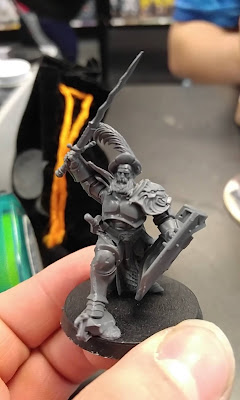 Posted by Impcommander at 9:45 AM No comments:

A piece of terrain that I finished a few days ago to serve as a "vital objective" during the apocalypse game I mentioned in a previous post.  The general idea is a service bay where they repair train engines outside of the local fortress/vineyard.  The structure is generic enough that I could see it finding a place in hive city boards or as part of farmsteads etc. as some type of garage or dock.

Its an extension of my desire to have more (relatively) intact buildings on the table. I think a little room clearance adds some excitement to a guardsman's day, and I find it hard to rationalize why I'm sending my troops to recapture a totally reduced city in most games. 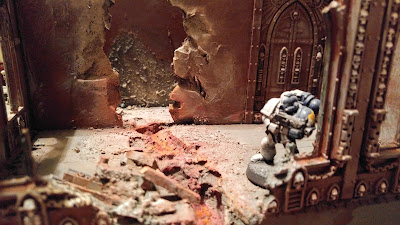 Damage from a lascannon blast on one side of the building, being surveyed by a brother from the Marines Errant, which was painted by Chris and eventually found his way into my possession through the murky shifting of time. 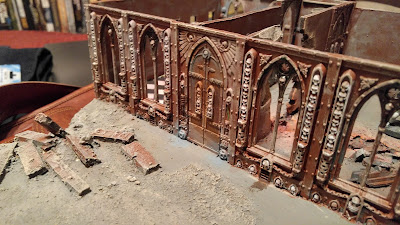 Door to the offices, from the workshop floor 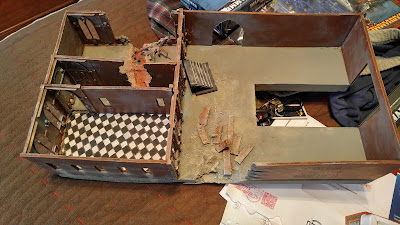 building overview. the stairs are high enough to reach the gothic archway from table level. Forgot to pull them out before I took the picture 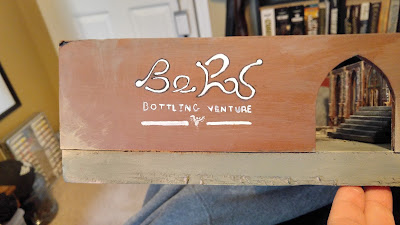 Not even the Imperium is able to avoid the tendrils of capitalism it seems. 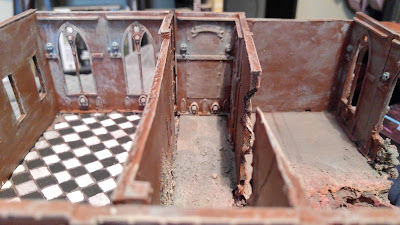 Shot down the main hall 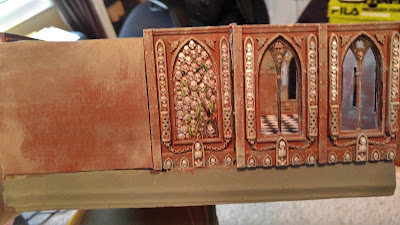 A view of the back wall exterior. 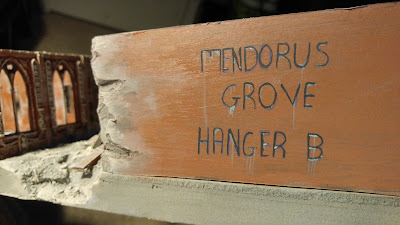 A utilitarian sign, without flash, and clearly not very clean. 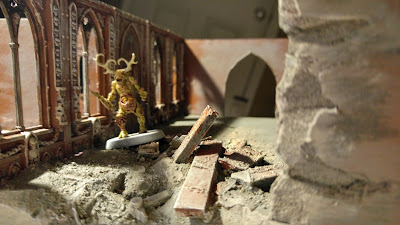 A battlecannon shot through the side of the building, serves only to slow the shambling form of the Plaguebearer.

Posted by Impcommander at 8:39 PM 3 comments:

In preparation for a mighty apocalypse game in the Jornath narrative campaign. I figured I really ought to apply some paint to the various heap of Orkoid bodies and vehicles littering my room.

The model is the Boneyard Truck from Ramshackle Games, that I've added some coffee stirs, plastic canvas and Niz the friendly hype grot too to bring the mini some more character. I wanted to try out the GW technique for doing rust now, with Typhus Corrosion/Ryza Rust Dry/ Runefang and compare that to how I've been attempting rust in the past. All told the thing came together quite quickly and I'm happy enough with the results. After all, it IS an ork vehicle so it's not going to be on the table particularly long. 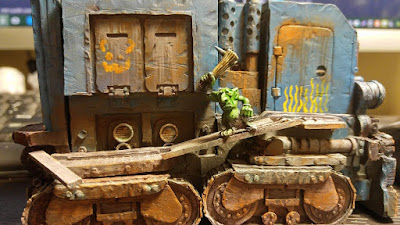 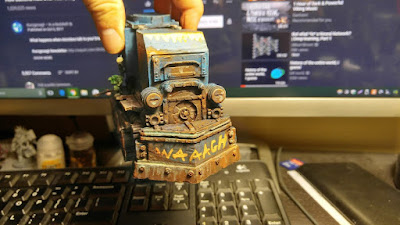 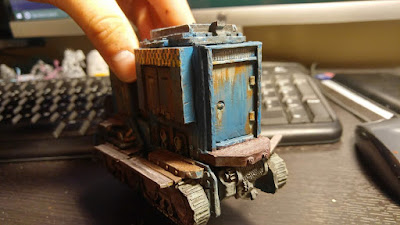 Just a short (not quite so wordy) one today, I'll have the post up for the apoc game up hopefully by the end of the month and two other large-scale Jornath batrep's up between then and now.

-Your Favorite Madman-
Posted by Impcommander at 9:36 AM 2 comments: