If you follow Chris' blog,  "Sippin on Paint Water"  then you will no doubt have heard already about his modern 15mm setting, in the fake ex-soviet satellite state named "Guusepria" which borders Georgia, Azerbaijan, and Russia.  To make a national history short, the old beloved dictator has passed away, and his son, being a bit more crazy, has taken power. He is less than an ideal leader, and due to a series of events, a civil war has broken out, between  the  "Federals"  under the totalitarian government of the Guuseprian dictator, and the "Fundamentalists" who are being called "Rebels" for short, who are a disgruntled branch of the Guuseprian government, allied with various milita groups.

I've decided to start a regiment of Federal's, which you might remember from a bit ago, but anyway, here is a new pic.

I present to you, the 37th Motorized Rifles. All told there are 2x  Unimog transports   and 16 riflemen.

I've recently gotten some support teams, from Chris'  and a few troopers who will probably be "village defense forces". Which will be after the CMI repaint/conversion project and the Fantasy Regimentals project.


anyway, thats all for now.


-Your Favorite Madman-
Posted by Impcommander at 7:06 PM 5 comments:

The Road to Orleans: Battle of Saints Hill, Days 1 & 2

After the British victory at Boggy Marsh, they pushed through the polluted and toxic bayou's of the French countryside to within 50 miles of Orleans. They camped within sight of the French ground defenders, who had thus far failed to stopper their momentum. Early the next morning the British, made ready to capture a key strategic point on the outskirts of Orleans, dubbed "Saints Hill" , it is the overgrown ruins of a former cathedral.  It would afford a magnificent command and control point for future actions, should it be taken...

Order of Battle for the first day.

The primary objective would be the center ground of the battlefield which was the wreckage of an old steampowered warmachine.


A shot of deployment 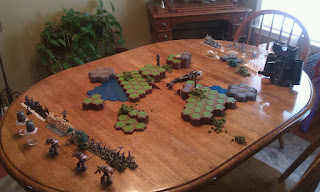 the towering shape of Songbird mk 2 can be seen clearly. The entire british line, save for the steam machines move forward.  Opening shots are traded between the two armies. 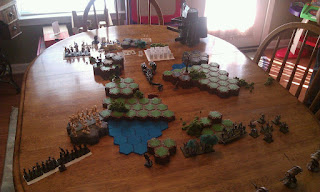 The 7th Dragoons take Saints Hill proper, and the lines continue to blast at one another 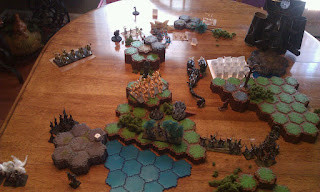 Swarms of Bayou rats burst forth and tie up the Support elements of the Royal Guardian Crops with killing the pests for a turn or two. 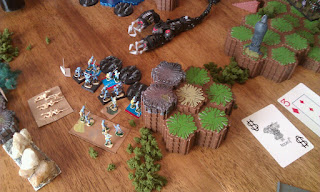 As the battle reaches to a fever pitch,  Teague climbs the hill and bellows a challenge to Bosch. As the engagement rages on around them,  Bosch and Teague fire pistols at near point blank range and charge one another with sabers.  In a savage duel Teauge is struck down. 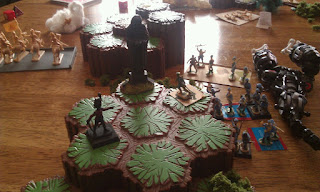 Rushing to the aide of his Captain, Cromwell gallops up the slopes of the hill taking rifle fire from the RGP, and once there, engages and critically wounds Bosch. 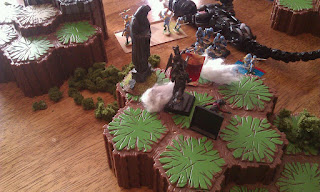 Then in a fit of unexpected and horrifyingly destructive madness, Professor Vesuvius, fires all guns at Saints Hill, eradicating the hill itself, and throwing the stricken commanders into the dirt around it. Effectively stopping the battle for several minutes as the sheer amount of dust and debris kicked up by the explosion obscured vision. 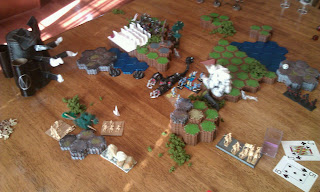 A view from the 4th Sparrows, just after the destruction of Saints Hill 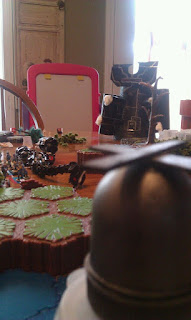 The Great Army fight the Morts-vivants in the eerie artificial twilight of the dust choked hilltops. 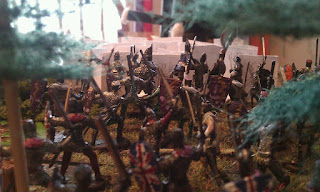 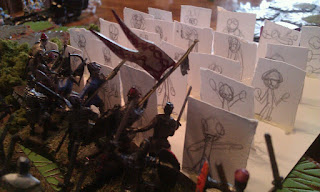 With their Officer in command W.I.A , and with RGP squads flooding the center ground, the British beat a hasty retreat, their momentum gone, and prepared for defense. 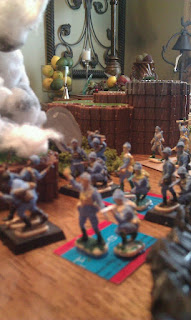 The Second day of battle, took place around 800 meters away from the original deployment of day 1.   French commanders, shocked by their unexpected victory, moved as many reserve troops into the Saints Hill region as they could do quickly.   The British commanders followed suit, to stop the French from breaking through back to Boggy Marsh. 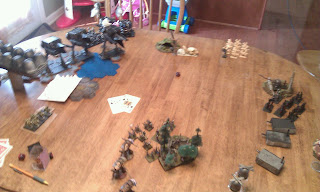 The Armies wasted no time in trading blows with one another and many died in the opening barrages. 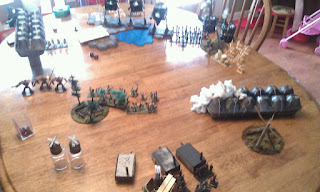 A well placed shot from the 12th armored, sent the first of two bomber barges, crashing to the ground, though it is belived that the pilots may have been responsible for guiding the craft into its final dead position, as it effectively killed 50 % of the 5th foot during its crashed, and covered the British deployment in smoke, and possibly dangerous explosives. 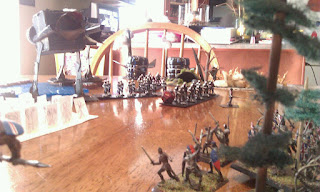 Stark Sires, and Morts-Vivants move to counter the charge of the Great Army and Steamknights 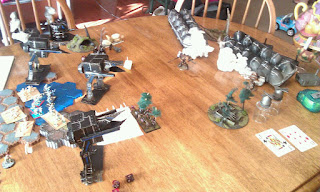 With a hiss of their penumatic legs, the Steamknights leap onto of a floating bomber barge as it shells the combatants below. The pilot and crew resolve to follow their sister ship and drive the bomb laden craft into british deployment. killing still more of the unfortunate 5th Foot, who have at this point only taken casualties by massive falling sky vessels.  The vehicles and aerocraft of the british, are able to move out of the way prior to the crash. 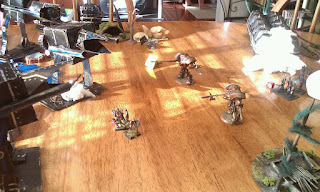 The Second day of combat proves to be a tactical draw, giving no momentum to the French.
The center of the field proved to be a horrid slaughter, seeing the Great Army, 7th Dragoons, Stark Sires, and 8th Morts-Vivants  slain to man. mostly in close combat.

making this battle not just the most brutal battle of the campaign, but also probably the most important and critical in the war thus far.

Next game is Day 3. Where the British will attempt to rally and regain the momentum from the French and breakthrough into Orleans.

Hope you all are enjoying it as much as we are !

Posted by Impcommander at 6:28 PM 4 comments:

For the past six weeks, Conclave troops  have been battling on Vernada against the Volocheck Respublik.  They have been beaten to a pulp, with troops scattered all across the city, the last few commanders and vehicles made their way to a rally point.    But this would be no ordinary last stand...  the sun of the Vernada system was about to go super nova, in exactly 5 minutes.


The Rally Point?  The only star port on the planet.    The Conclave troops would die, but they would drag every last Volocheck on the planet to hell with them!


In the last minutes on Vernada, before the shockwave of the star ripped the planet asunder. the eerie half twilight was light by the muzzle flashes and blasts of tank shells. 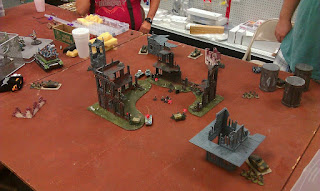 The Last image of the Vernada star port


In all actuality the stores power was knocked out by a storm, which made us end the game early. so we made up this ending mutally. Hope you enjoyed the mini story !
Posted by Impcommander at 3:22 PM 4 comments:

Ready to Unleash Vengence of a Darkened Variety ! 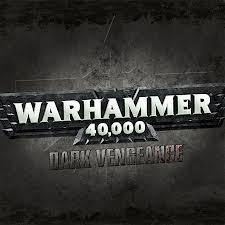 Hey all, i got the 6th Ed starter set w/ the fancy chaplain  this Saturday and it is worth every single penny. Its a fabulously nice looking box and gets me very excited and hopeful in new GW stuff.  Im going to try and get some more 6th edition now that i have the book, and i was playing with the idea of asking the Game Group if they would be interested in an "small" apoc game,  we'll see how that pans out in a bit.


I played another step in the "Road to Orleans" VSF campaign with JD today, i'll post that batrep tommorow for you're reading.


In addition i've painted up a few Federal Guuseprians for Chris  (from Sippin on Paint Water) 's  Modern 15mm setting, which you should really check out along with the rest of his blog as he's quite talented and extremely inventive. 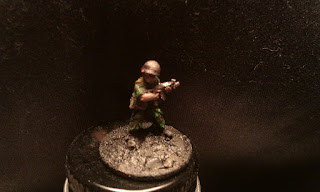 Also, if you haven't already, you should check the game of my own design :  Regimentals.  a RPG/Wargame.


-Your Favorite Madman-
Posted by Impcommander at 4:36 PM 5 comments: