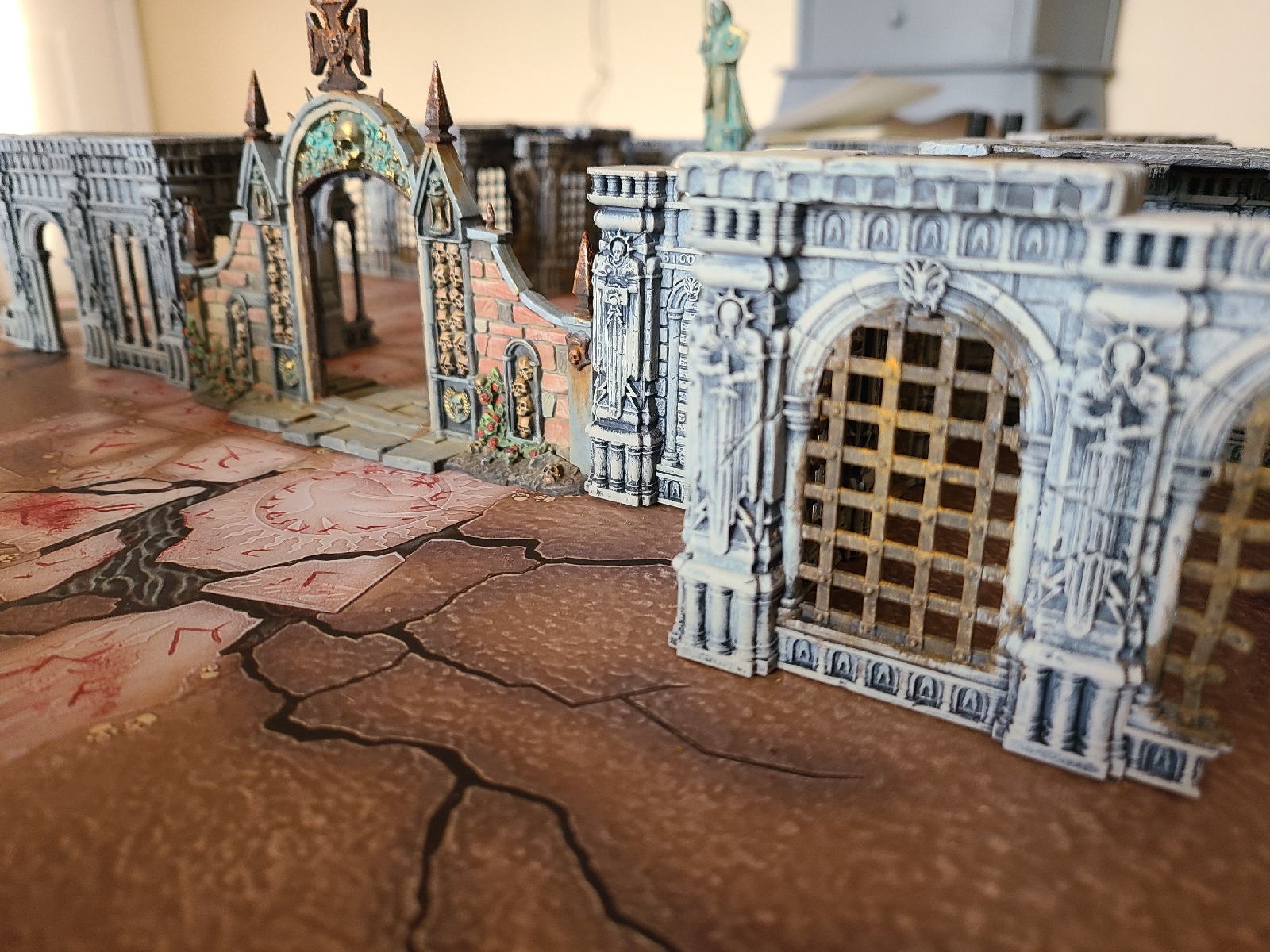 Happening 97 years before the War for Jornath. The liberation of Haspis Marina was the conclusion of the Indomitus Crusades effort to free the Vahland Sector from the dominion of Chaos, it saw the Grand Armada of the Imperium, plunge into the Chaos held Sector Capital system in a titanic brawl that lasted several months. In this solo play game, I explore the opening shots of the Liberation Campaigns Ground War as Imperial Strike Teams land on the Resort World turned Bloody Chaos Alter of Hosk to prevent the Chaos forces from summoning forth massed daemonic allies to halt the invasion 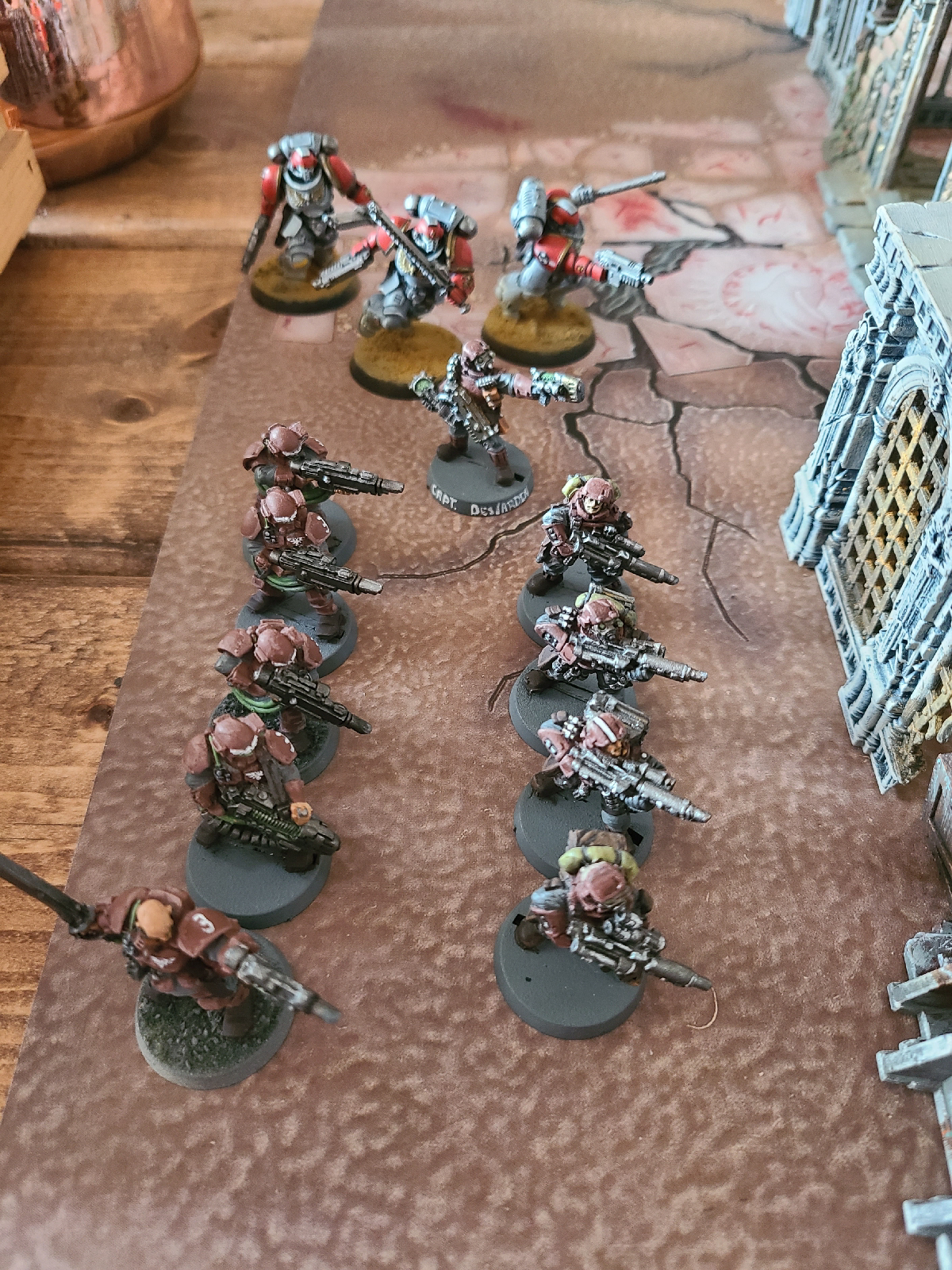 Imperial Strike Force,
3 Assault Intercessors from the Sages of Enmity,  a team of scions with plasma cannon and Sgt with power sword,  a tempestor (Captain Desjardin) with plasma pistol, and a 4 man scion command team with medic. 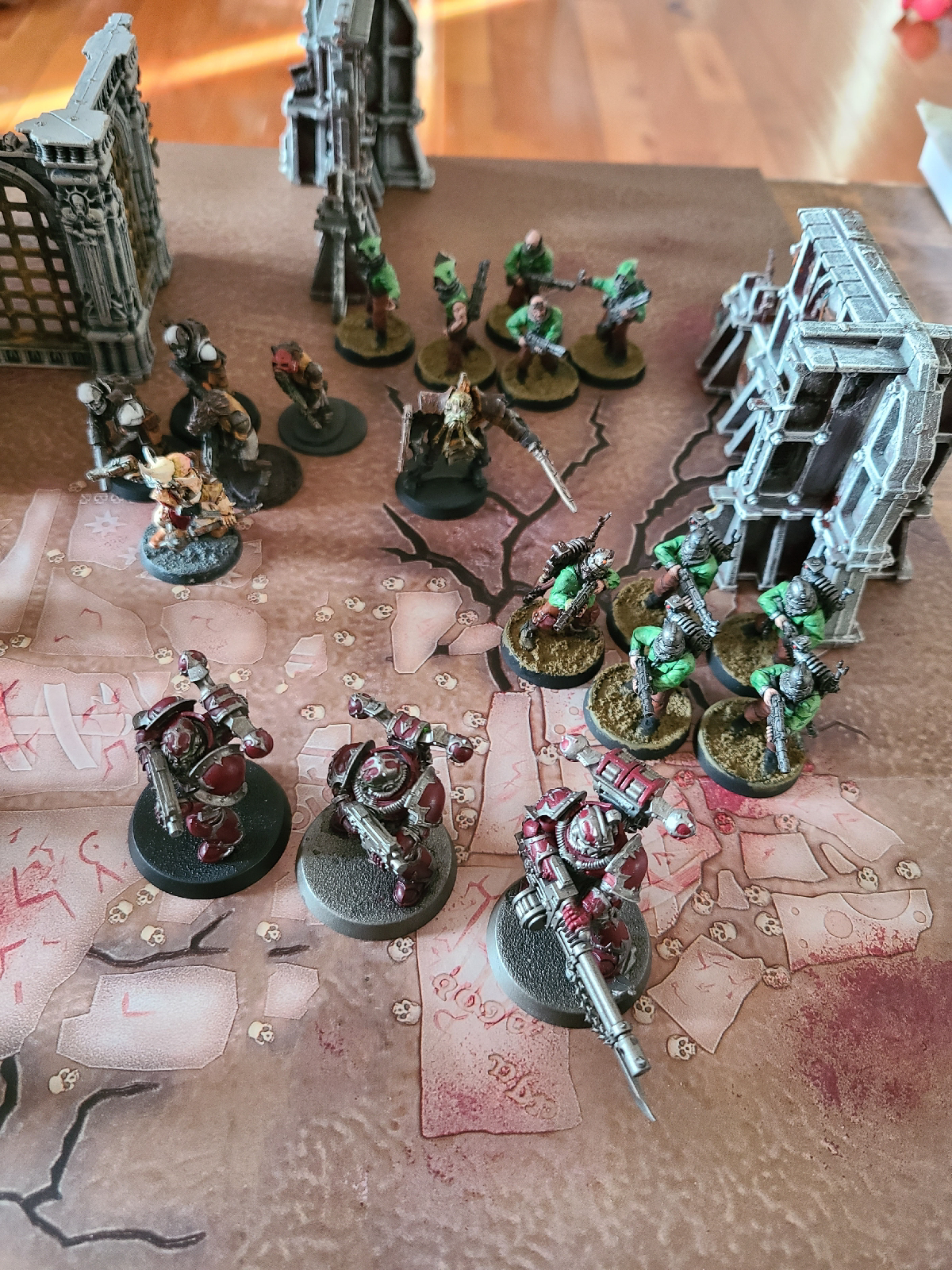 The Lost and the Damned,
3 Marines from the Word Bearers with a Reaper Autocannon,  2x Five Man squads of Traitor Guard (catachan rules) 1x 5man squad of mutants and Renegades (cultists with mark of nurgle) and  Daeg Steelheart, Mortal Champion of Nurgle (Company Commander with  T4, and 6+ FnP, and a power sword) 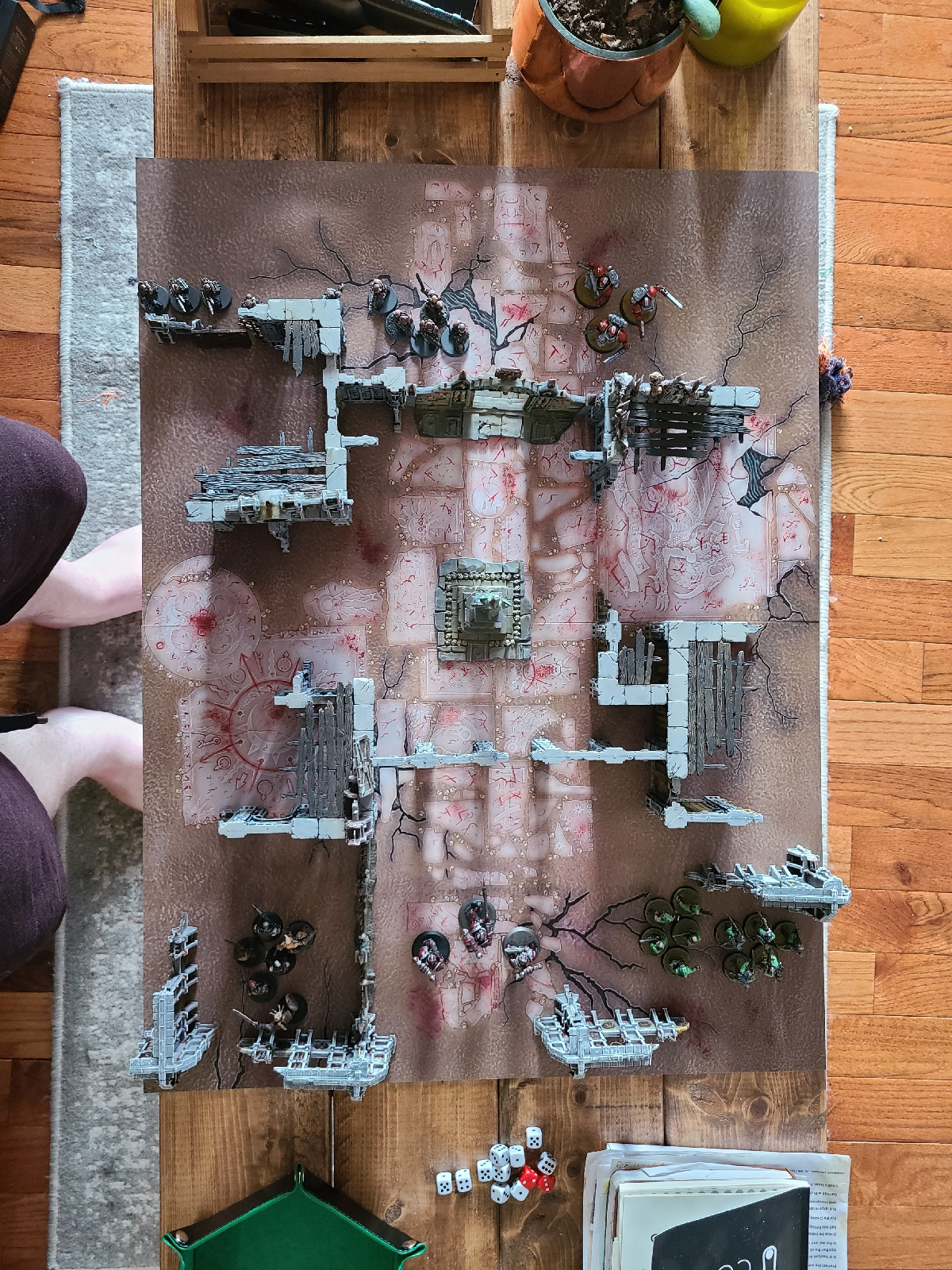 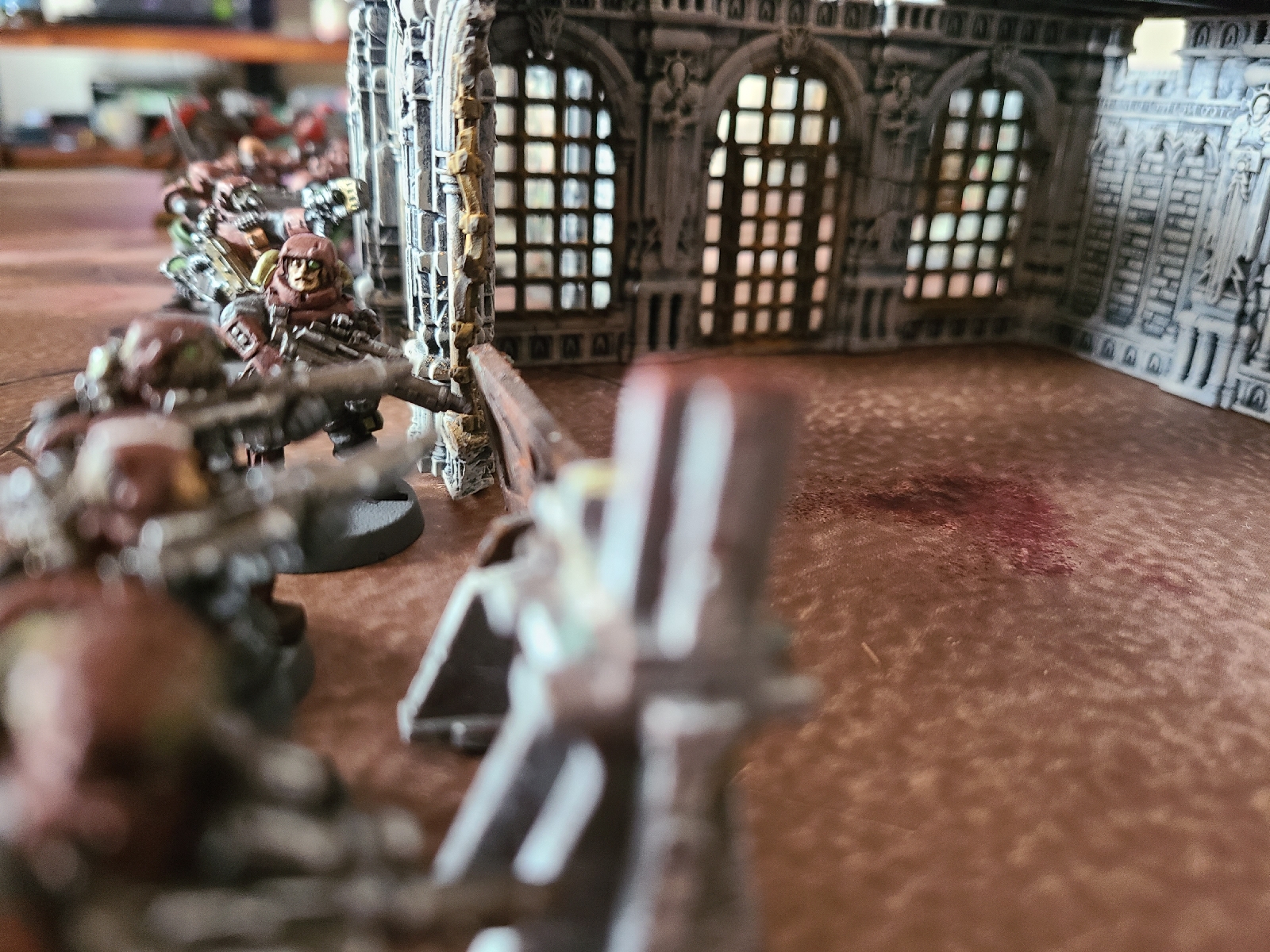 The Landings on Hosk were a brutally nightmarish affair, Hosk, the 6th planet in the Haspian System has been used by Chaos Worshippers as a blood soaked alter for their worst proclivities, where thousands met cruel ends as sacrifices to the Dark God's to bring forth armies of daemons to plauge the Imperium.  The Chateaus of the Sectors Elite have become temples overflowing with blood and adorned with the discarded corpses of tortured slaves.  Each of these places were targeted for destruction in the opening phases of the Imperiums Reprisal campaign to retake Haspis Marina, the Heretics had to be denied their otherworldly allies at every turn. 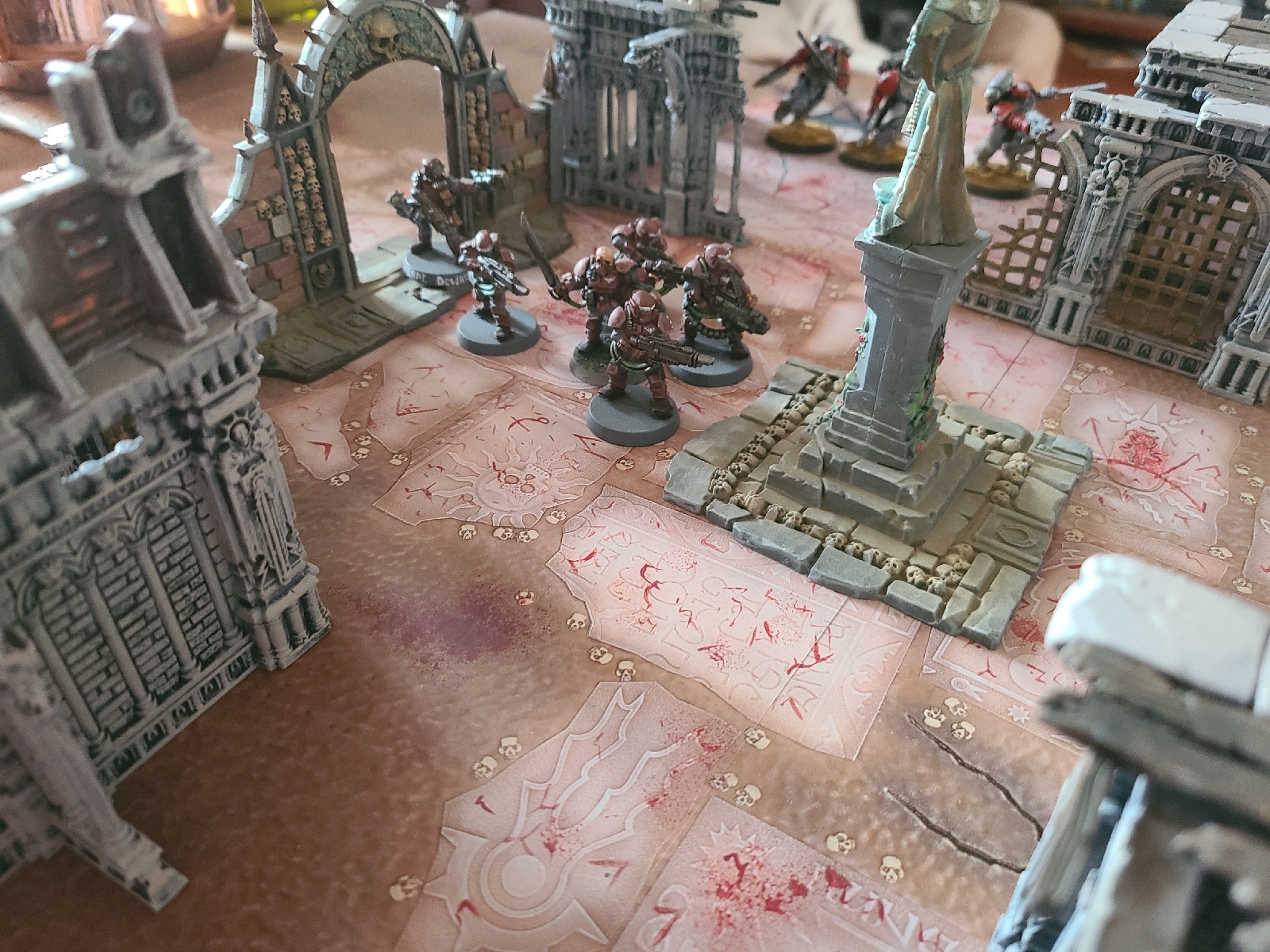 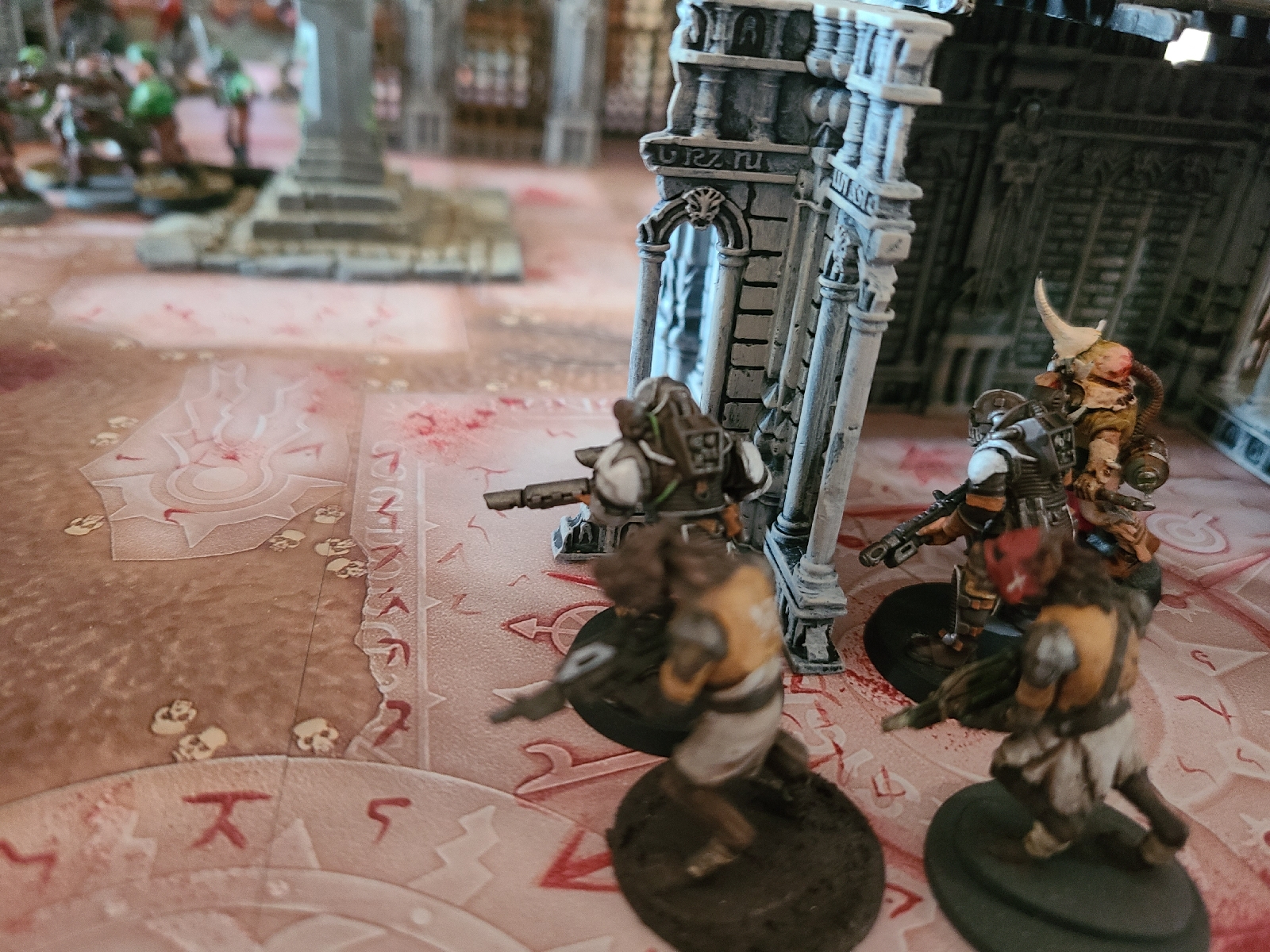 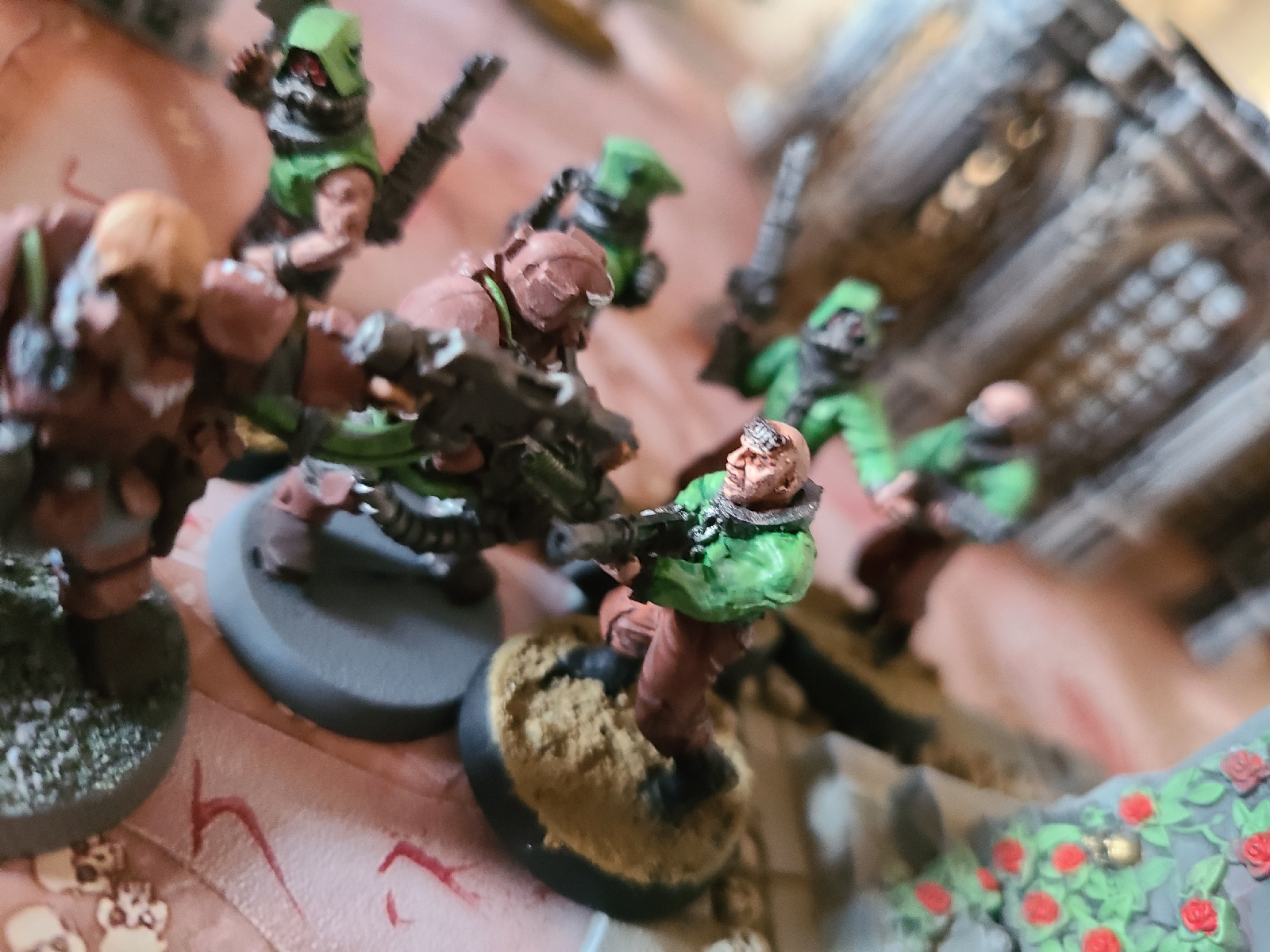 The Imperials storm into the temple. The plasma gunner immediately slays a word bearer, but the fusilade of hit shot rounds results in little else.  The Lost and the Damned respond with autocannon and lasfire in kind, killing 3 of the stormtroopers in the point squad, one of the Traitor Guard teams charges the ill fated squad, but neither can cause any kills 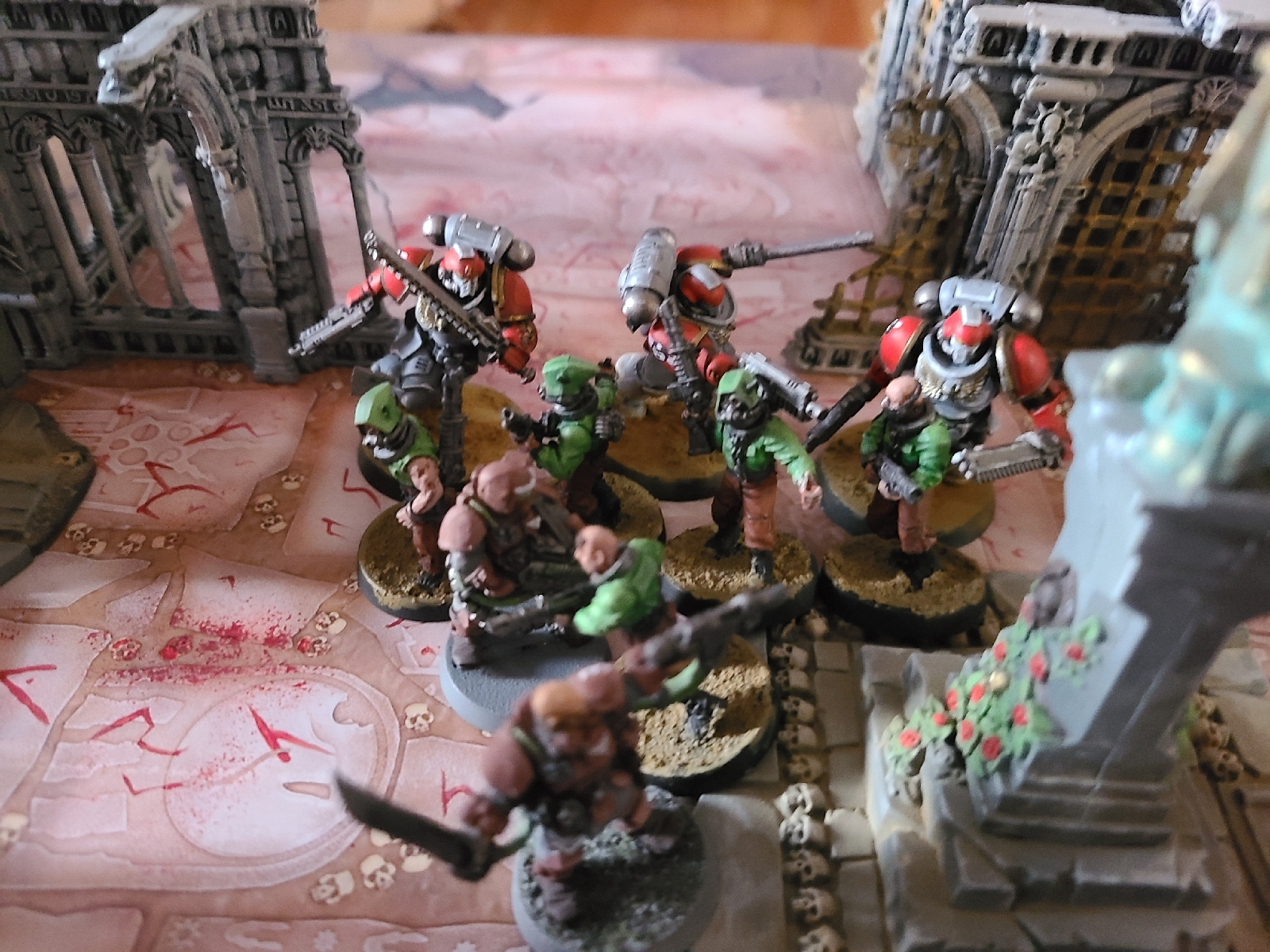 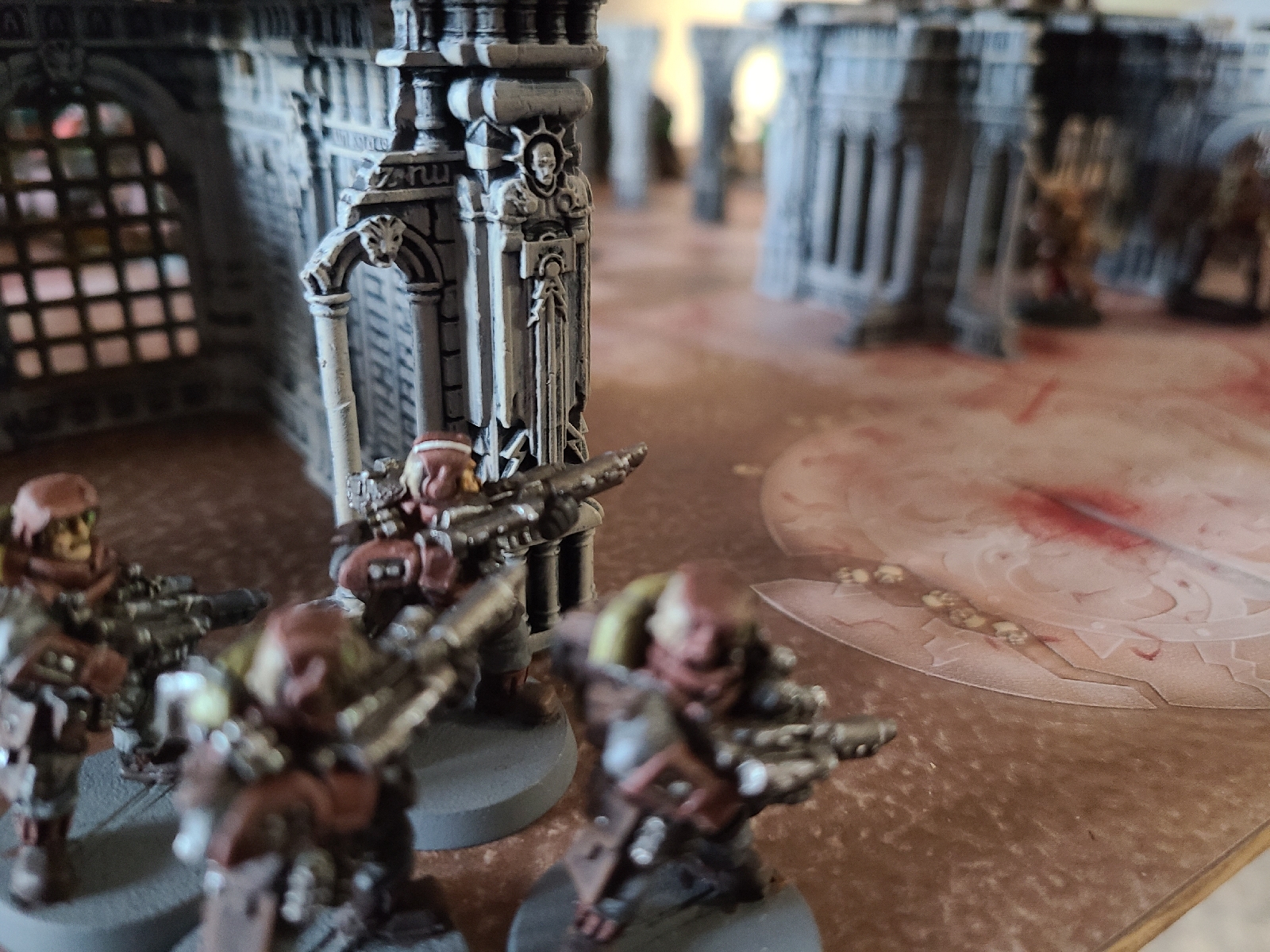 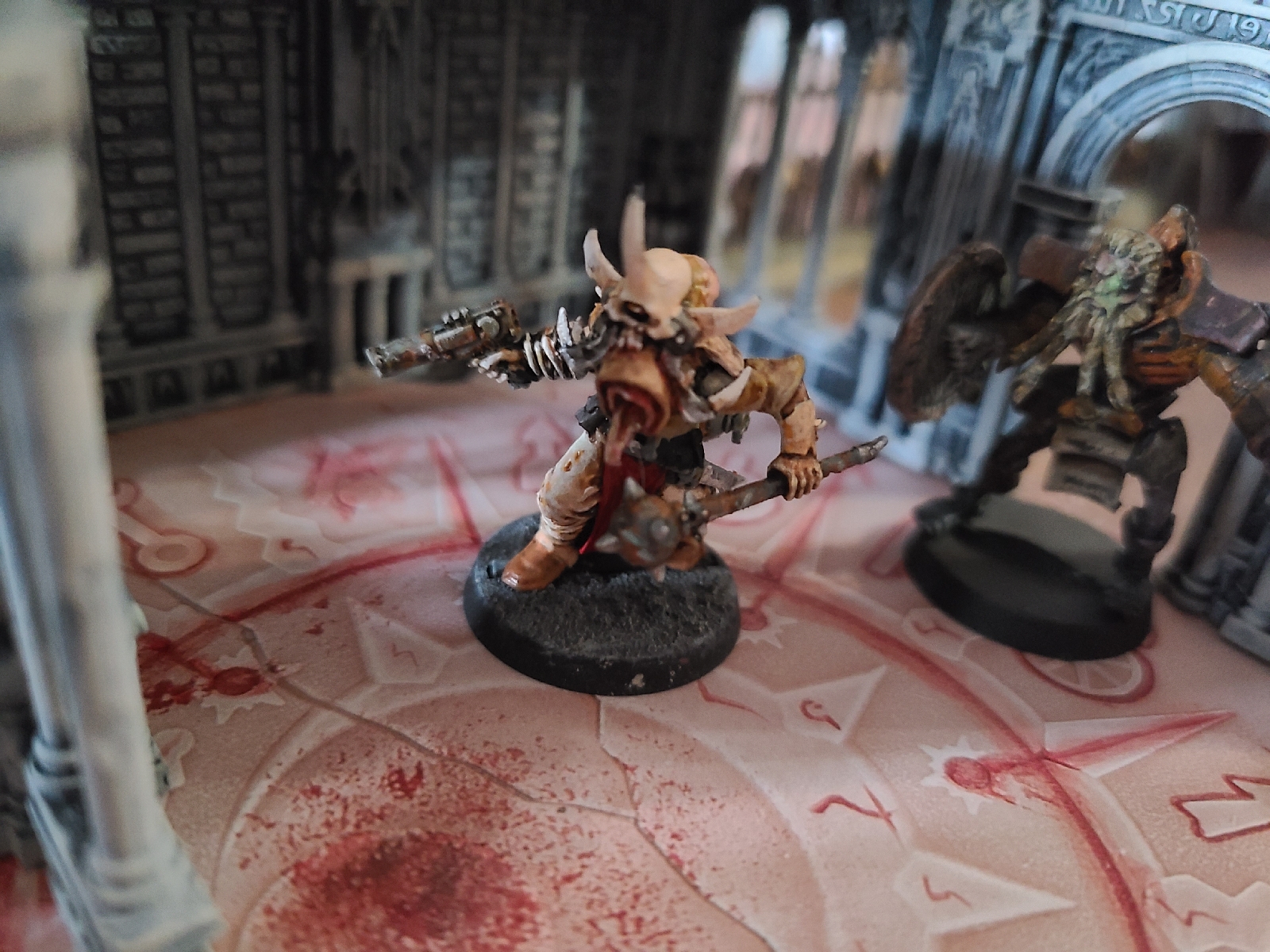 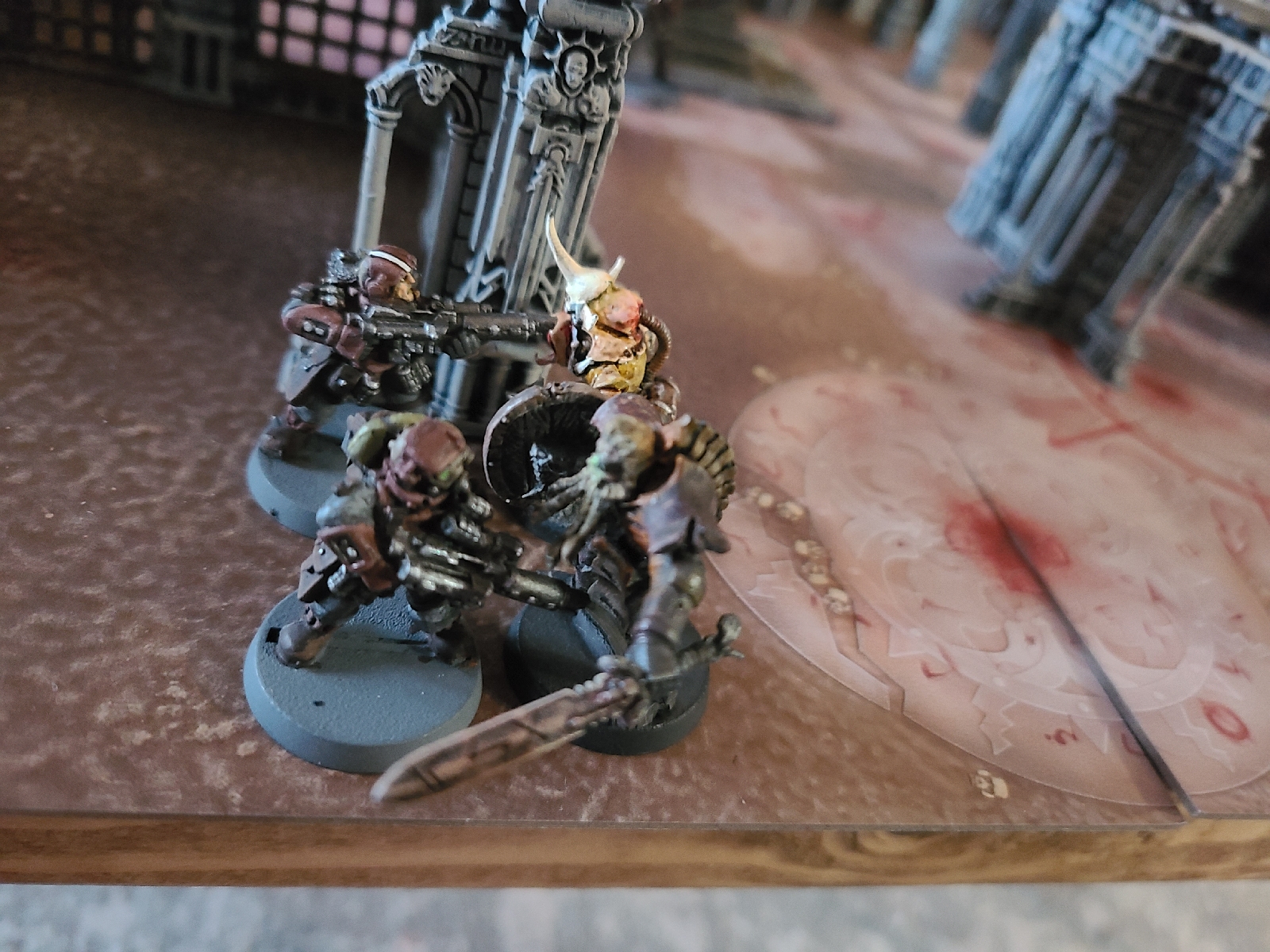 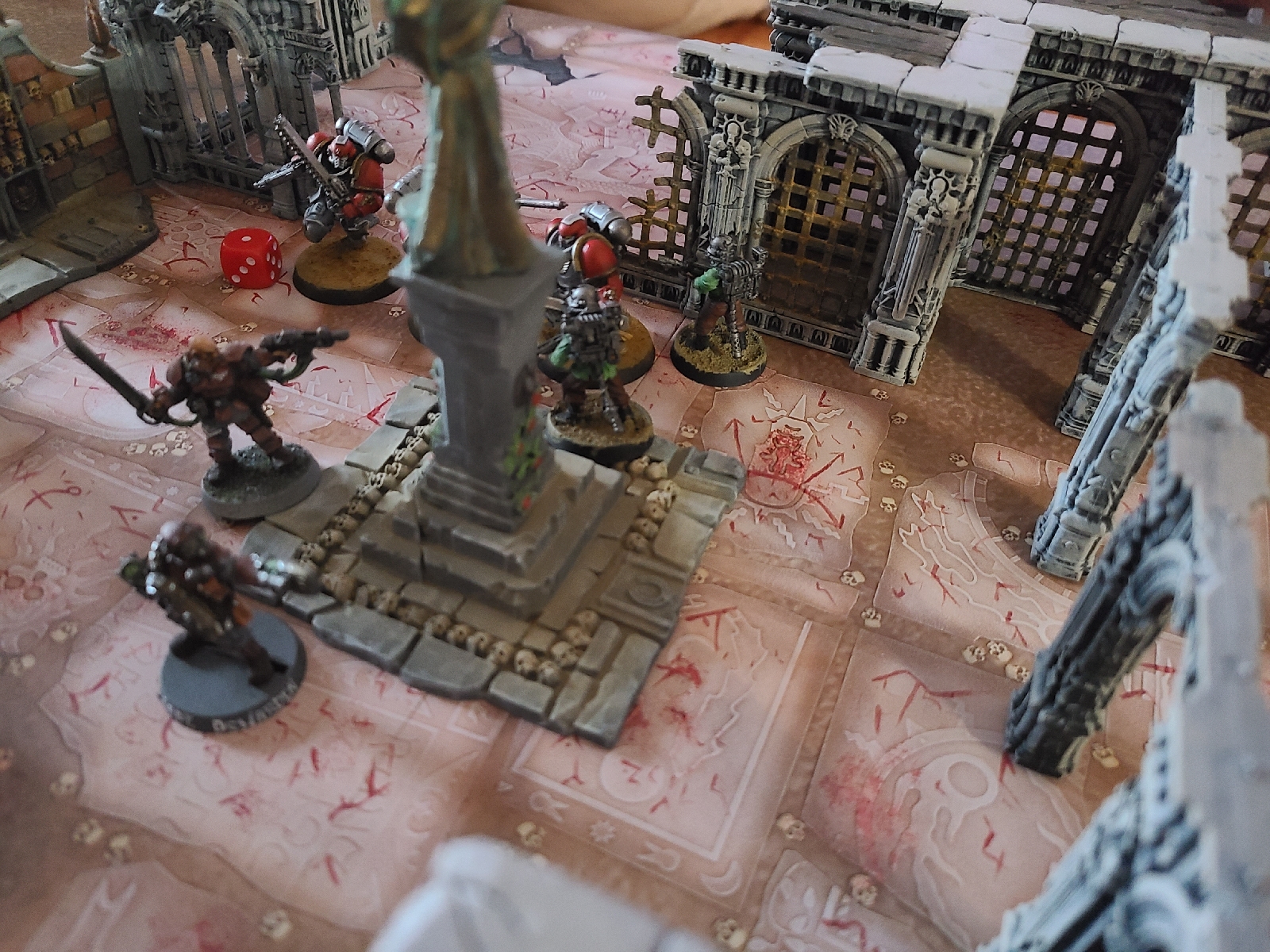 The Sages of Enmity sweep into the Assault, killing the traitor guardsmen only to be charged by another squad of traitors, the entry squads plasma gunner is slain by lasfire, on the flank the stormtrooper command team slays 4 mutants, and is charged by the last remaining mutant alongside Daeg Steelheart, two of the elite die at the hands of Steelhearts blade.  Autocannon fire wounds one of the Sages, and Captian Desjardin injures a Word Bearer with his plasma pistol 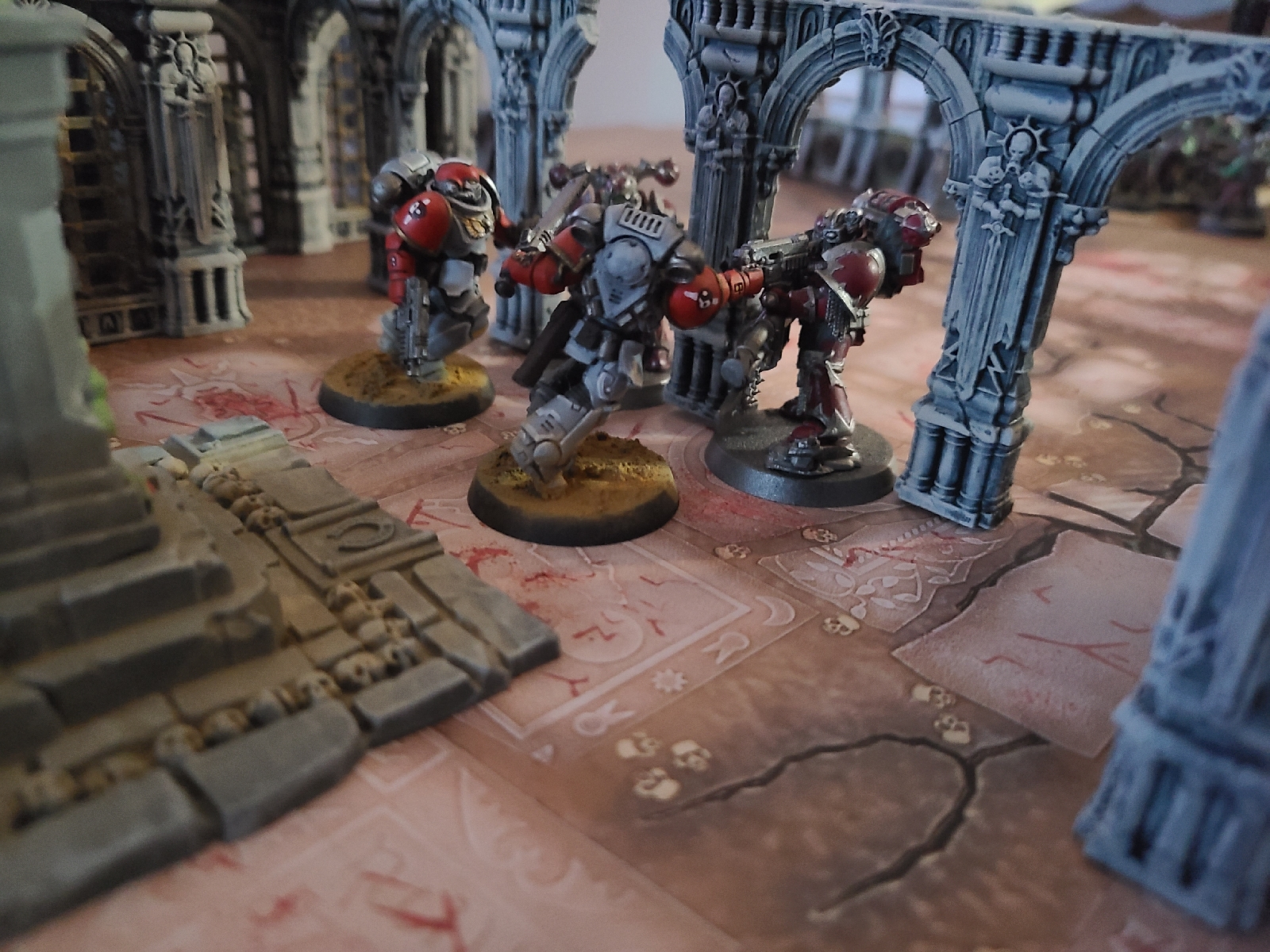 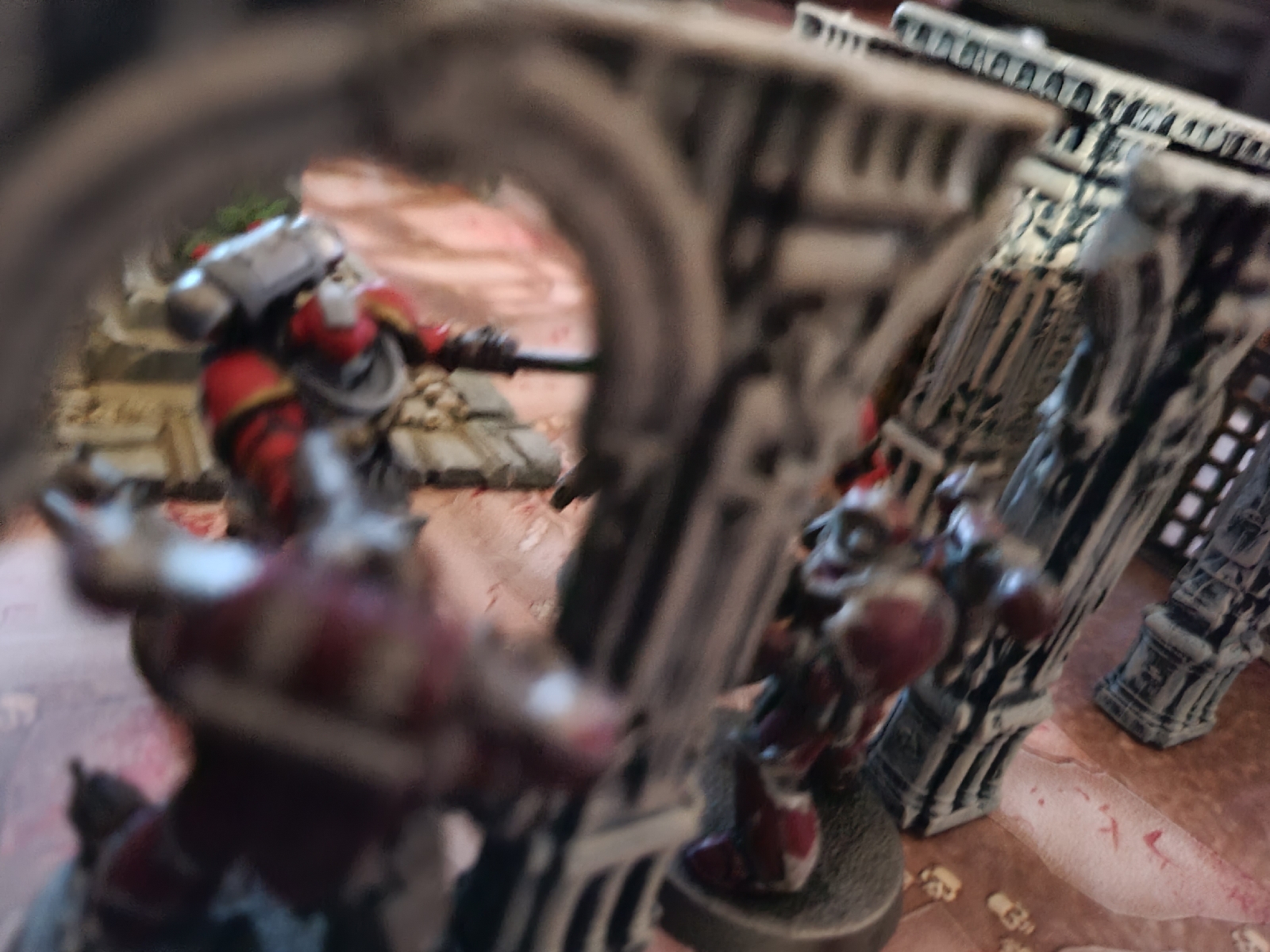 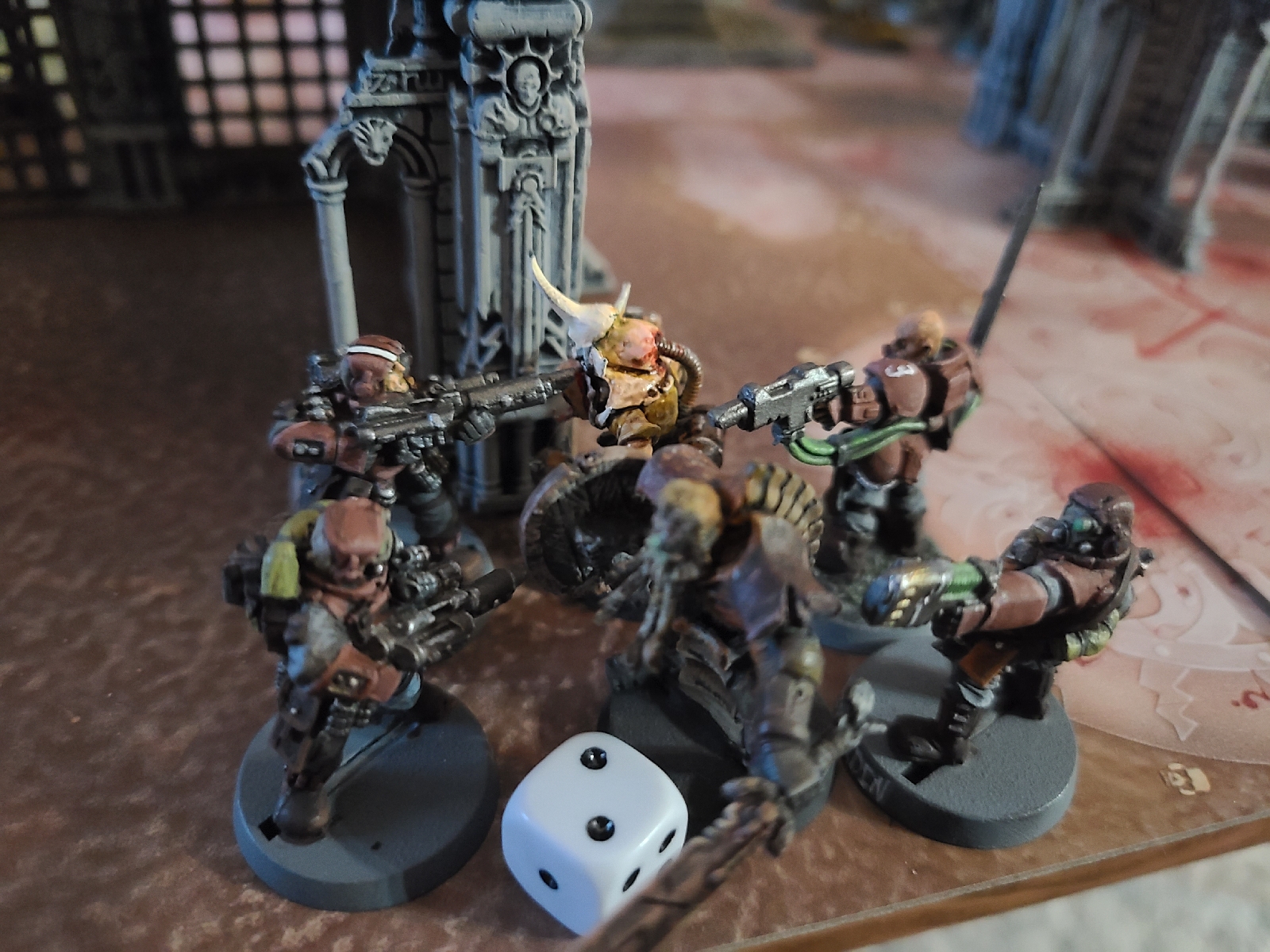 Captain Desjardin and the Entry Team Sgt break off and surround Daeg Steelheart, there is a fierce melee, in which the champion is dealt two wounds.  The Astartes of the Sages of Enmity finish off the traitor guard and move to attack the Word Bearers.  The Heretic Marines preempt them, and make their charge, killing one of the loyalist, and suffering no damage in return 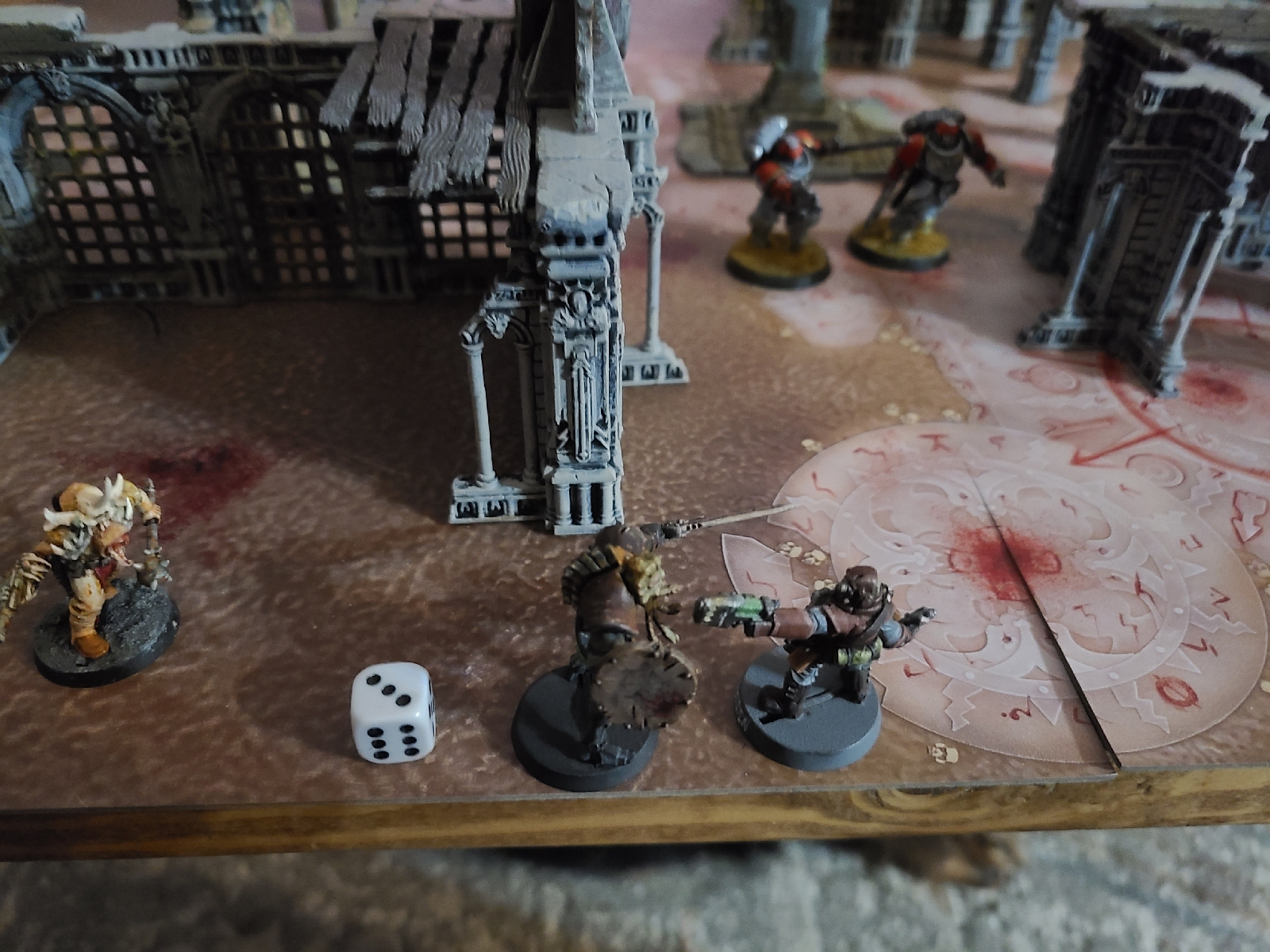 The Loyalist Astartes slay the word bearers after several turns of melee combat.  Steelheart slays the Entry team Sgt, and the lone mutant manages to slay both of the remaining stormtroopers from the command team. 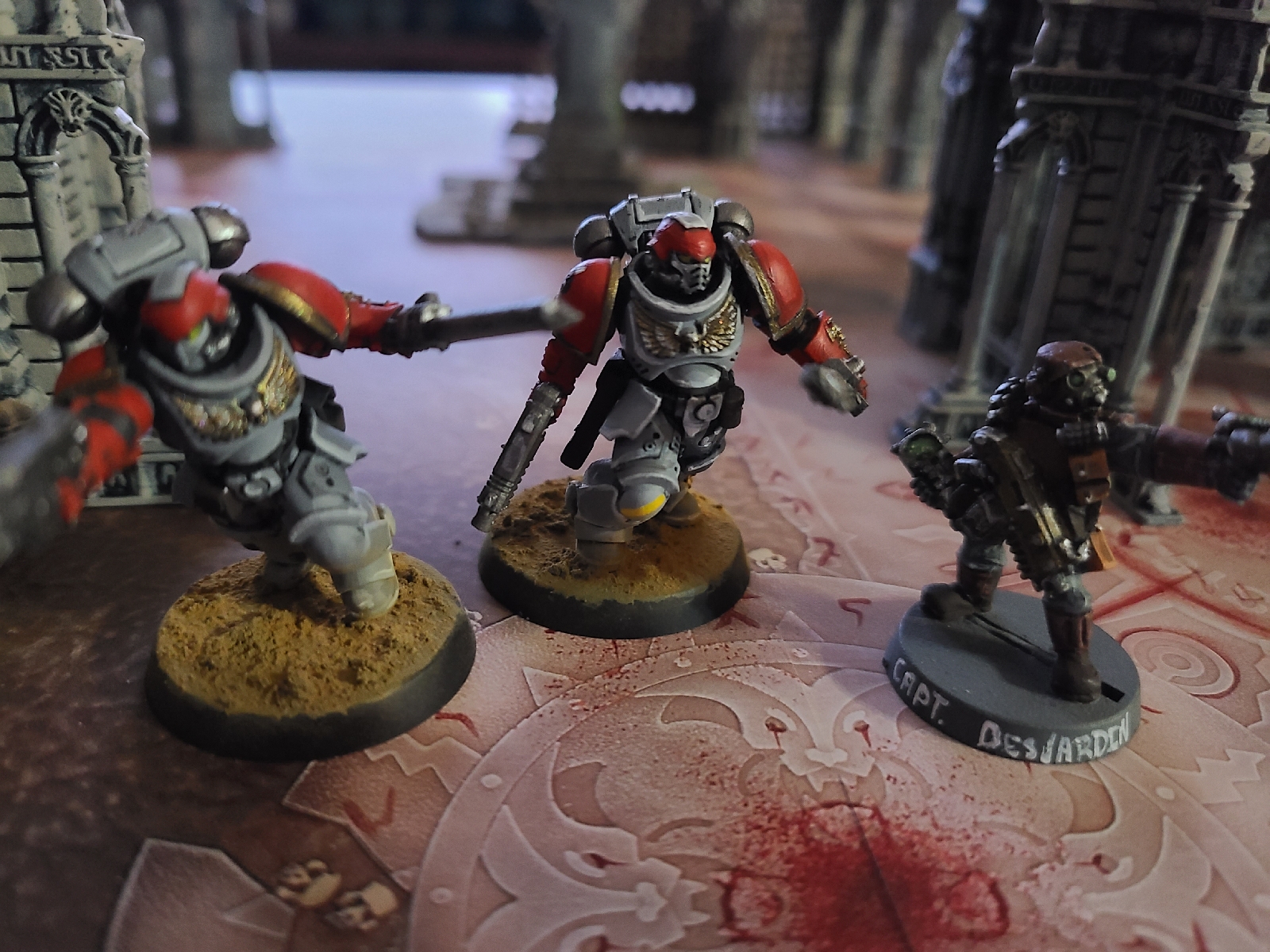