Overview:
The Emperors Scroll Seekers Chapter are a mysterious lot, they are known for their collection of significant human artifacts, which has made them many enemies within the Mechanicus as one might surely expect of such activity. But, they are not lacking in zeal and tenacious fervor for the God Emperor, and so their various quirks have not put them to far at odds with the Munitorum or Inquisition when it comes to persecuting the enemies of mankind. That is, until the events that transpired on the swampy Feral World of Zacadies.

In the waning days of 567.M41 the,  then Imperial World,  of Zacadies was embroiled in a pitched system wide engagement, against the Ork hordes of Warboss Jagsmakk.  While the Warboss's forces were suppressed and contained Zacadies never fully recovered, the western hemisphere went primal, devolving into savage tribesmen,  while the eastern hemisphere belongs to the survivors of Waaagh Jagsmakk.

At the beginning of 890.M41, a reclamation operation was organized with 4 regiments of the Astra Militarium, to scour out the greenskins from the Eastern Hemisphere, and secure sites for recolonization efforts. The Scroll Seekers 4th Company being 'in-sector', expressed a peculiar level of interest in the effort and made it clear they would aide the Guard assault.

The Assault begins well enough with low-moderate casualties, all Guard assets make planet fall and begin moving to secure their objectives.  The Scroll Seekers move and begin obtaining their own goals with little concern with other Imperial forces.

The Kingscrest Brigades' 2nd Company is advancing on a dilapidated water filtration plant, to secure the position and open the way for repair teams.  They are stopped suddenly by a small group of elite Astartes from the Scroll Seekers. Who demand them to turn back and leave the facility and its artifacts to them.  Captain Sallamis, not one to be bullied by anyone, especially when it means not completing an objective, states "This place belongs to the Imperium,  you will allow us to complete our objective or you will be fired upon". The reply is simple,  "We are the sons of the Emperor, we take orders only from his divine will. Turn back in thirty seconds or meet your demise."

Shortly after a hail of bolter rounds would rip apart a forward reconnaissance squad. 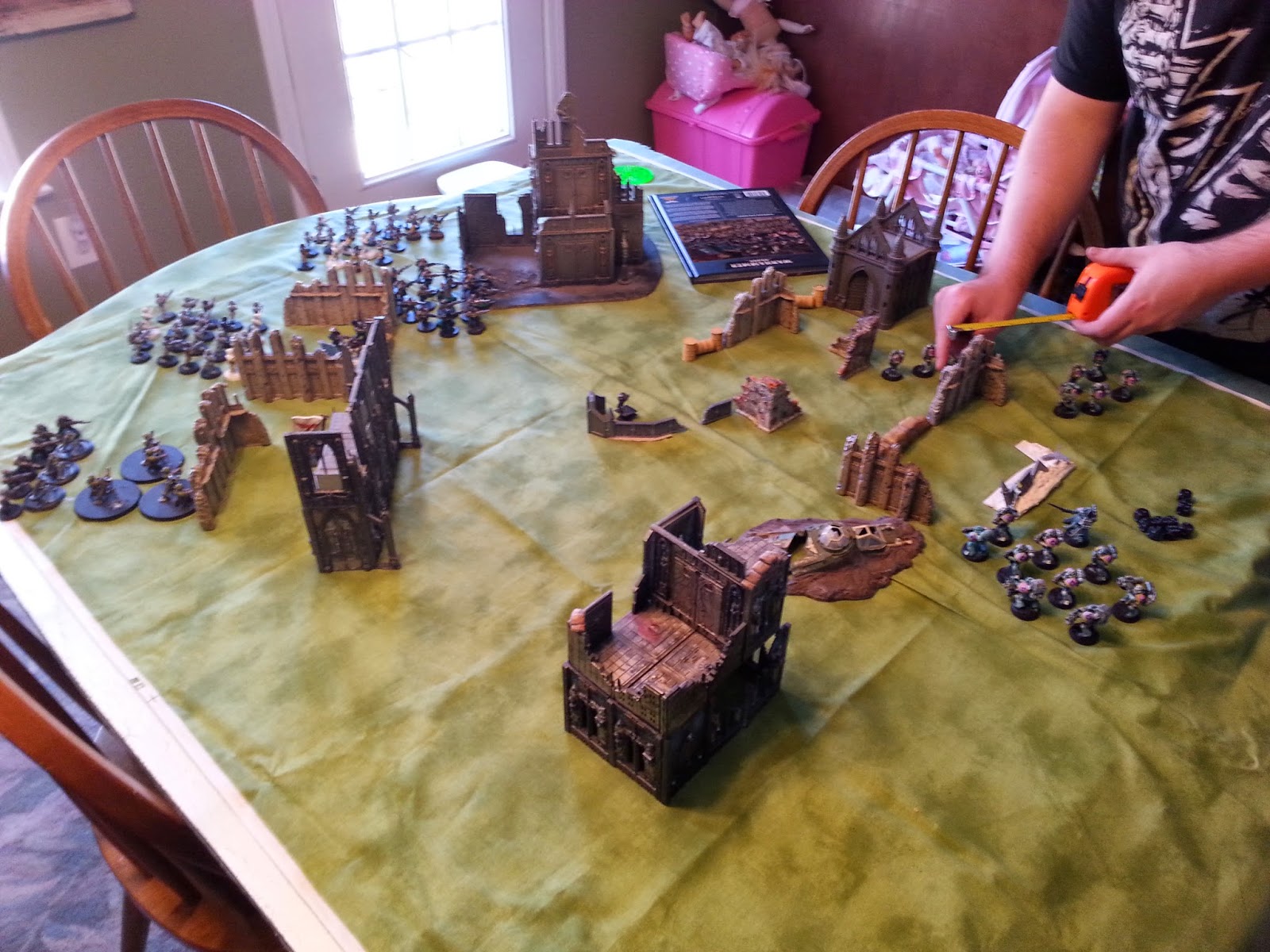 The Infantry on both sides make speed for the objective, a few blasts from the sentinels take a Thousand Sons marine, but ultimate little else occurs. 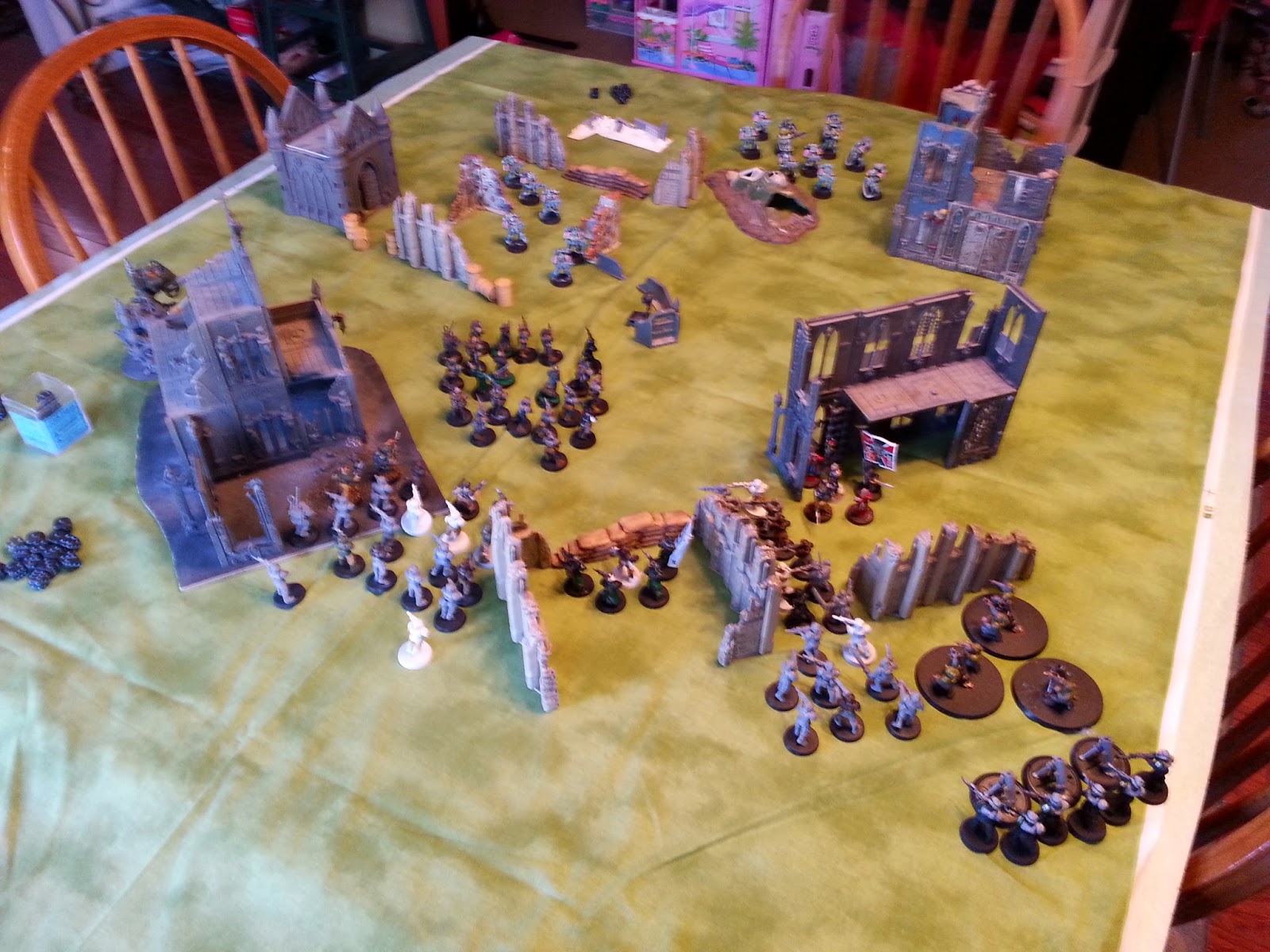 The conscripts take the lead, blasting a few las-rounds into the Thousand Sons who barely take any notice at all. The Chosen opt to weed out the conscripts a bit, and scythe down a handful with long range bolter and heavy bolter fire. 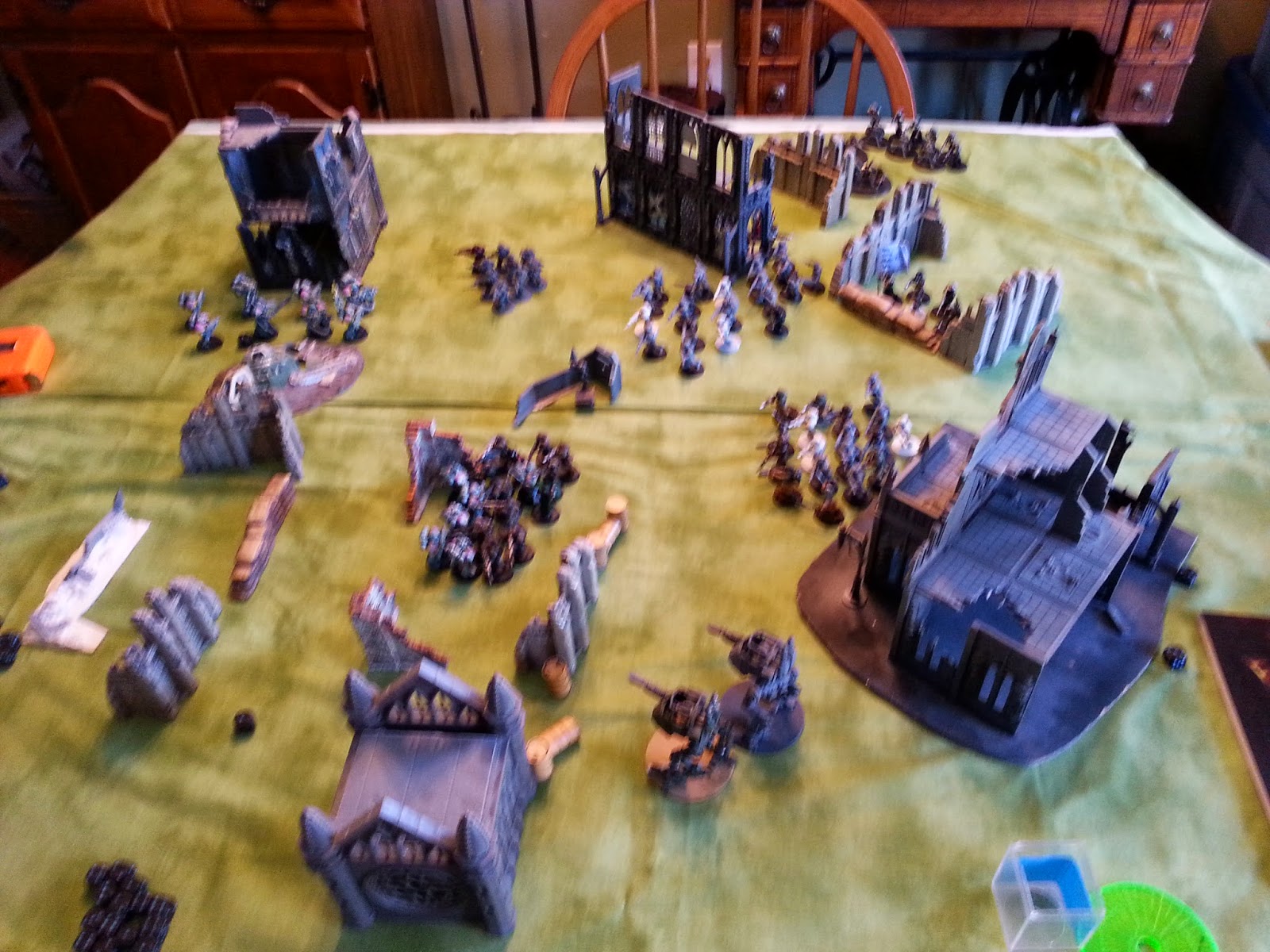 The Conscripts charge past the relic and into the thousand sons, and against all odds hold their own, The Tempestus Scion's team arrive just in time to halt Talis and the Chosen as they advance  on the right. The Hellguns do their job in a flurry of 5's and 6's.  the Chosen are reduced to bloody ribbons and smoking exit wounds. Talis sustains a wound. 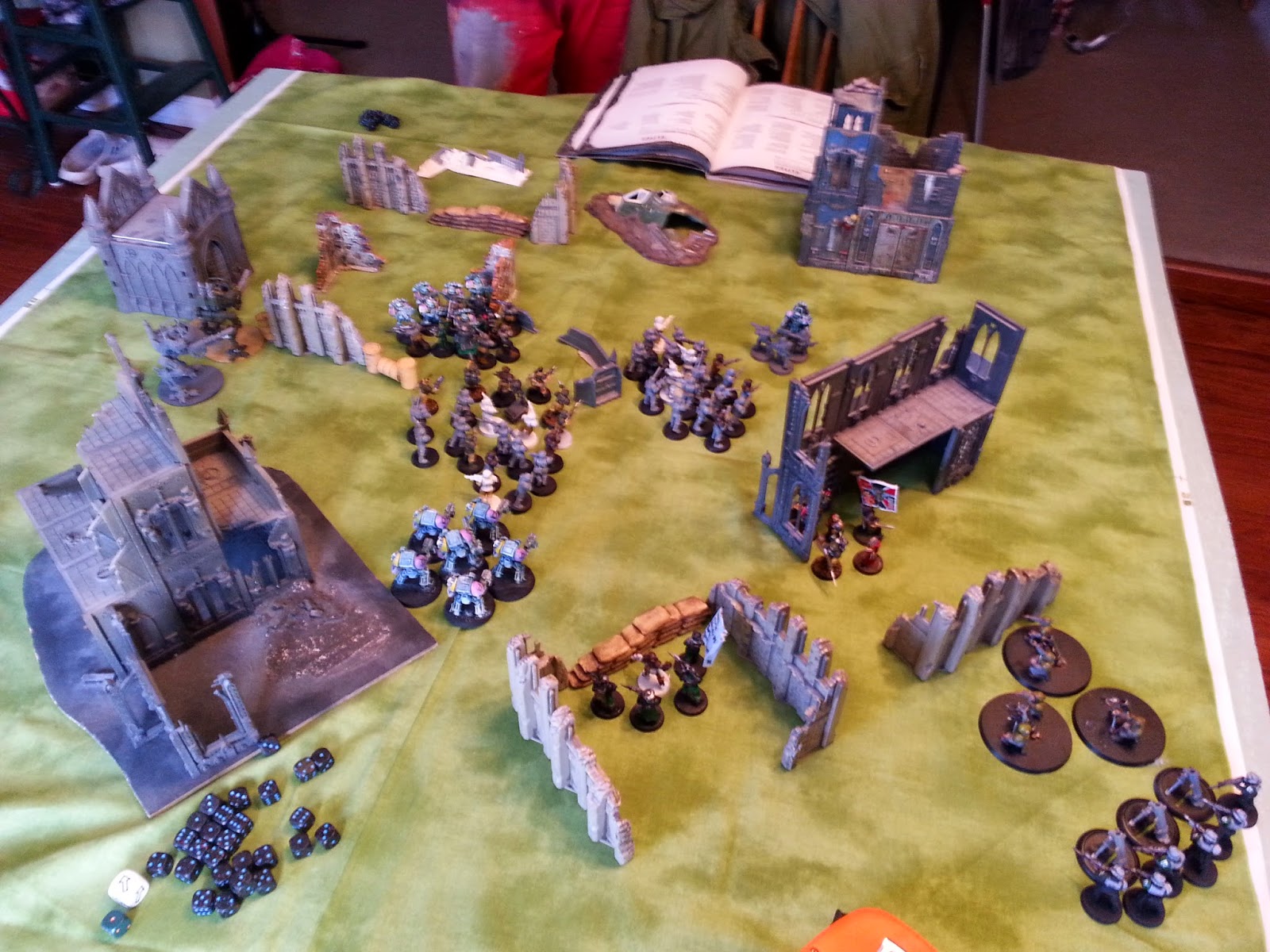 The Conscripts are suffering horribly, but don't break, and in fact deal casualties of their own to the Thousand Sons. Talis charges the Scions and uses his force weapon and Bolt of Change to make short work of the Special Forces unit, their screams still echo faintly around the facilities halls. 1st and 2nd Squads form up around the objective to pull the relic out. The sentinels try to move into the alley, but the lead sentinel gets immobilized on some sludge barrels and the leg workings seize up.  The Terminators appear just in time to box my infantry in (it wasn't planned, but it definitely had that feeling!) 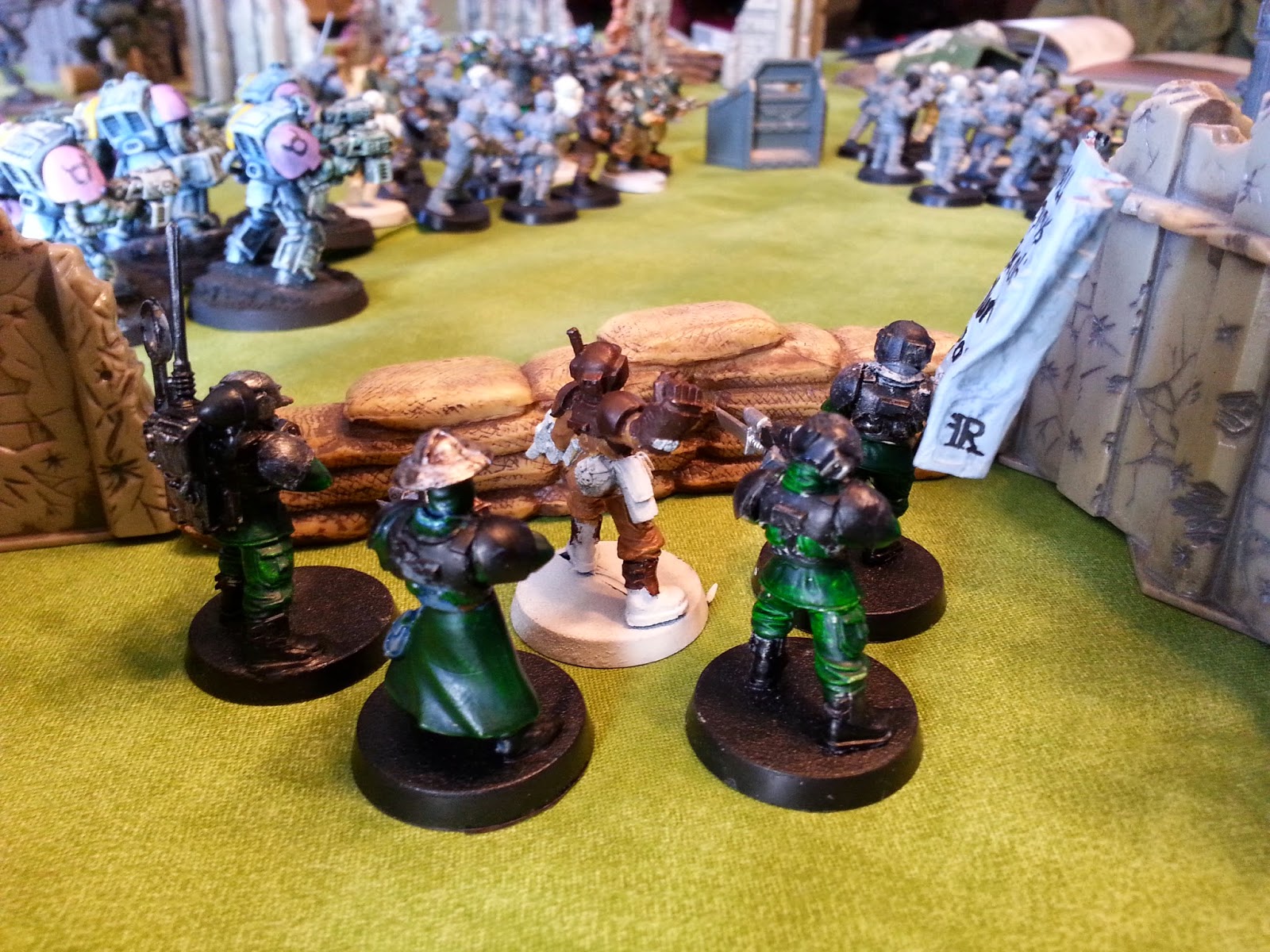 A view from Alpha Platoon's command dugout at the giant melee. Just before the command teams charge out to try and stop the marine heavy hitters from assaulting the squad with the relic. 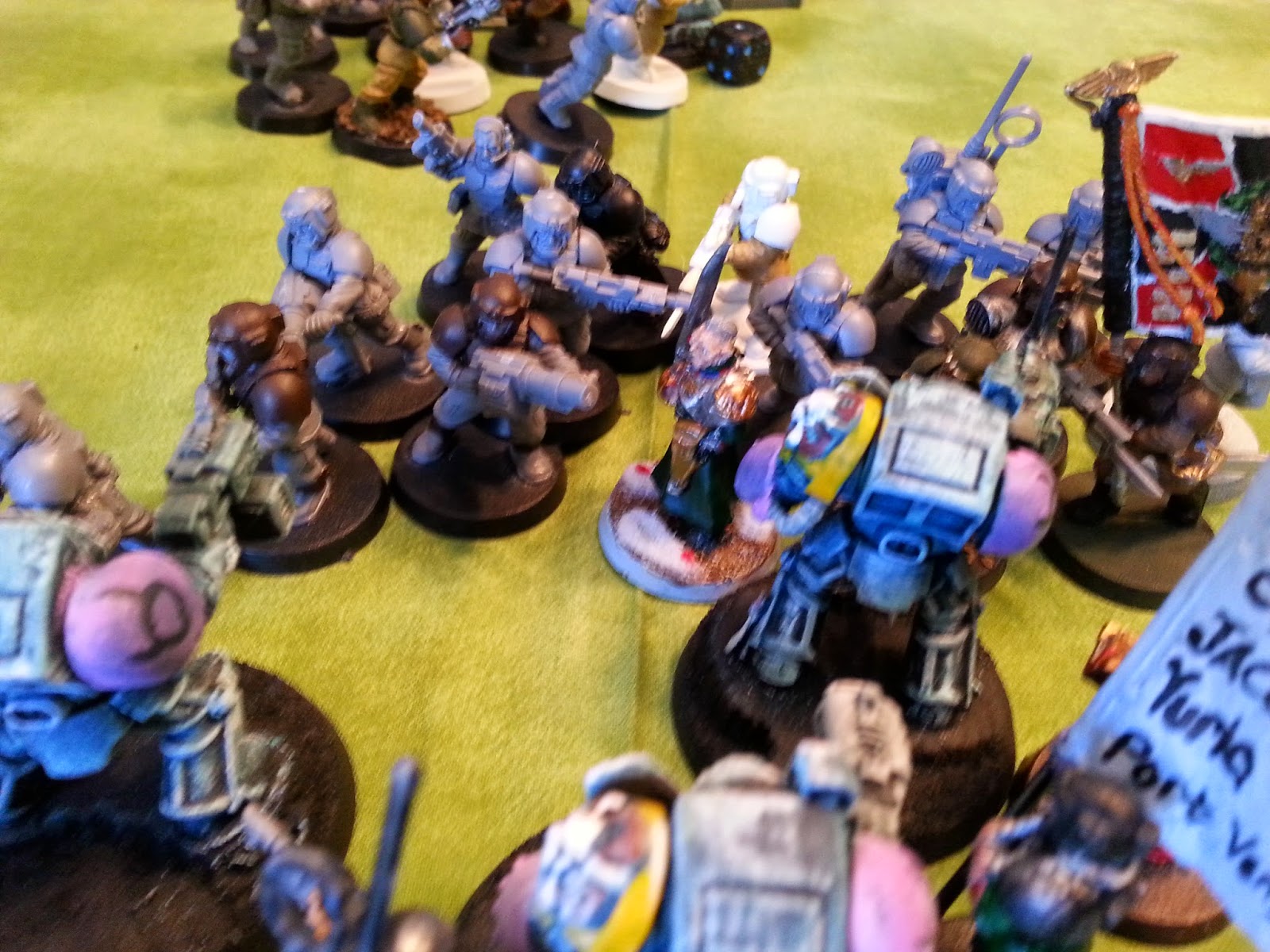 1st squad, the platoon command, and the company command assault the terminators where Captain Sallamis fells two terminators (three cheers for snake eyes),  the commissar and two surviving conscripts keep fighting the thousand sons, bravely holding the line to try and let 2nd squad escape and win the game.  But the last Scion collapses in a pool of blood soaked mud, and Talis sprints forward into 2nd Squad, forcing them to drop the relic and defend themselves. 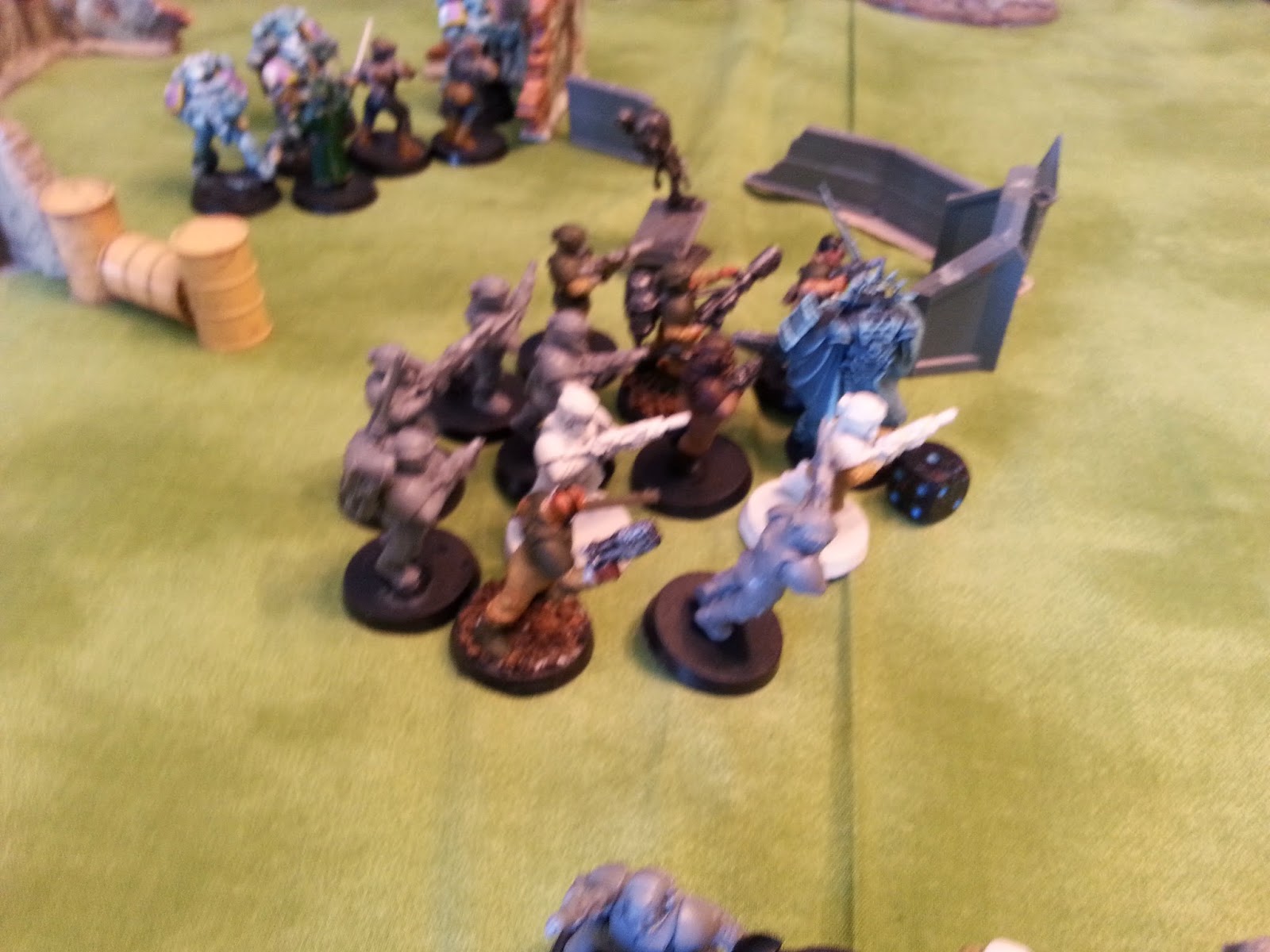 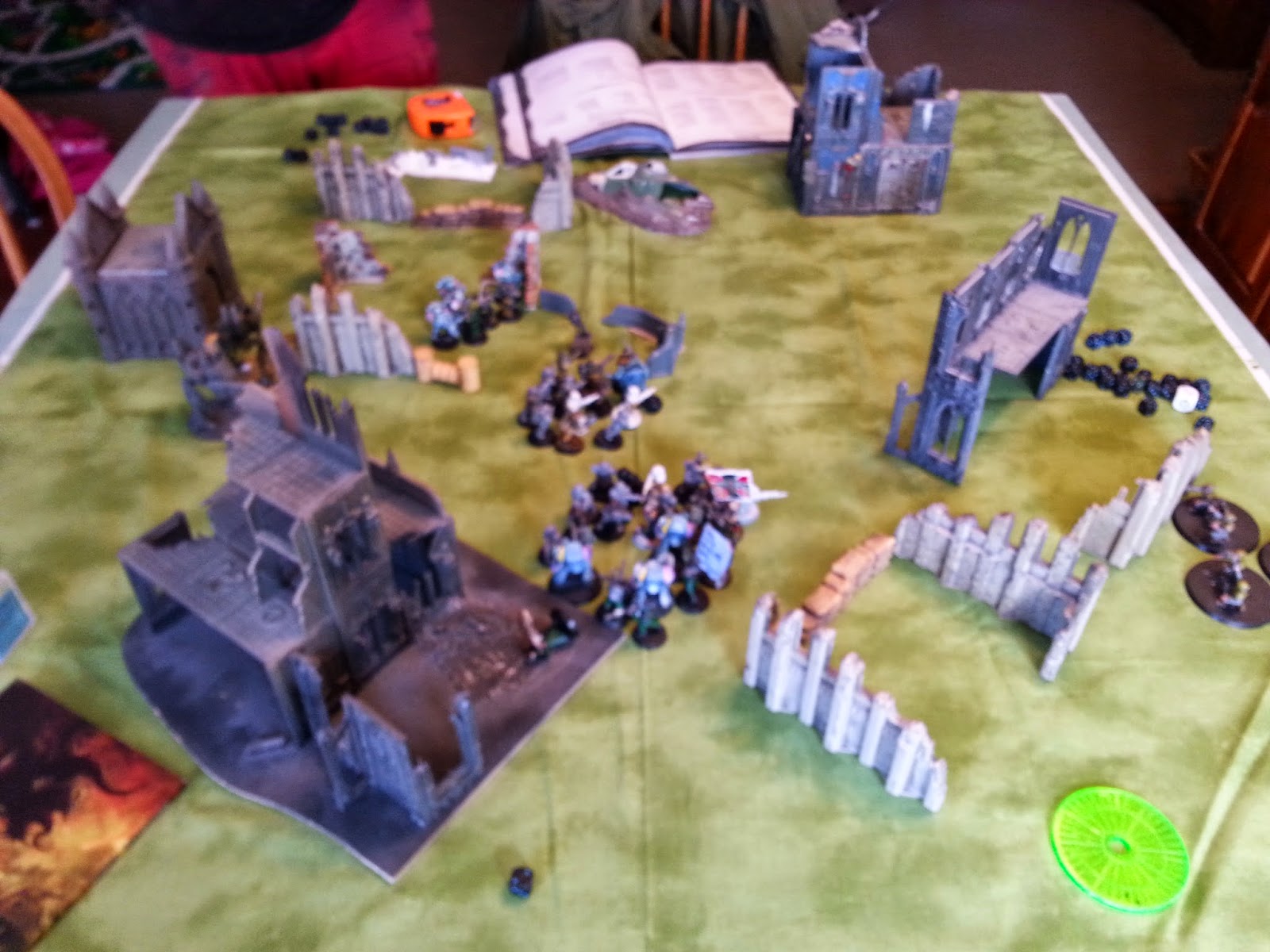 Librarian Talis- without the sorcerer, its likely that the marines would have been unable to firmly punch through to the relic,  he also accounted for the marine kill point and just general excelled at being a 'hero' character,  he was awarded with a dump trucks worth of experience,  and a stylish new paint job (picture in the next battle.)

The Conscripts of Alpha Platoon.- The militia of this squad, personify the reason I love the Imperial Guard. despite being normal humans, even more so than their guardsmen counterparts. They fought against expensive heavy infantry, the entire game, not breaking through their determination and obscenely lucky amount of wounds.  Despite locking down the Thousand Sons for four whole turns, and nearly securing victory as a result. the experience chart (were I awarding this list exp) would have been a -20. These guys exemplify the grim futility of life in the Guard!

This was JD's (Scroll Seekers) first 40k game, and it was definitely entertaining. I mentioned above that we are using the exp/ battle honors section from the 4th edition rule book. Since this is the first battle in the 'campaign' no battle honors were awarded.  I will also, be playing Orks which i'm currently working on building up, so that i'm not at quite so much of a materials/familiarity advantage over JD in future games, therefore I didn't award the Kingscrest any exp.

If you've got any questions about this weird hodge-podge of books I call 'house rules' now.  or random commentary feel free!