The Siege of Lychke. Pre Campaign.

A mini campaign myself and JD, played in the Angelshearth Front of our 15mm Gen Sci Fi setting, towards the beginning of August. 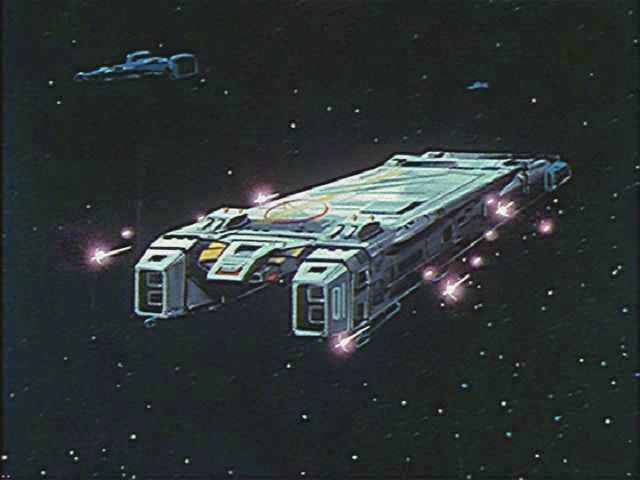 “Sir, picking up a blip on the lower left bow. Coming round Orbital pre point V-102.”

“Probably the damn commie Volocheks again. Cycle the laser reflective mirrors, and arm the railguns, get Gomez up here, we need everyone on deck.”

“Sir, the ship doesn’t match the Volo’s.  Computer bounceback is absurdly sophisticated,  i think its corporate…”

“Oh fuck… Get this goddamn bridge sealed, full alert, summon the rest of the fleet to our location. I want full reverse thrust towards pre poin….

“ Sir, computer is reading power draws on their ship.”

“Bring up my mirrors!  NOW!

A searing bolt of light ripped into the bridge of the CNI Ardent Stallion at 0600 Hours, as it was on monitor duty above one of the provincial capitals of Angelshearth,  called Lychke [Lie-Ch-K].  The Attacking force, has been identified as a vessel belonging to the LWEC corporations’ military arm, SecMass. The CNI Ardent Stallion, withdrew under 25% power, to a fleet staging area. The Reserve ships, the CNI Winged Pride ,  CNI Brutal Jackboot, and CNI-APF Celestial Fear, move at full power, to the SecMass vessels last known location.

The Battle for Quadrant Crown.

The Reserve ships found the vessel in low orbit in a spatial quadrant of atmosphere called the “crown” as it sat in a sweet spot in Lychke’s Orbital Defense Guns, the ensuing battle was enough to dissuade the SecMass ship from continuing to launch landing craft.  but it left the CNI Brutal Jackboot critically damaged,  The SecMass ship, now, popularly being called the Gray Reaper, by the superstitious Naval Initiative men.  Distanced itself from the planet, and flotilla’s of Conclave Naval Initiative and Provisional Fleet ships formed a skirmish line to ensure that they stayed there. 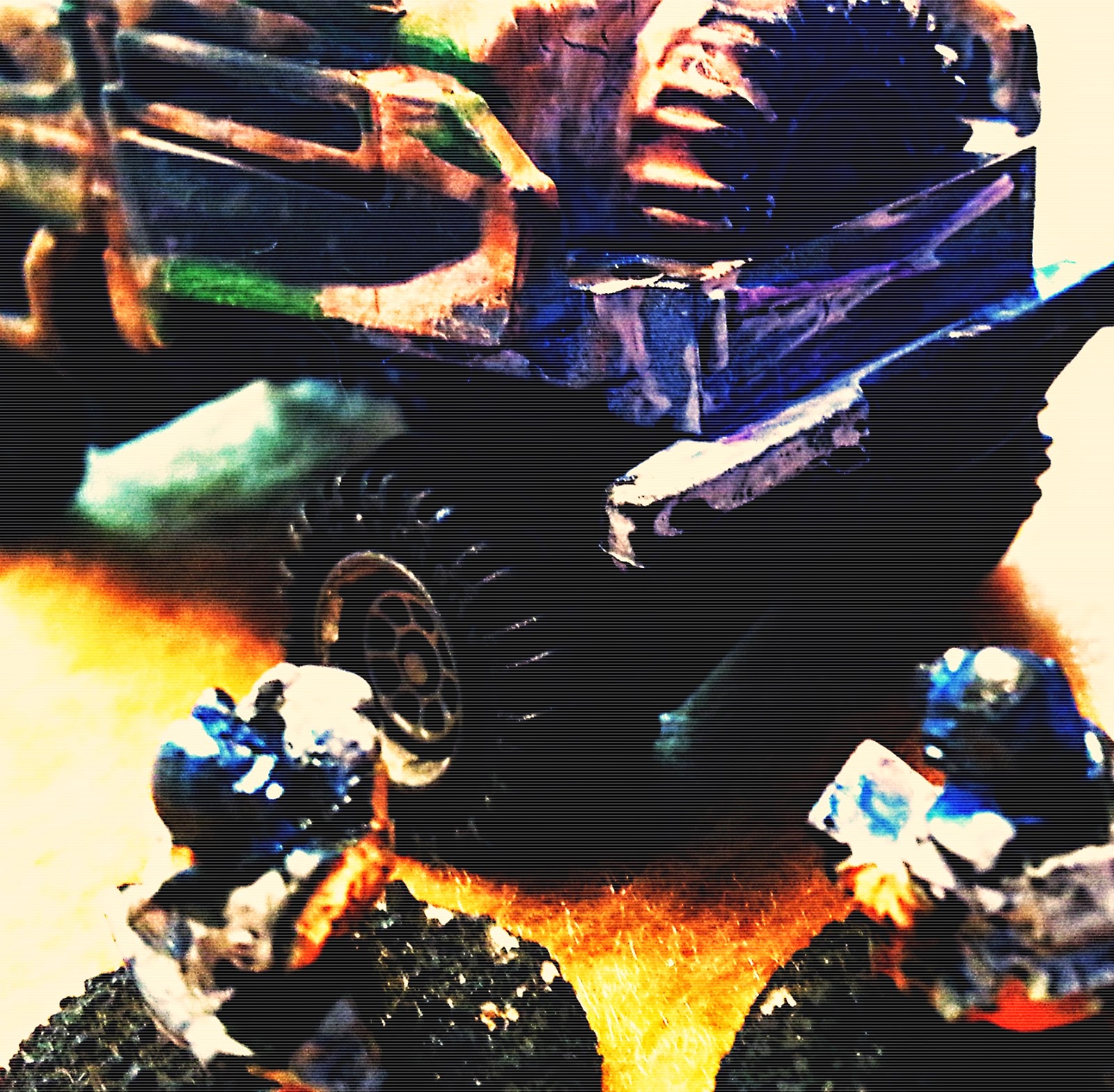 The Ground Threat to Lychke

SecMass units had landed, not in the quantity they might have liked, but certainly enough to wrestle control of the capitals defensive lasers and railguns for long enough to allow for more of their forces to land.  The SecMass units are moving quickly and rapidly to the cities outskirts, with the intent of overwhealming the CMI [Conclave Militant Initiative] and APA [Angelshearth Provisional Army] units holding the city.

The Cities defenders,  the 5th CMI Mechanized Brigade, 10th CMI Guard Scouts Brigade,  and 3rd Provisional Infantry Regiment, make up the modest “Army Lychke”  which has fallen under the command of Magos Ruiz Polochenkov, from the 2nd Army Group’s general staff.  He is a tough dependable front commander with a history of actions during the war for Sellas.

In the morning the Conclave troops, and APA would begin a fight against indoctrinated and tough corporate soldiers, all across the sector, the mettle of raw conscripted troops and their officers would be seen.  Would they be found wanting?

Colonel. Merda,  known also as "Rust's Bulldog."  Is a older man,  of 52 years,  and one of Antilo Rust's most tenacious, and senior of Army Group Commanders. He is vicious, known for lightning quick armored offensives and the liberal application of Mechanized Infantry assets. 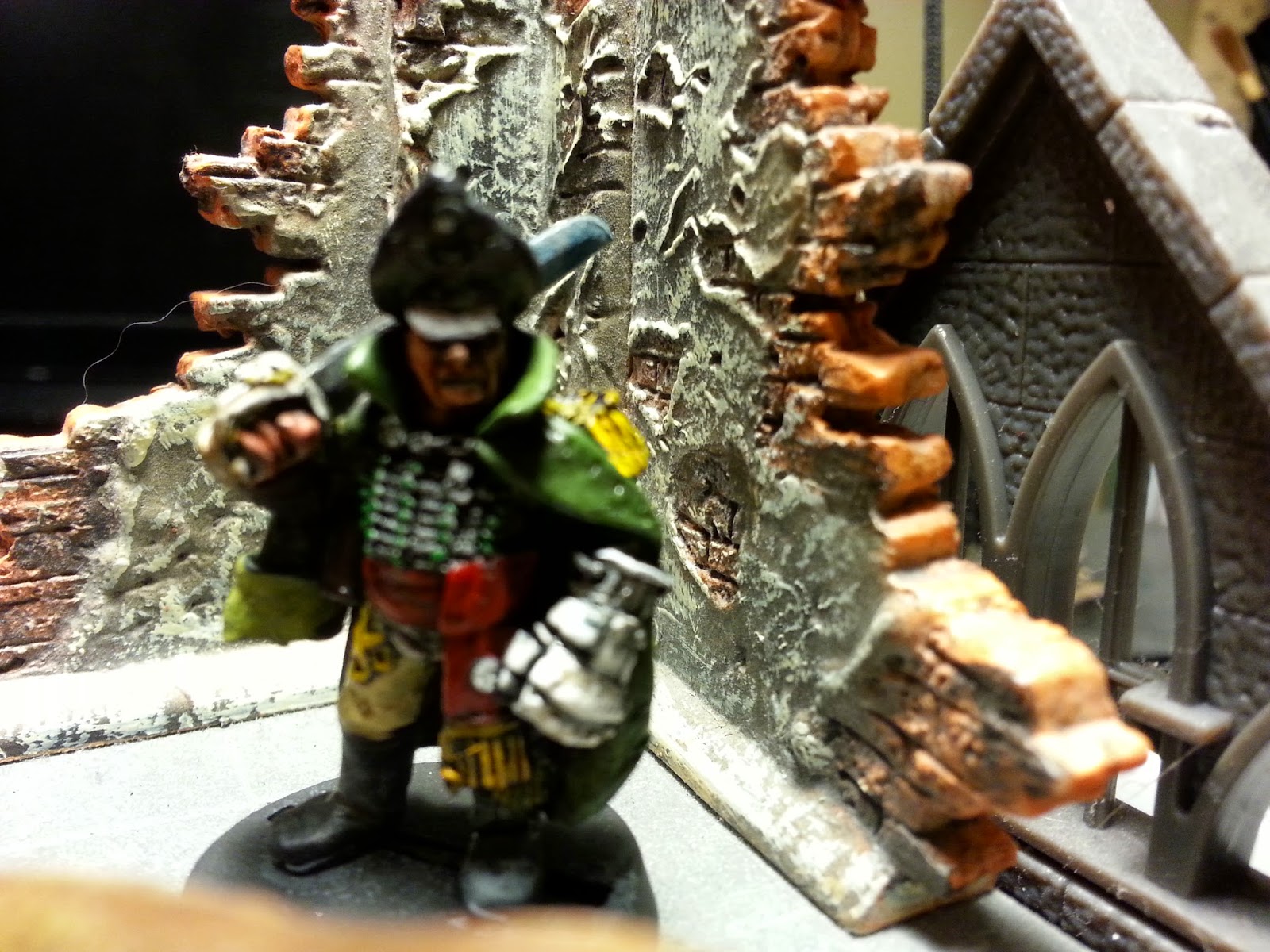 As a young man, Uriah Merda was a fiercely independent member of "The Brass Hegemony" a volatile economic sect of the Imperial Government on the Hive World of Cauldron's Gate. There he was responsible for overseeing the discipline and punishment of illegal mutant slave laborers, that provided much of the workforce for the Hegemony's obscenely high product quota. Cauldron's Gate, was eventually shifted into the zone of reinforcement for the Astra Militarium war against Orc Pirates in the sub sector.  Merda's, natural talents as a disciplinarian proved very helpful for his career, and he was placed in the 4th Cauldron Infantry's regimental command staff as an adjunct Commissar.

In his tenure with the 4th, he learned the trade of the political officer, and soon relished the work, putting the fire of battle and will to succeed into the hearts of the infantrymen under his direction.  After nearly a decade in service with his home regiment. Merda was given the rare promotion to the rank of full Commissar, by his mentor, and was to be transferred to a special Schola in the Segmentum Solar for indoctrination of the just right of Imperial Law.   However, as is sometimes the case with the Departmento Munitorum, he was prematurely transferred to the 3rd Yurien Regiment as a Senior Political Officer, to assist with the Cyrian Civil War. 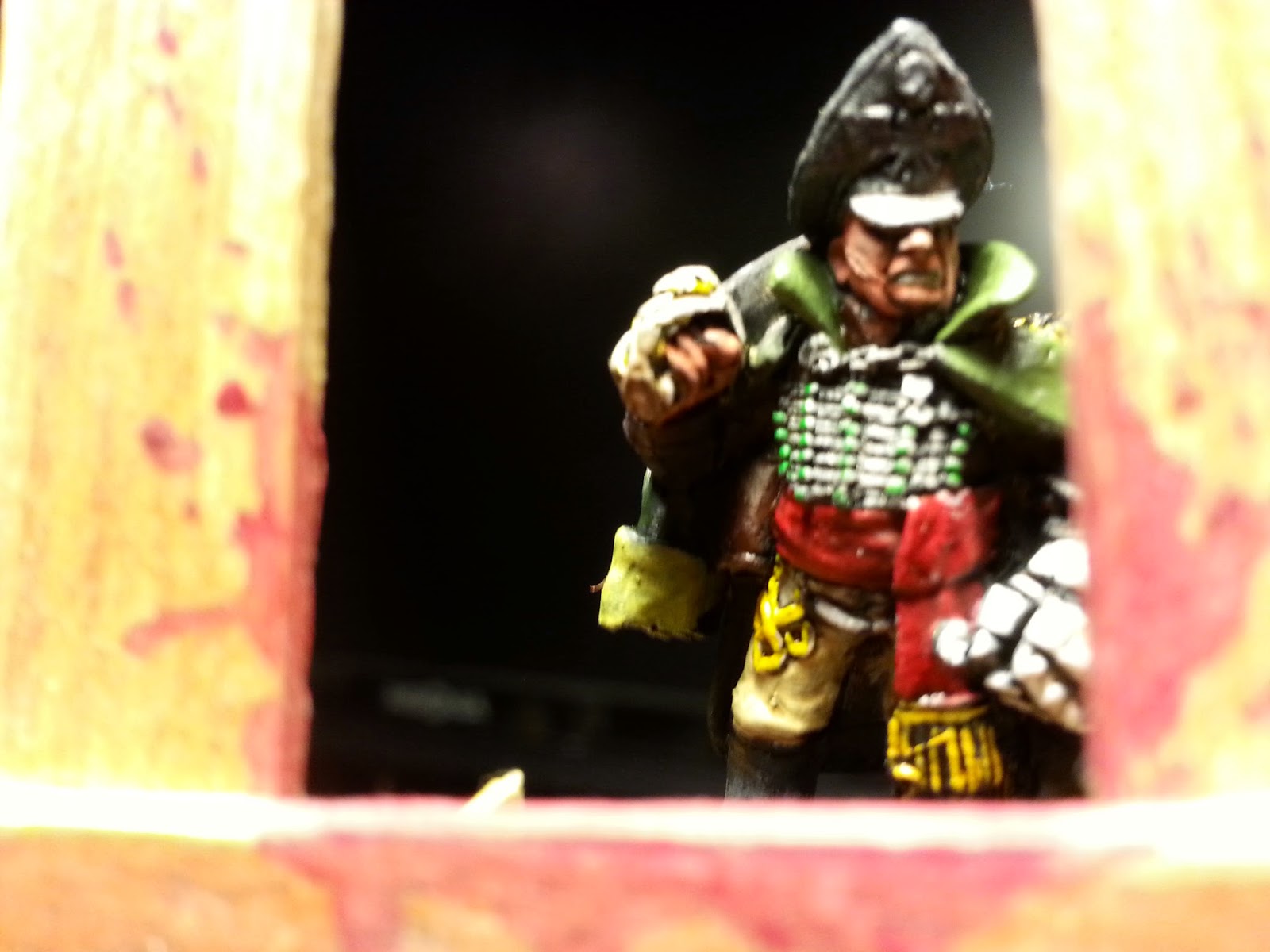 Upon making planetfall on the dusty flats on Yuria. Merda, assisted for sometime in small scale anti guerrilla operations, becoming familiar with the mechanized blitz tactics of the tankers.  Eventually, late in the war, only a few months before the Pilgrims would arrive and liberate the world.   The Governor issued  Edict 001,  to all loyalist regiments,   the systematic annihilation of all resistance units, their families, their families relations, and those relations' relations.   When the 3rd heard of this, their fury and outrage was absolute, armed terrorists was one thing, but few had been prepared to enact a full purge. Loyalties were tested, and it looked like even the PDF would rip itself apart.  Merda, spent much of this time brooding, thinking about his true place.  He decided, that the only proper thing to maintain discipline in the regiment would be to execute the acting Colonel Tamhander,  and place the regiment in a state of total neutrality until the wars end.

The 3rd, would be encountered at the central Tram station, holding off the 2nd Yurien "Loyalists" by the 11th Rallen. The stress, and lapse of imperial law, had let the temptations of Chaos slip in, and the 3rd were just starting to build bloody alters to Al'shata Kharone (The Blessed War Father).  Merda acting as their defiant new Colonel.

Soon, Merda, would be promoted to the rank of Lex Commandat in the Pilgrims,  and be in command of the entire 2nd Army Group, some 1.8 Million Souls.  but for all the titles of distinction, he chooses to be called Colonel and thinks it more "homely" and "down to earth".   While he spends a lot more time in command rooms, and briefings than he would like, Merda still finds plenty of excuses to extol great feats of courage, and fight alongside his "Tough Bloody Boys" . 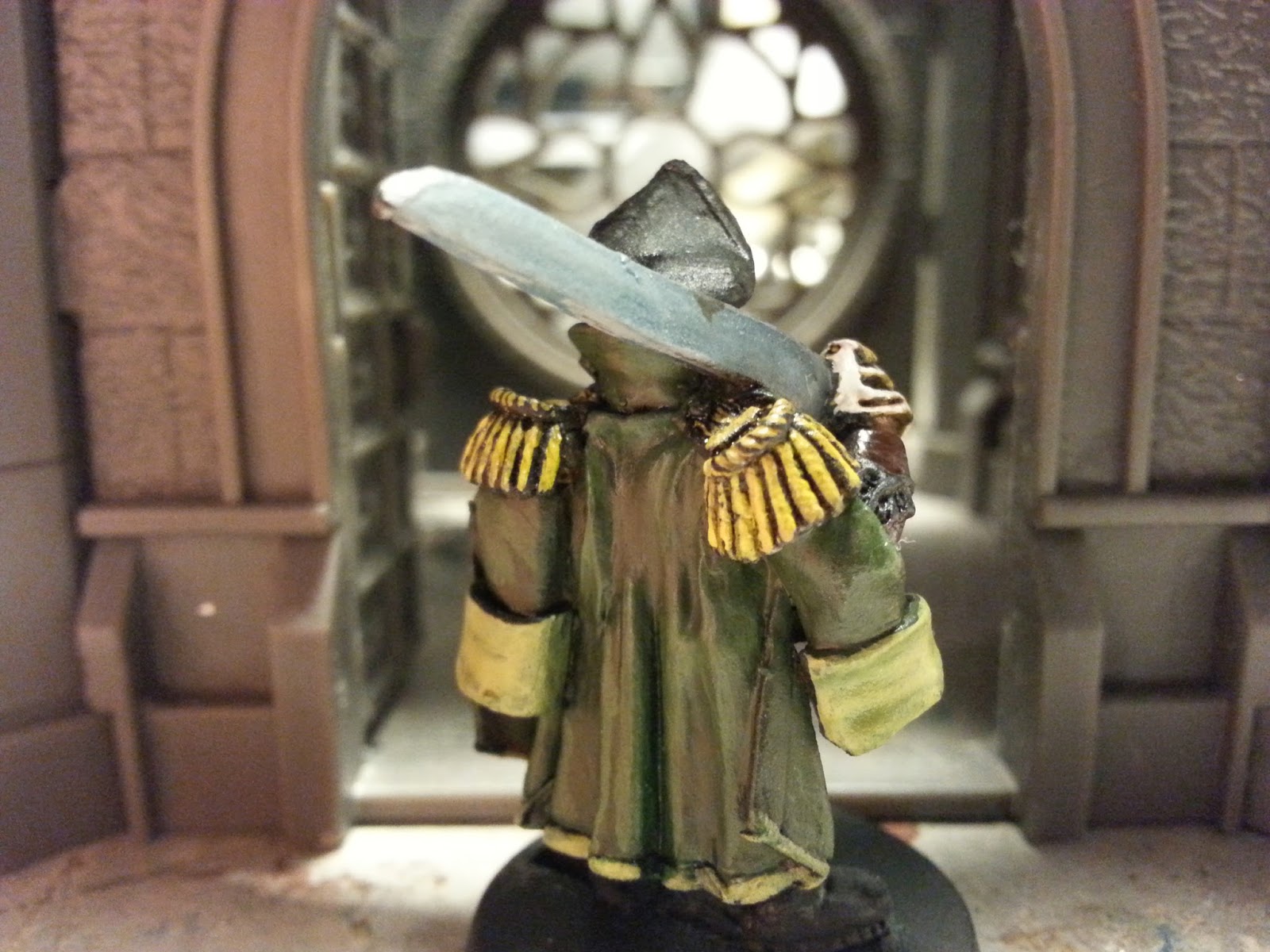 Posted by Impcommander at 8:31 PM 4 comments: