This is the third in a series of narrative battle reports following the actions of the Sons of Medusa as they hunt down the Ork Warboss/Mek known as Oilymaw. for the first story click HERE and for the second click HERE

Corporis wiped the blood out of his eyes that was flowing out of the recent cut on his face, his helmet lost in the marshy streets of the Ork scrap cities. He took a deep breath of the chill coastal air, it smelled of salt and gunpowder. The rest of the strike force was beginning to rally around him now, save for a handful that had stayed behind to aid the Mechanicus's exfiltration from the target area, the distant sound of which still drifted across the city.

They had used the Skitarii as a diversion, drawing more of the Ork population away from them while they gave chase after Oilymaw and his bodyguard. The scrap city proved to be extremely hostile even with this distraction, however as throngs of scattered Orks rallied to Nobz and warriors sporting particularly extravagant firearms appeared to harray them. The fact that they were Astartes seemed to compound the issue, the aliens love a hard fight and the reputation of the Space Marines was such amongst these creatures that many eagerly threw themselves into battle.

Many brothers were wounded in both the initial attack on the observatory, and in the chase to cut the target off from escape. But failure now would only build Oilymaw's reputation to insane heights...he must die.


Looking up, Corporis could see the hundreds of bounding greenskin soldiers a few blocks away.

"Brother-Captain. I have arrived." boomed the voice of Ancient Castellax over the vox network. The mighty pounding feet of the venerable war-walker could be heard coming down the craggy defilade on the other side of the clearing, the other members of the reserve teams fanning out before it to meet the onrushing aliens. 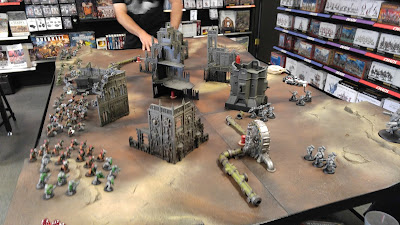 Brother Tullus pulled back the control stick, banking his Thunderhawk Gunship steeply to the right, to avoid a trio of Ork dumb-fire rockets. He turned to see that the last Stormtalon had finished offloading the remainder of the strike force's reserve teams. As the craft ascended into a high orbit of the operations area, Tullus toggled the strike force vox net. "All teams are landed Brother-Captain.  Aliens are within 400 and closing to your location." 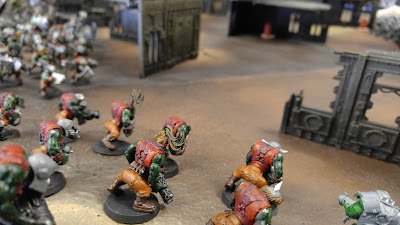 Corporis acknowledged the reports and immediately set about giving his final adjustments to the defense. "Pugno and Aerea neutralize the flanks of the retinue. Rubro you and your Hellblasters must find good choke points in the buildings. If you see the target, obliterate it with overwhelming fire. 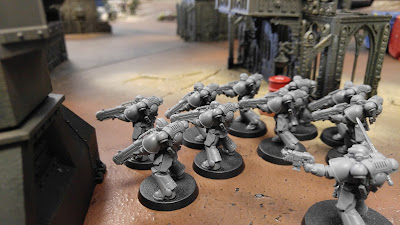 Rubro cautiously moved through the facility. a crisscross of broken hallways, pipework and a latticed canopy of electrical wiring lit in an array of vibrant hues by the sunset and iridescent blue glow of his squad's plasma guns. The cracks of the flanking squads' fire echoed at odd angles through the shattered complex.  But under the noise, Rubro could hear something else. 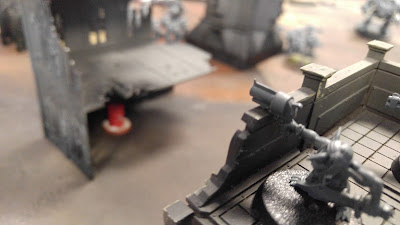 In the stories above his squad, he saw just the faintest amount of movement.
"GRETCHIN!" he voxed to his squad.
Moments later accurate fire rained down from the pipes, ducts. Sparks and pieces of shrapnel exploded off the armor of the Hellblasters. The squads return fire, however, was exponentially more violent. A dozen bolts of star gas seared through the pipework into the gretchin's firing positions.  molten plastcrete dripped down from on high and the room fell back to quiet once more 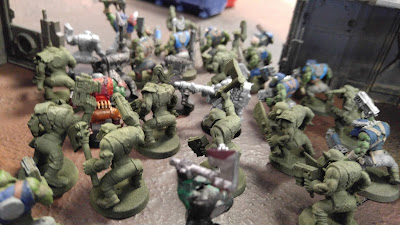 Rubro lowered his plasma pistol and looked around to check the safety of his squad. The haze of gunsmoke and steam was only barely clearing, but through it, all of his brothers still stood. slowly becoming more at ease after the sudden assault. Outside the intensity of the firing picked up.

Suddenly the blast door along the opposite side of the building was smashed open, flooding the smoke-filled interior with a wash of sound and light. Nearly three dozen Ork warriors poured through the new opening.  They didn't immediately see Rubro and his squad through the dim light and heavy smoke, but the Astartes could see them plainly. Almost half the beasts were incinerated with ultra hot plasma in seconds, many of the remainders fled back outside. Leaving only a handful of others, brutish massive creatures silhouetted in the dying light, their glowering yellow eyes piercing in the darkness.

The tallest bellowed a horrendous guttural scream and came thundering toward Rubro. "Focus your fire!" he commanded.  The warboss was engulfed in plasma fire, igniting its body in a stupendous conflagration as its legs and lower torso liquified into a bloody puddle under it. The battlecry turned to one of unbearable agony, before falling silent. 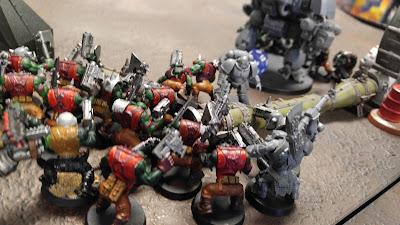 Pugno was knocked back by the sheer weight of bodies rushing over the pipeline. He emptied his magazine into the broad front of the greenskins and pulled out a combat blade, parrying a blow from one Ork with the armor of his right wrist, and ramming the knife into the beast's throat. Ancient Castellax, turned his servo's protesting loudly due to the damage they had sustained in the fighting. The vox on his front barking to life.

A hail of bolter rounds roared out of the Onslaught cannons affixed to the Dreadnaughts blessed hull. The fire scythed down the alien's latest charge. But still more milled around on the outskirts of buildings, gathering their courage before they attempted another try. Pugno quickly gathered himself to his feet and looked around to his brothers. Many in the squad were severely injured, Pumark, however, laid motionless beneath a duo of greenskins.  His suit's vitals still reading faintly on the squad leader's telemetry.  Pugno ran over to his fallen brother, pulling him out from under the dead aliens.  A muffled grunt came through Pumark's vox grill,  he started to ask the marine if he could still stand when he was interrupted by the strike force vox bursting to life.

"Understood. All Squads withdraw. Thunderhawks will provide cover for the breakaway."

Pugno and Aueternus, lifted the stricken Pumark into the back of the Thunderhawk as a hailstorm of boltfire poured into the buildings behind them. Orks were still milling around the area, but they had done what they'd come for.

As the gunship lifted into the air the strike force vox opened once more.

"Brothers, you have all done well this day. But I must ask more of you. The force's defending the Fortress Behras are calling for priority reinforcement. No other assets may be brought to bear, therefore it falls to us to stymie the green tide."

Pugno looked around at his squad, their armor was pockmarked with the craters from hundreds of munitions impacts, the luminous green of their heraldry smeared almost black with Ork blood, ash, and mud.  He said a silent prayer to the Emperor, and set the squad looking for any ammunition that might still be stored in the gunships hold. 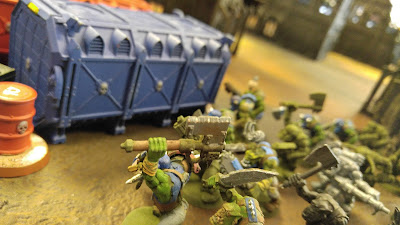 Oilymaw laid in the darkness of the ruined factory. Looking skyward into the nest of pipes and cables, his entire being was pain. A particularly unfortunate side effect of his species immense constitution was that it took many minutes to die from blood loss.  Groggily he attempted to look around the room, to move his arms or legs. but was unable.

He heard a distant rattle, but couldn't concentrate his thoughts enough to understand what was making it or from where it came. His own bull-headed struggle to do so rocketed his mind back into unconsciousness.

The gentle clicking of hundreds of bones heralded the arrival of the Weirdboy and his throng of snakebites. He breathed in deeply.

"Dis one is blessed by Gorkamorka. Hunted by da mega umies he has past frew da green. Into da black"

leaning hard on a staff made of Imperial chainswords, the shaman bent over the burnt form of Oilymaw. His flesh charred, his limbs annihilated into cauterized stumps. He softly began to chant. The words spreading across the rest of the nearby orks.

From beneath the bodies of the many slain Orks a green fog appeared, clinging low to the ground like a blanket of etheral snow. As the fog built in density so too did the feverish chanting of the gathered aliens, until it had reached a manic climax. The fog began to crackle and pop with arcing electricity. Gathering thick around the body of Oilymaw.

In a sharp sudden instant the chanting stopped, the lightning ended and the fog disappeared.

Oilymaw's eyes shot open, his chest heaved violently as life poured back into him.  Above him stood an Ork covered in furs and dozens of lanyards of fetishes and trinkets. Its eyes thickly outlined in tar and blood.

"Ur pick up da boss. Wez got to go see Da painboyz"

A massive greenskin beast moved over to Oilymaw with a grunt. and hoisted him out of the puddle of his own flesh, lashing him quickly to his chest with bits of electrical wiring from the nearby wall. Ur grunted the completion of his task, and the throng of Orks began on their way.
Posted by Impcommander at 9:01 AM 2 comments: