With the Nyssoak Confederation growing in strength and wealth by the hour, the Noblemen and Coastal Kings of the barren Jarra region, with the assistance of the dispossessed shamanic congress of the Lurtuk swear an oath of mutual military assistance, forming the Jarra Tribes as a nation state.

The Winds of the North again grow in Power, icy winds blow across the bleak forests and uncomfortable shadows contort at the horizons edge.

The Khuvtan fortify their borders,  the Nyssoak take cautious positions in their newly captured territory. 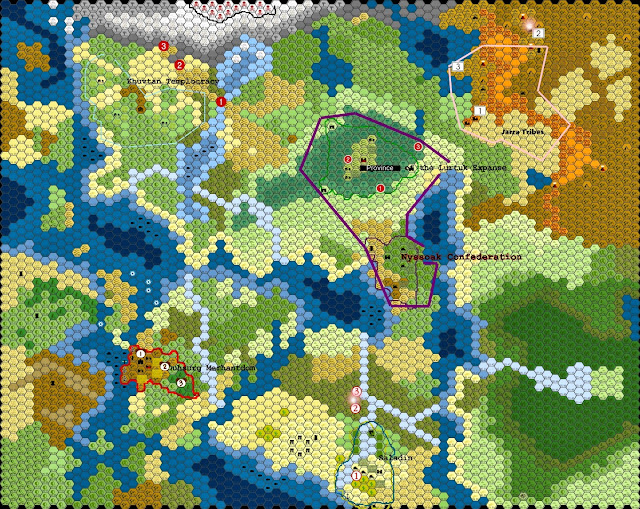 In the South, the Saladin march on the Hill Tribes (minor faction), and with their 2nd and 3rd Armies join the tribes in pitched battle. 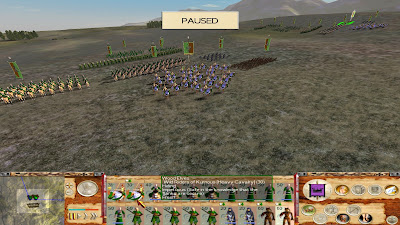 The Armies of the Saladin arrayed for battle 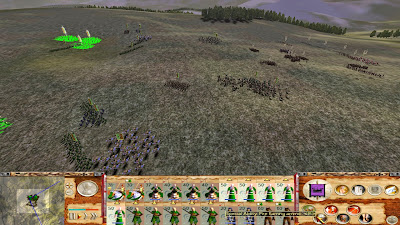 The missile cavalry of the Saladin armies, skirmish with the onrushing tribesmen. Saladin regiments reveal themselves from ambush and rain arrows onto the enemy 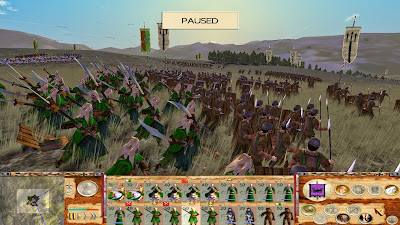 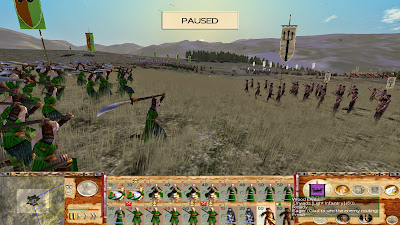 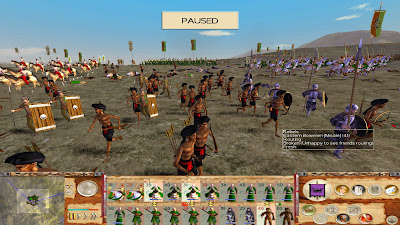 The Hill Tribe falters and begins to rout, Saladin cavalry chase down the enemy 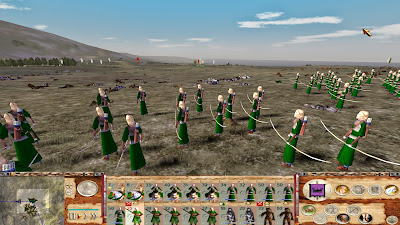 Saladin Archer view of the battlefield.

In the North, the Jarra Tribes, send their 2nd Army, North to put down another indigenous population, this time a population of brutal volcano worshippers called the Acktrag. 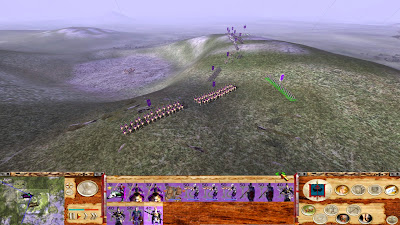 The Jarra, deploy in a fish hook on the top of a ridge to make the best of their ranged weapons 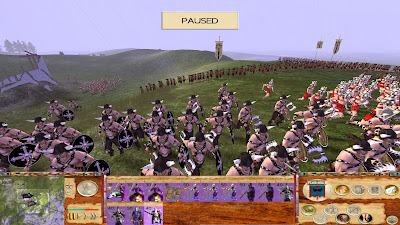 The Acktrag advance,  with flanking ranged cavalry hitting the Jarra on the left. and the main body avoiding the bottom of the ridge as best as possible. 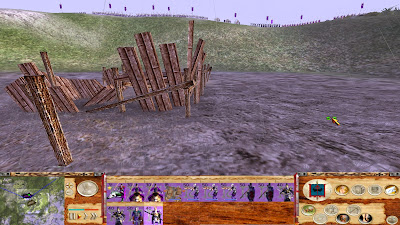 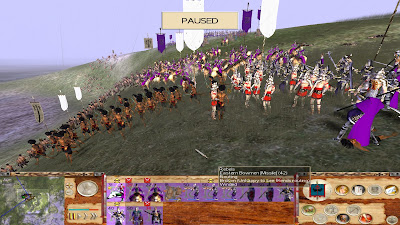 The Acktrag assault on the Jarra left is beaten back, though it is a close run thing 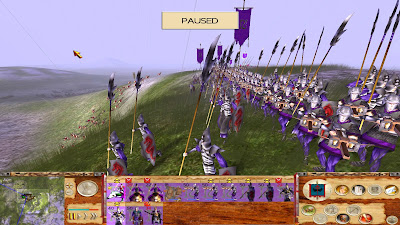 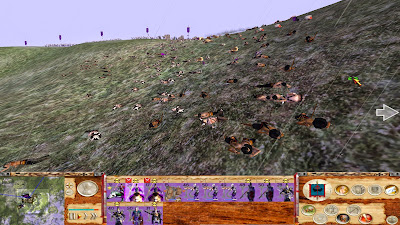 The way up to the Jarra left is littered with corpses 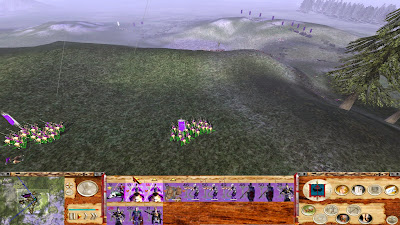 Through an unfortunate turn of events for the regrouping Acktrag in the valley below, cavalry and light infantry regiments chasing routing Acktrag missile cav, have surrounded them, The remaining Acktrag would be charged from three sides, only 3 tribesmen would make it from the battlefield alive 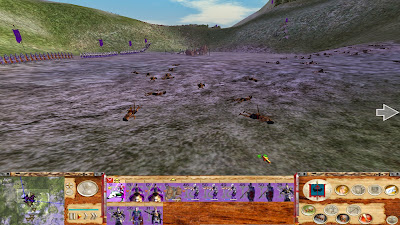 a view in the valley after the battles end 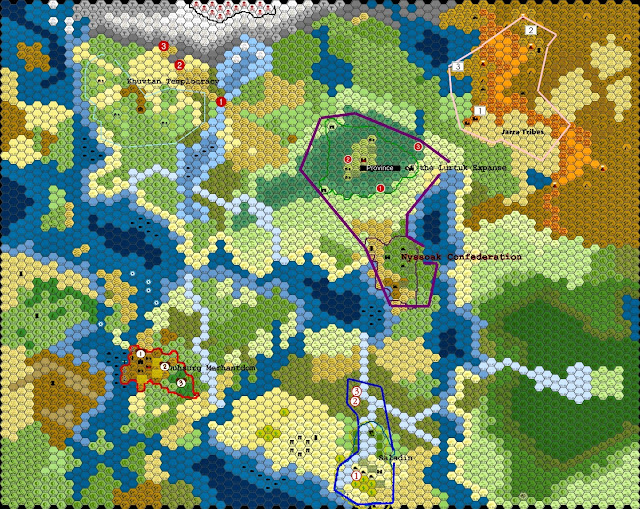 Posted by Impcommander at 8:31 PM No comments:

Myself and JD, both having downloaded and played the Warhammer Total War mod for the venerable Rome Total War (yes the first one) and enjoyed it thoroughly. However recently we were of the mind to utilize a mod to develop our own nations and map using a roleplaying game map maker called "Hexagrapher" which can be downloaded Here.

The Overall Rules for our campaign and the overall pricing of armies and how we go about the moving of NPC factions is facilitated in a .pdf file (living document) that can be downloaded via google drive Here 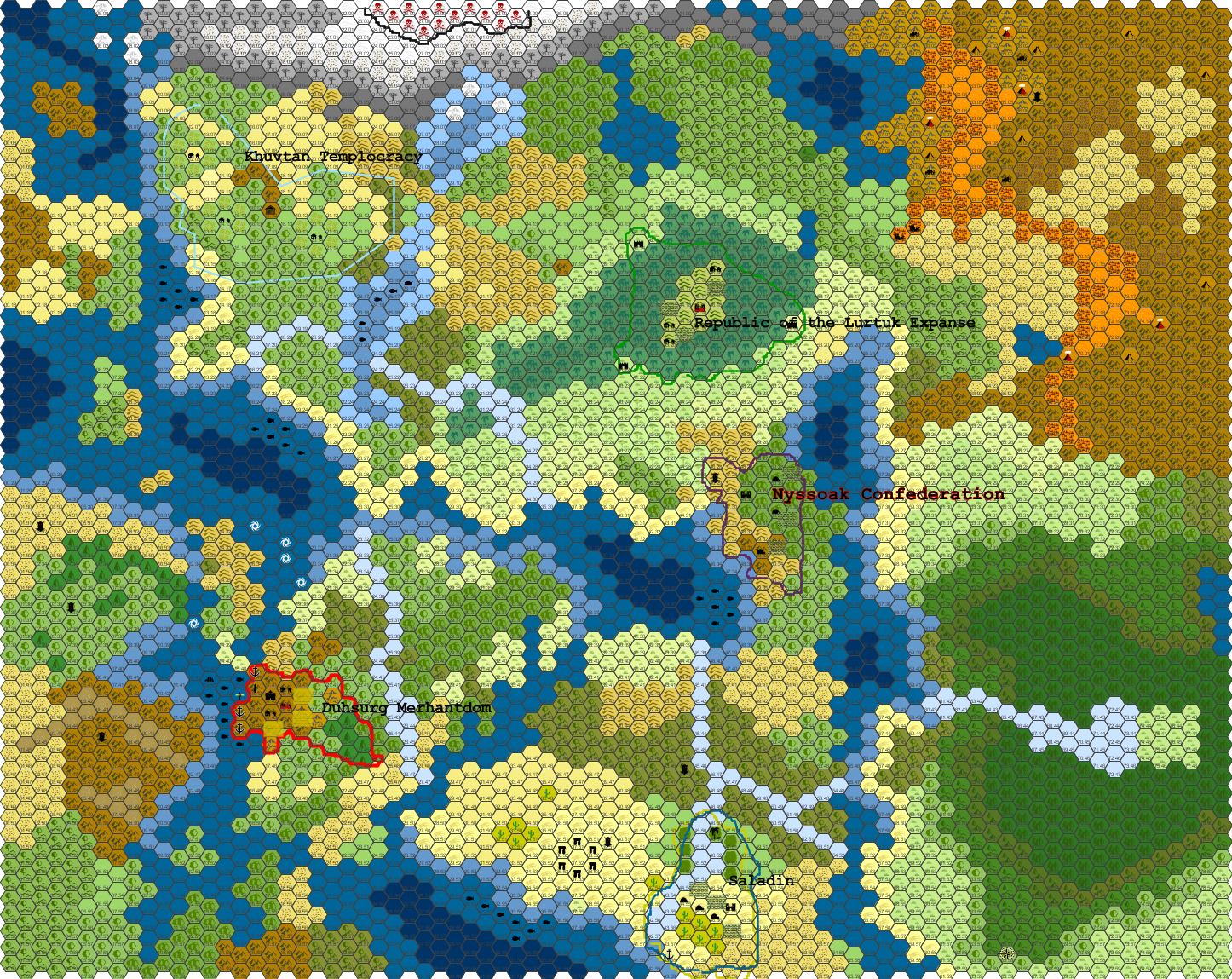 The Khuvtan Templocracy. is a religious oligarchy which lives in the snow bound landscape of the north, just at the border of the weird and twisted lands which harbor a mysterious force called 'the winds of the north', played by myself

The Republic of the Lurtuk Expanse, is a conglomerate of tribal bands living in a coniferous enchanted jungle, they are lead by a Congress of Arch Shaman, they are NPC's

The Nyssoak Confederation is a alliance of Elven Merchant Guilds living in the fertile ground between two mighty seas. they are NPC's

The Saladin are city-state, seeking to expand its influence and status to dizzying heights. Their city has a direct democracy, but the people that live in the outlying spaces under their control are little more than serfs. they are NPC's

The Duhsurg Merchantdom, focuses on economic domination and establishing a stranglehold on foreign trade through use of small private merchanthouse armies to monopolize the fisheries off their coast and in the nearby rivers. Played by JD.

Turn 1, saw some small movements in army positioning and the Nyssoak declare war on the Lurtuk Confederation.

The 3rd Splinter Host of the Nyssoak engage the Barechest Warriors of the Lurtuk Republic. and rout the army in a Heroic Victory. 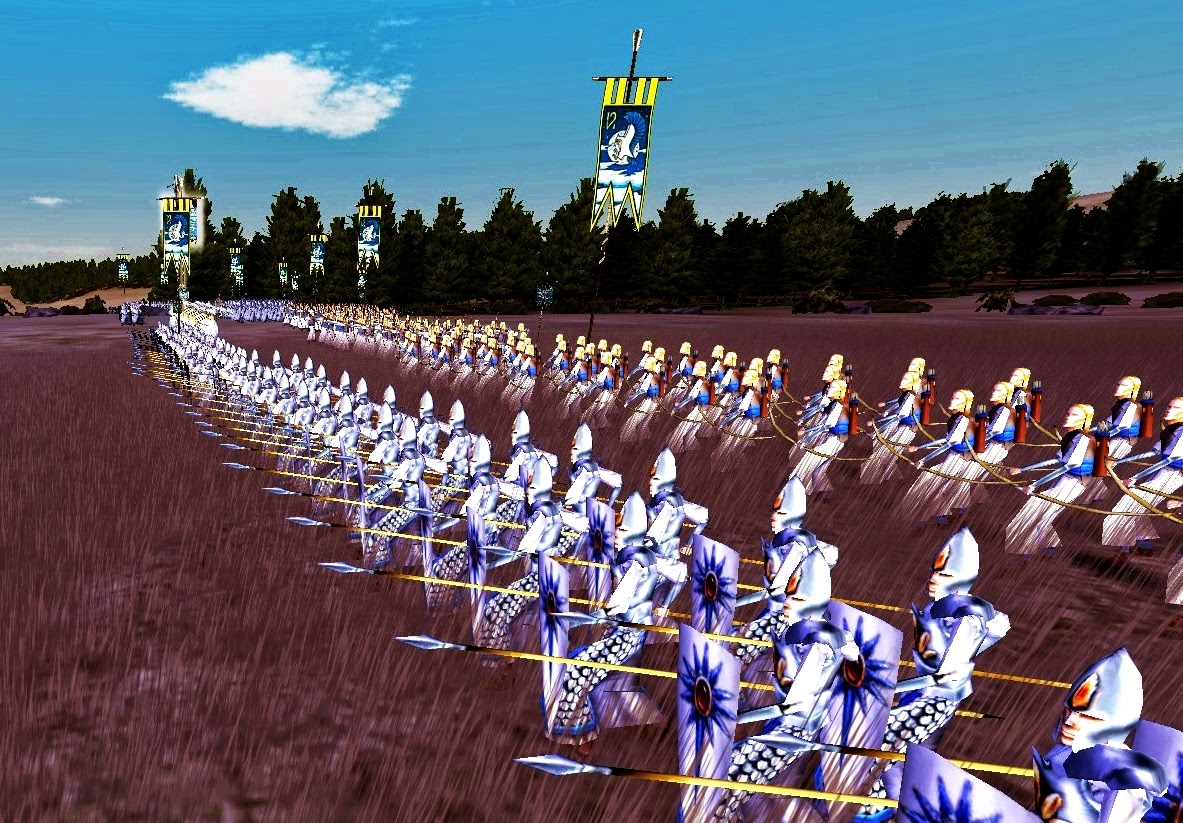 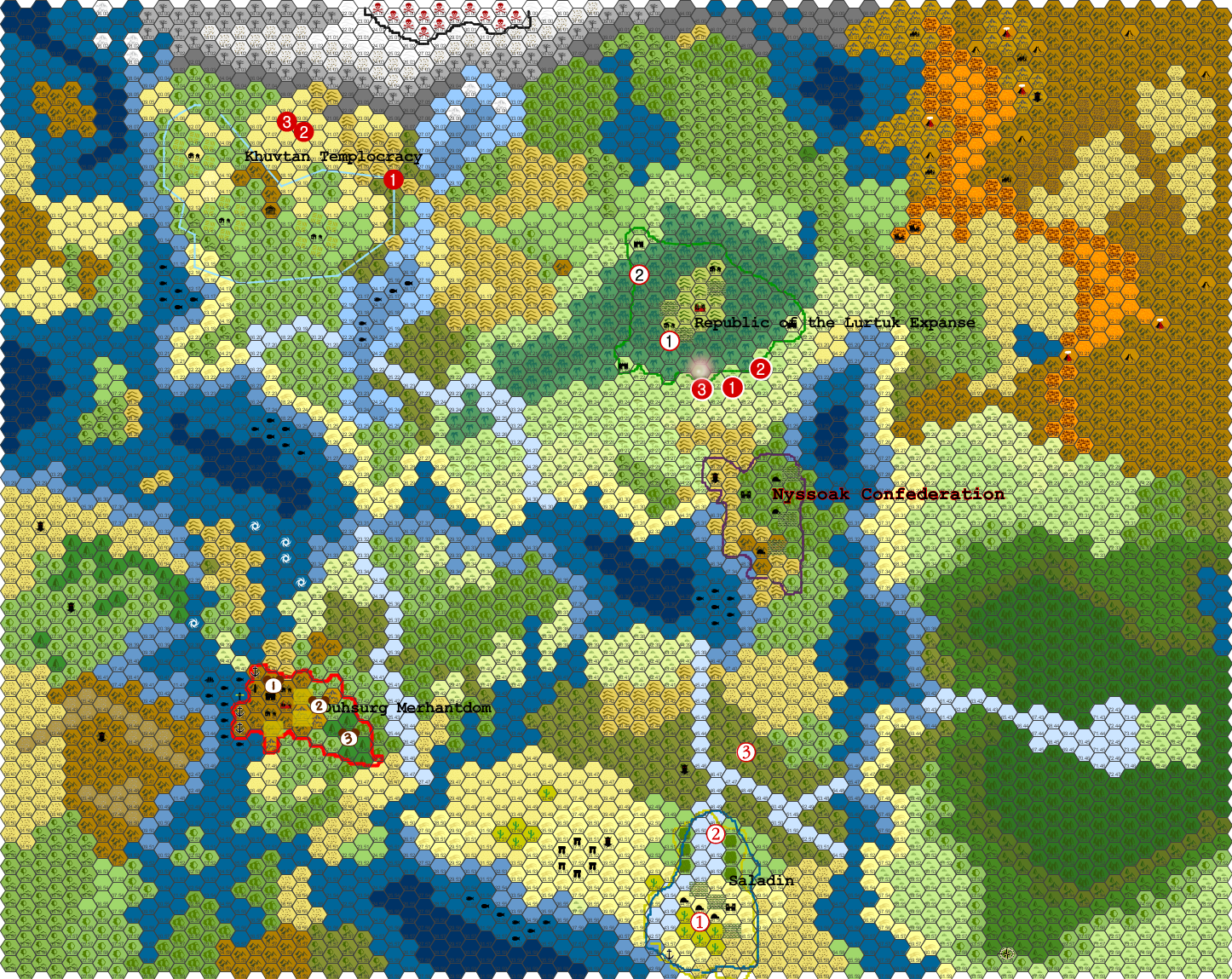 Turn 2, saw the Winds of the North gain a small modicum of power. The Khuvtan marshall their armies in preparation.  The Lurtuk mobilize its Republican Army,  as the Nyssoak Grane Host marches on the fields south of the capitol.   A mighty battle erupts which served to bring down the Republic.
The Nyssoak Grane Host suffers some casualties but many tribesmen and magical creations lie broken upon the field.  The next day the Lurtuk Shaman Congress concedes to the Elves.  The Lurtuk Beastrider's Army scatters into the Expanse to cause trouble for the occupying elves for years to come. 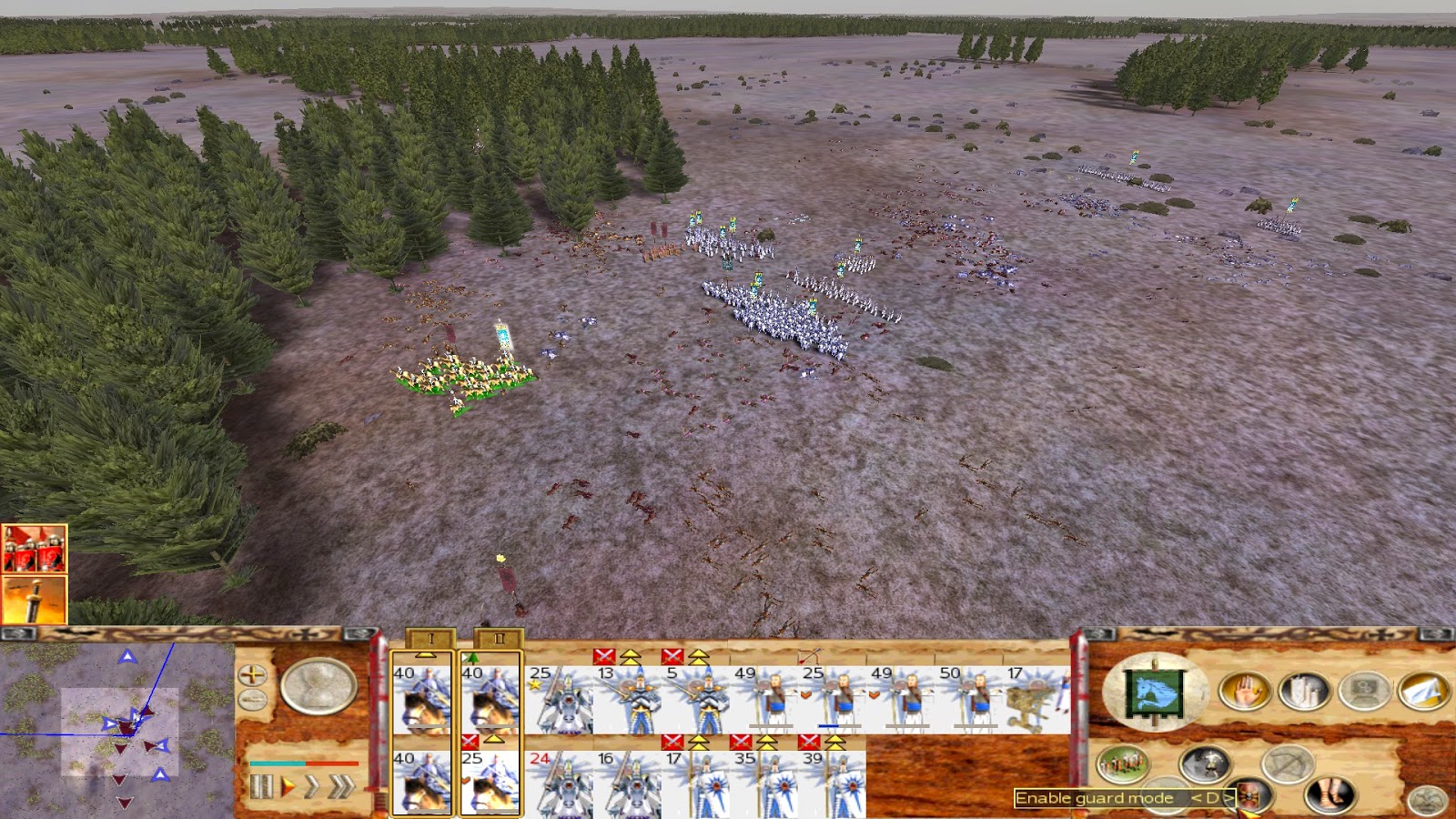 The surviving members of the Elven host mop up tribesmen in the woods. 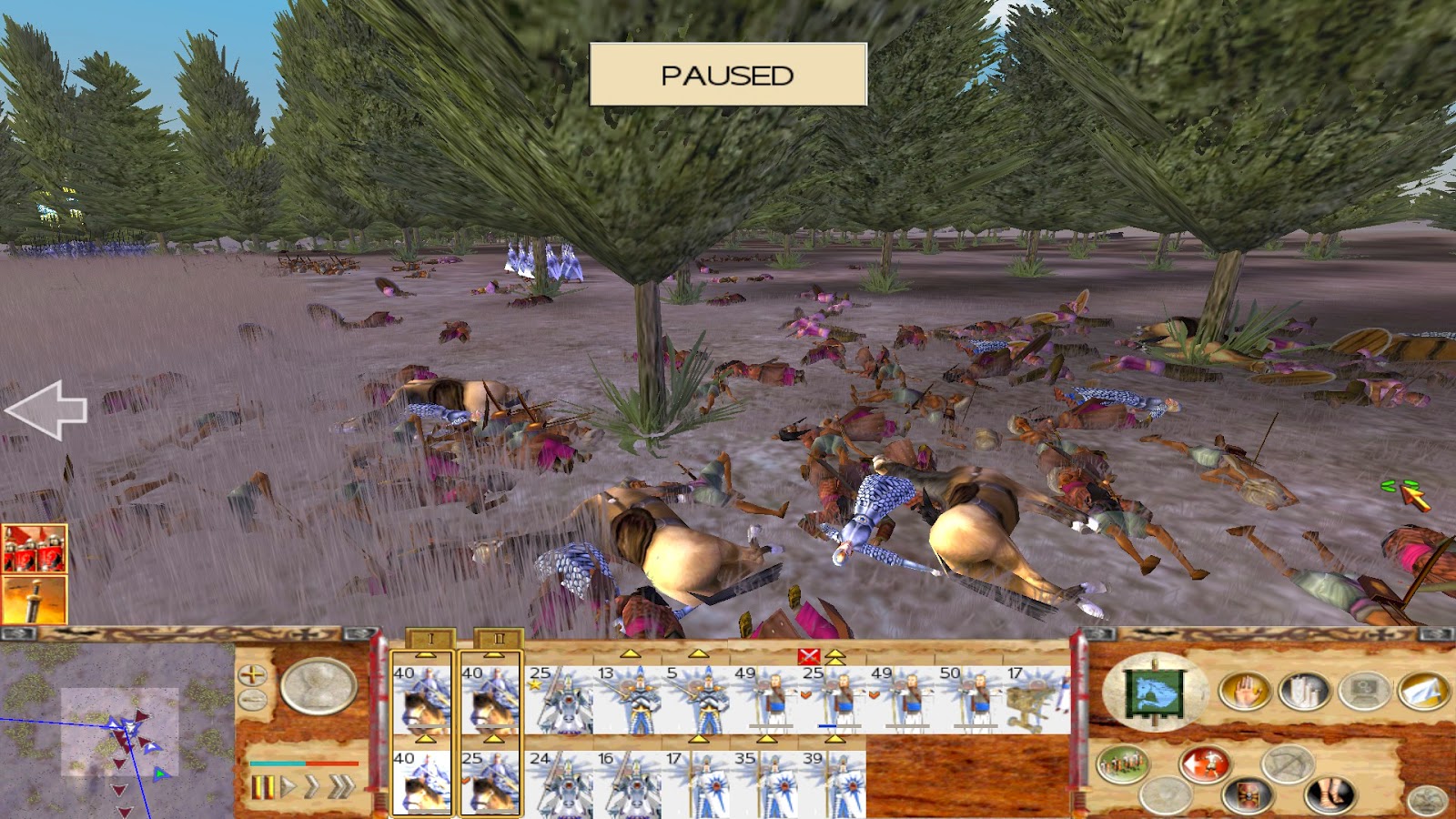 The tribesmen came in brazen waves to wash upon the Elves, but outflanking Nyssoak missile cavalry and hardworking archers kept the Lurtuk at bay, and inflicted a grim toll on their number 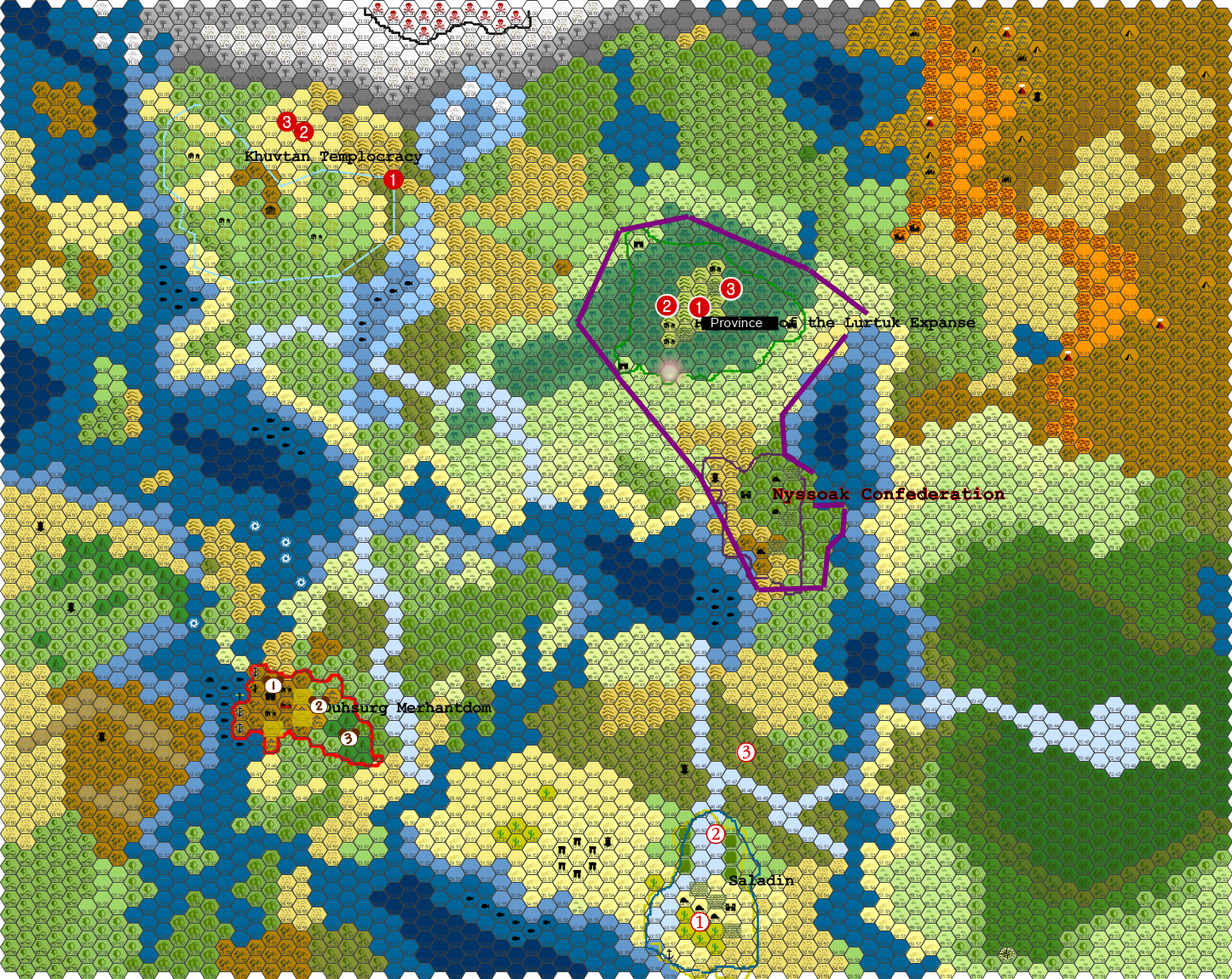 As the glittering Elven warriors marched through the open gates of the Lurtuk Capital triumphant in their step, the question now upon the minds of everyone.  Were the elves destined to be rulers of all, or had their brutal offensive captured to much territory too quickly?


-Your Favorite Madman-
Posted by Impcommander at 9:00 PM No comments: