Continuing a campaign from earlier in the year, in which JD and Chris participated in, we have JD's Dwarven prince returning to his sponsors towns, while Chris's Cynheid remian in the Northern areas of Helos. If you'd like to see some of their previous exploits you might want to check out the AAR written by Chris on his blog here...  Sippin' on Paint Water, in which a recon force of Chris' Human Cynheid troops, with the Dwarf regiments of JD's in tow, save Prince Torum (JD's main character).

After the success of that battle, the two split their forces. With JD heading south to the Dwarven Demilitarized Zone...

Upon arrival at the town of San Martin JD learned about Orc recce troops, probably hearkening  a new Orc offensive pressing at the cities holdings in the surrounding countryside,  desperately coordinating a plan with a local Alliance artillery base, JD opts to defend the town from the oncoming Orc soldiers. 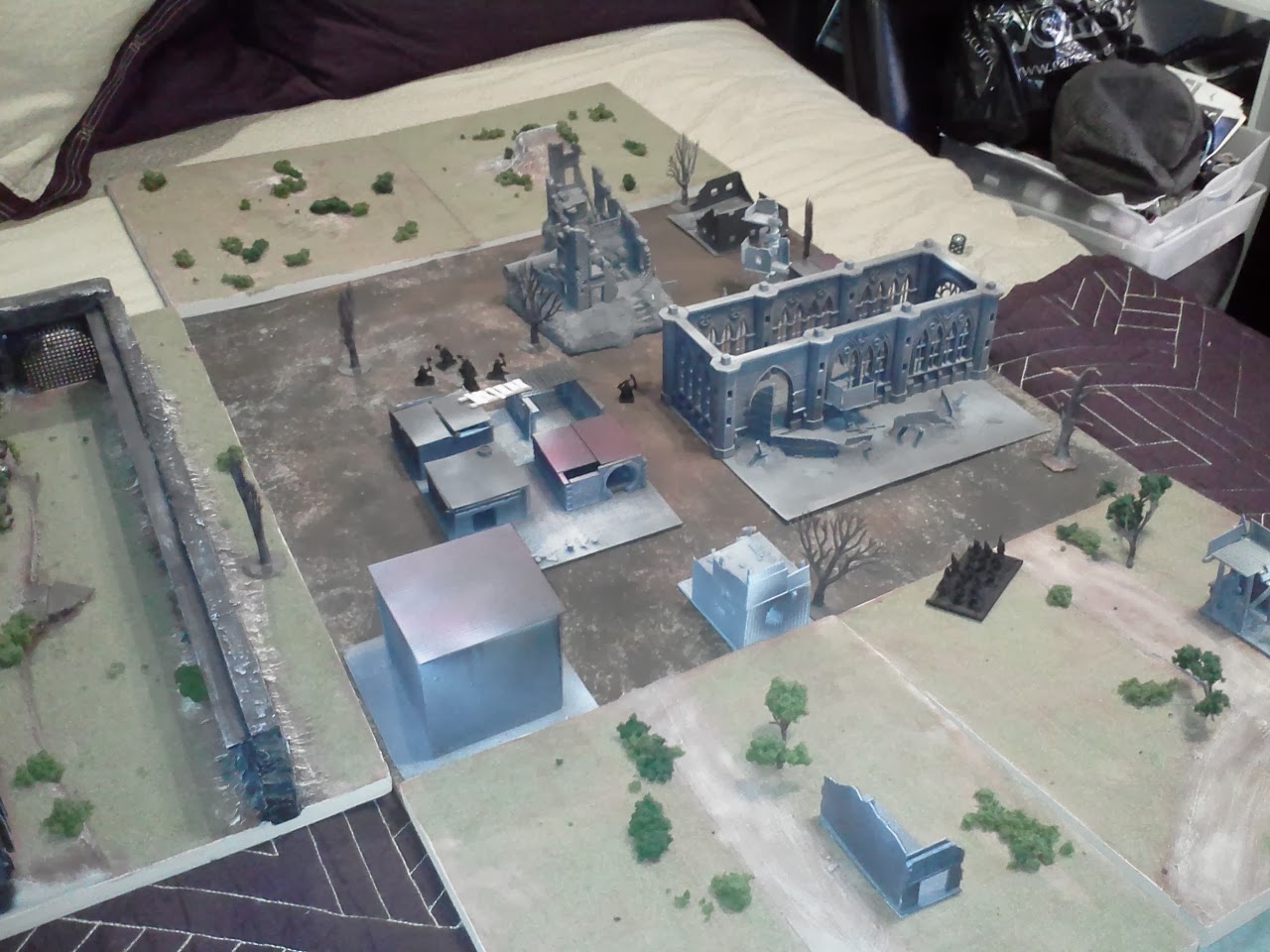 Positioning a handful of lookouts in the Town halls observatory, They call out possible movements in the dark night as the Orcs draw nearer 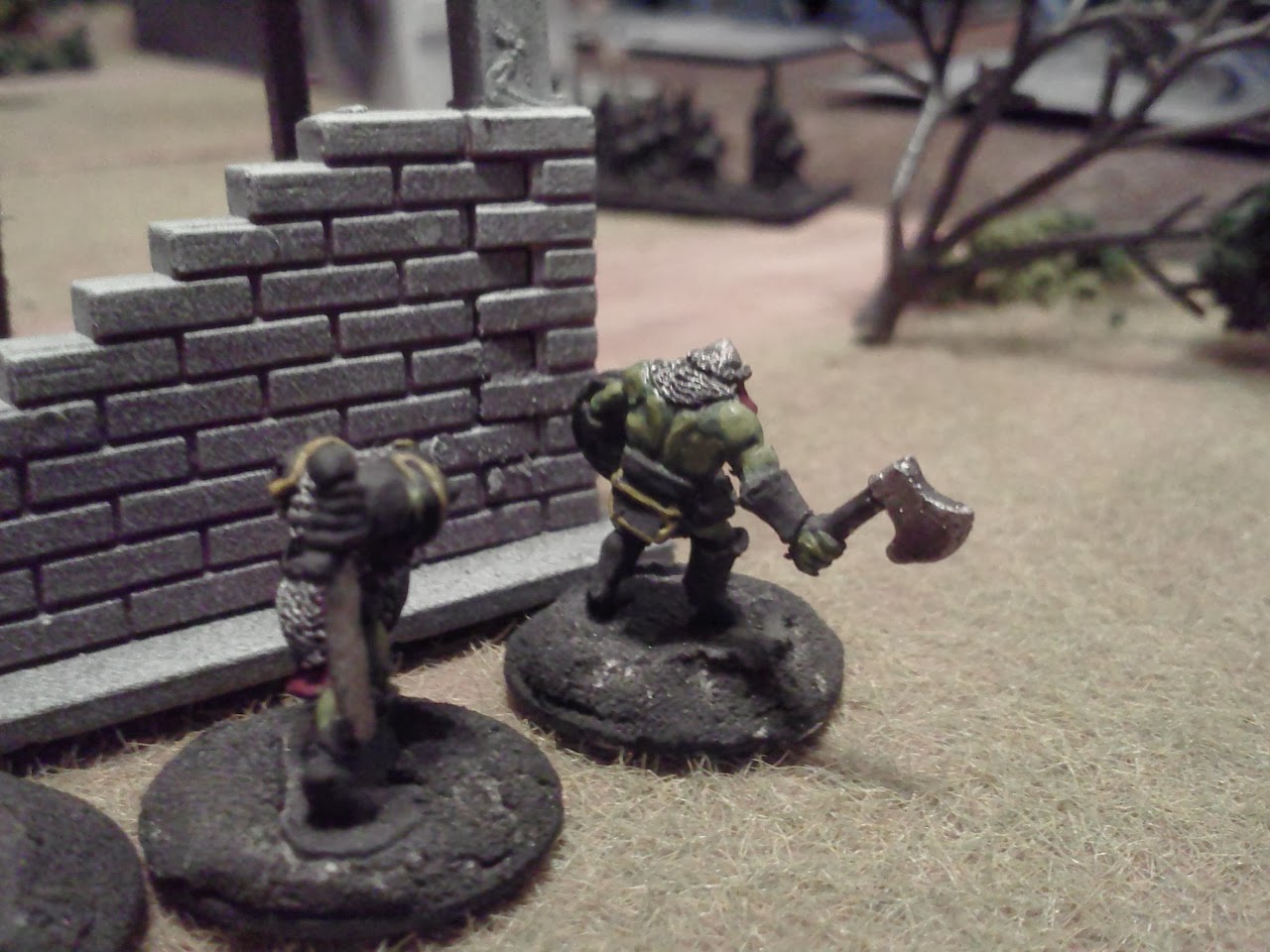 The first scouts draw up to the edge of town 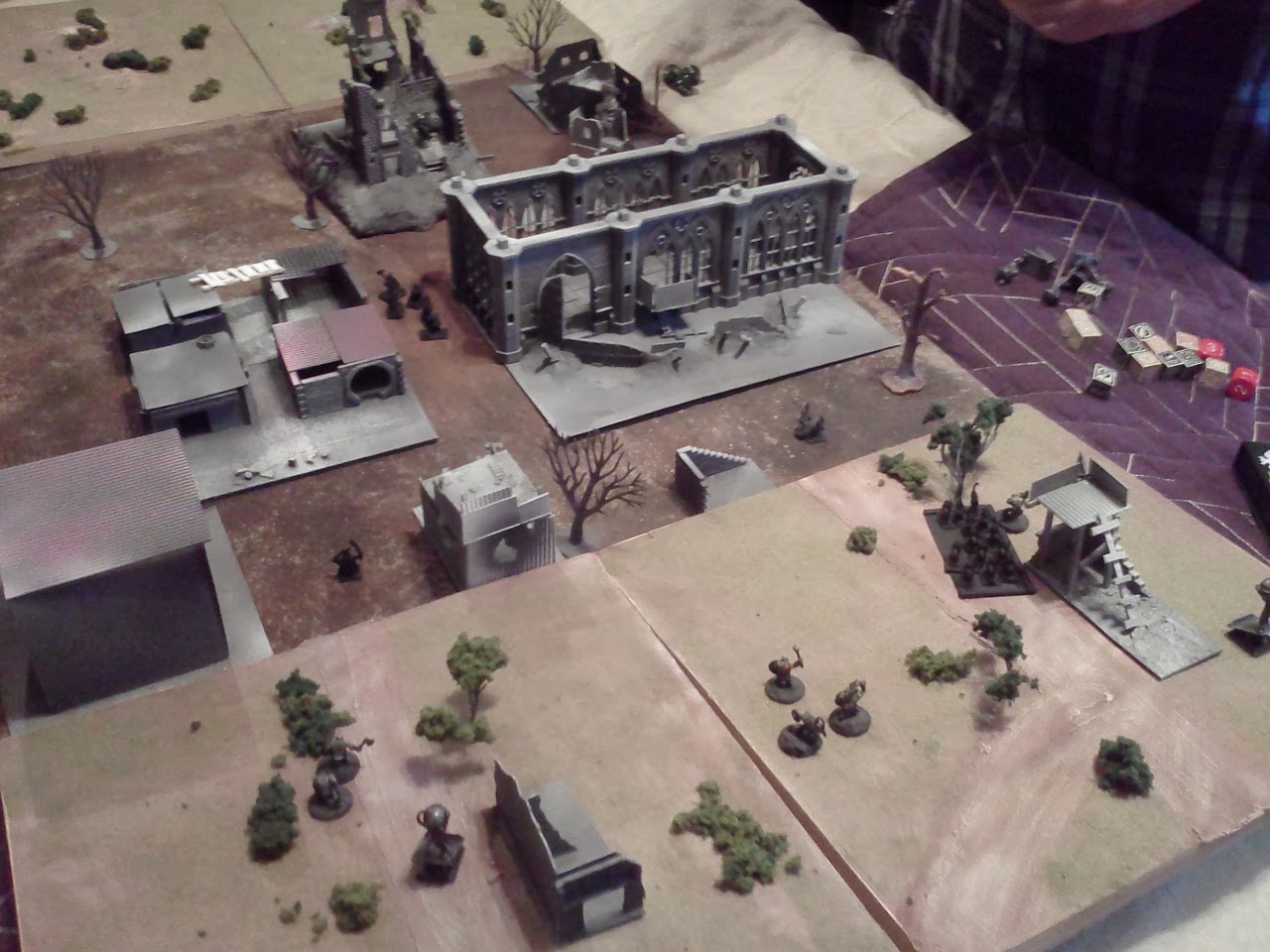 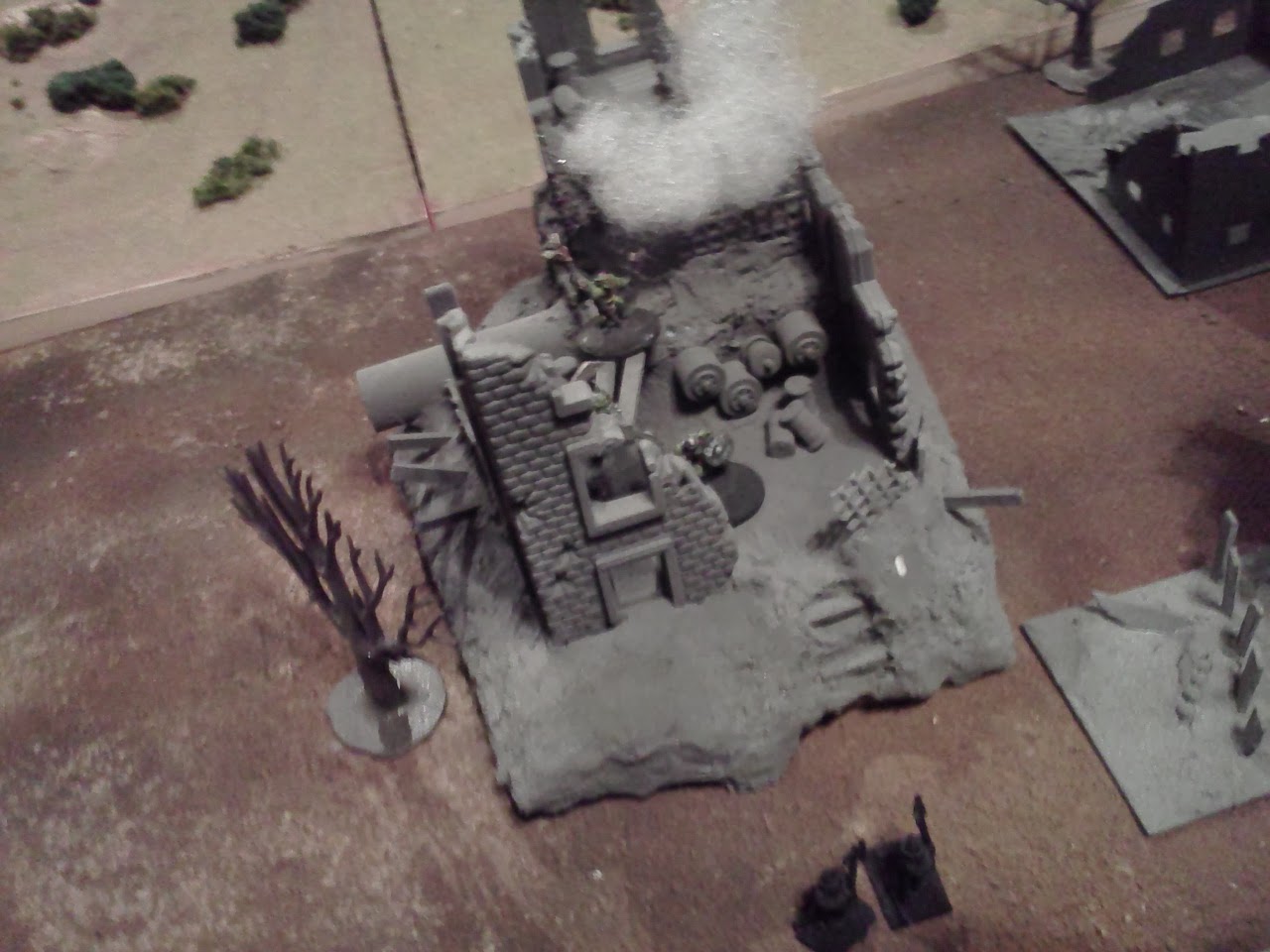 A Orc terror squad sneaks past the blips in the northern side of town, and sets fire to a building, Dwarfs from the "Paladins of Orerock" rush to secure the area. 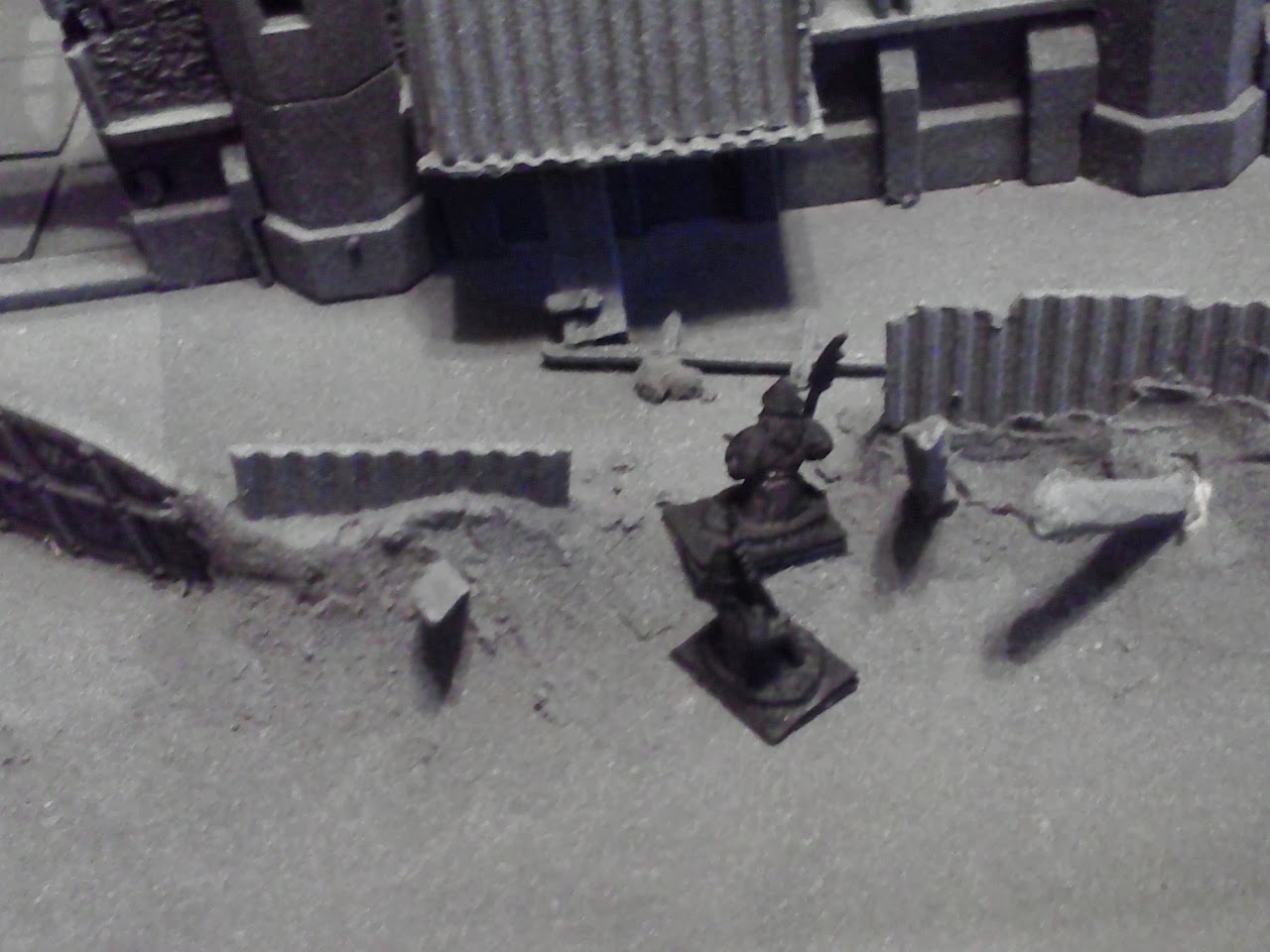 members from the train of walking wounded, coming from the south side of town, into the hospital. 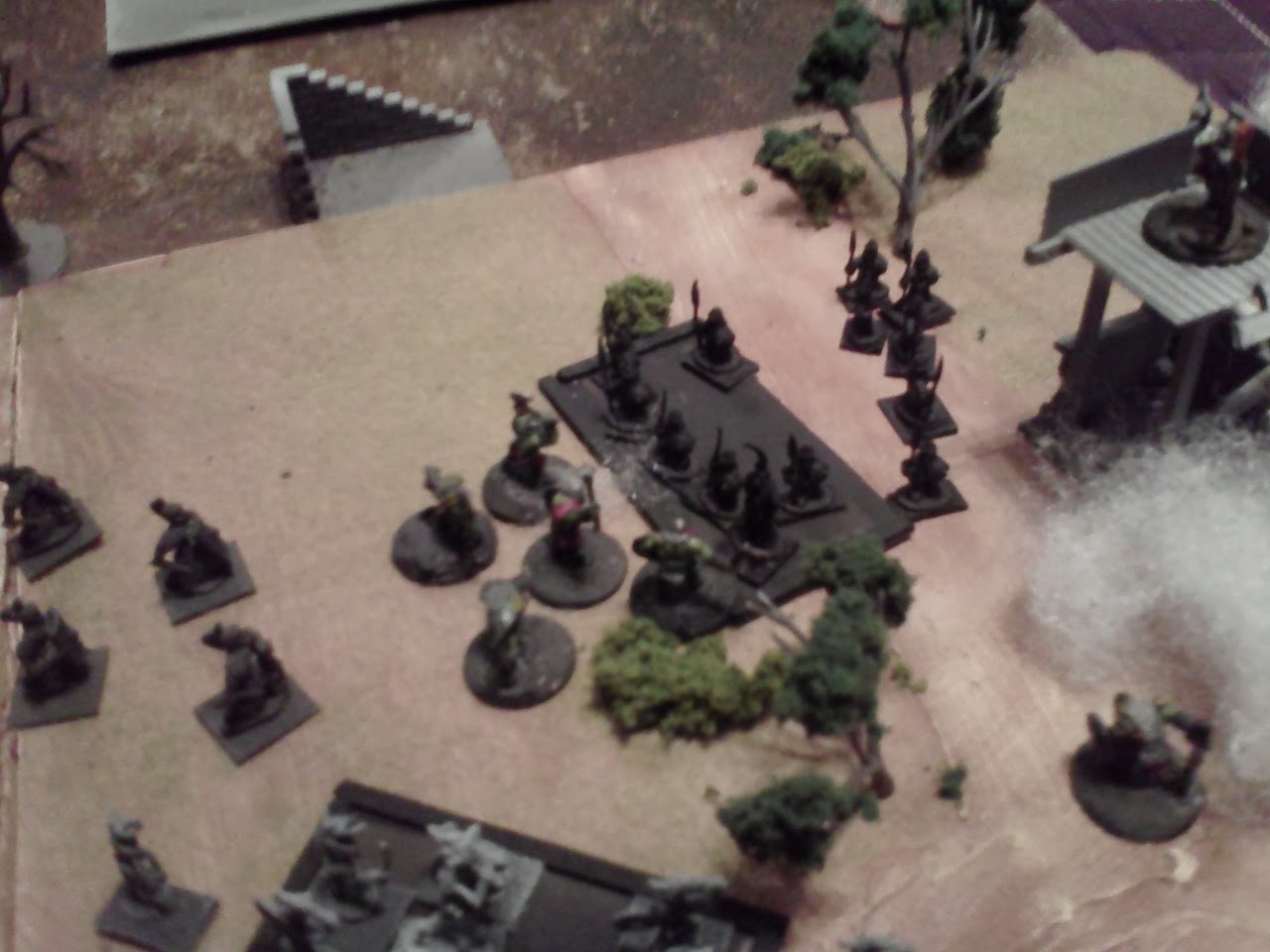 Things begin to get hairy in the south as the sheer bulk of the Orc onslaught starts to present itself.

The riders JD had sent to the Alliance Mortar base, arrive, to give Torum word that the base commander agreed to send a barrage to the town.  It would now be a race to get the Dwarves free of the barrage area, and keep the Orcs out of the town at the same time. 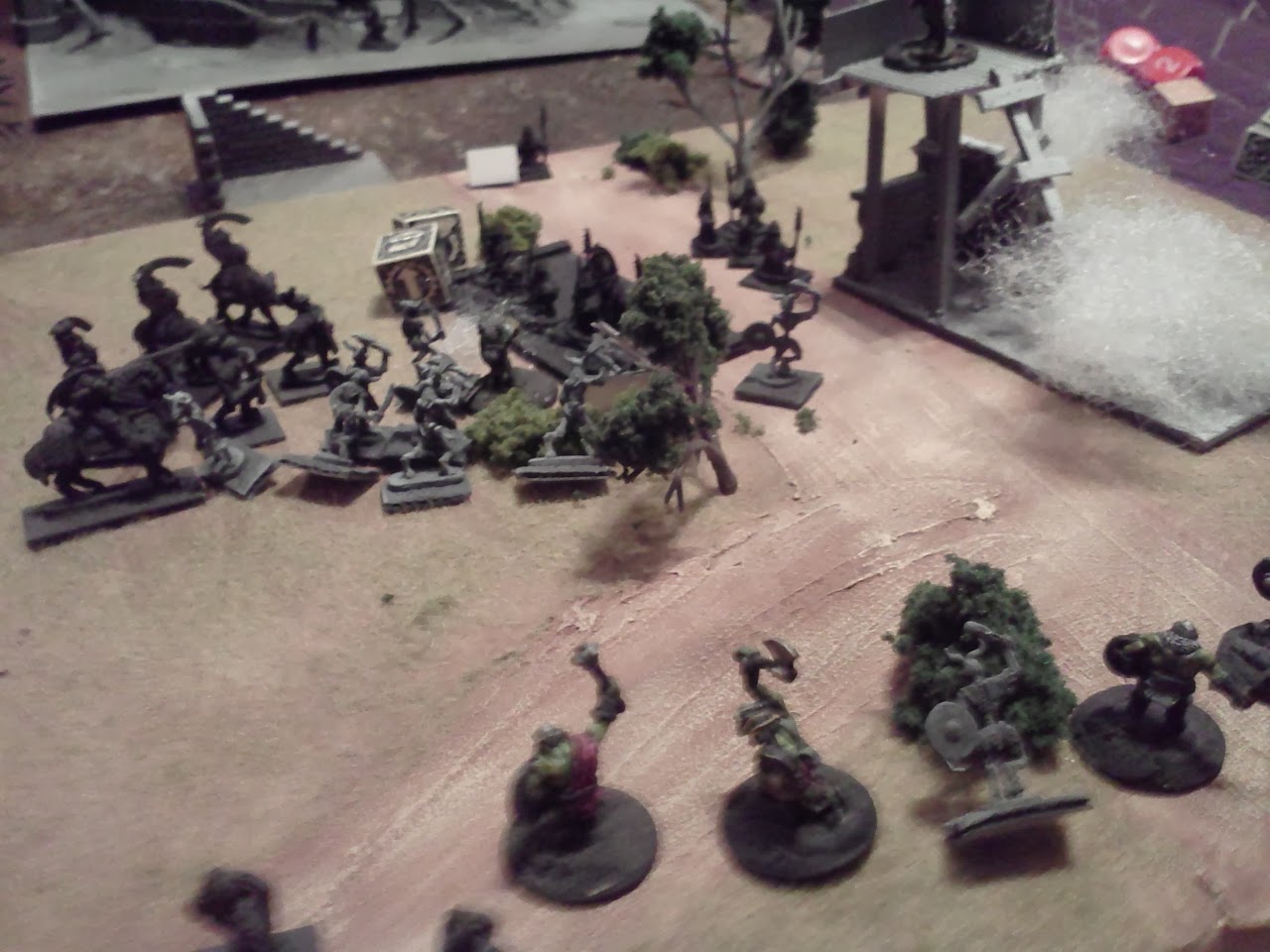 The riders, charge headlong into the melee to relieve pressure on the beleaguered spearmen. 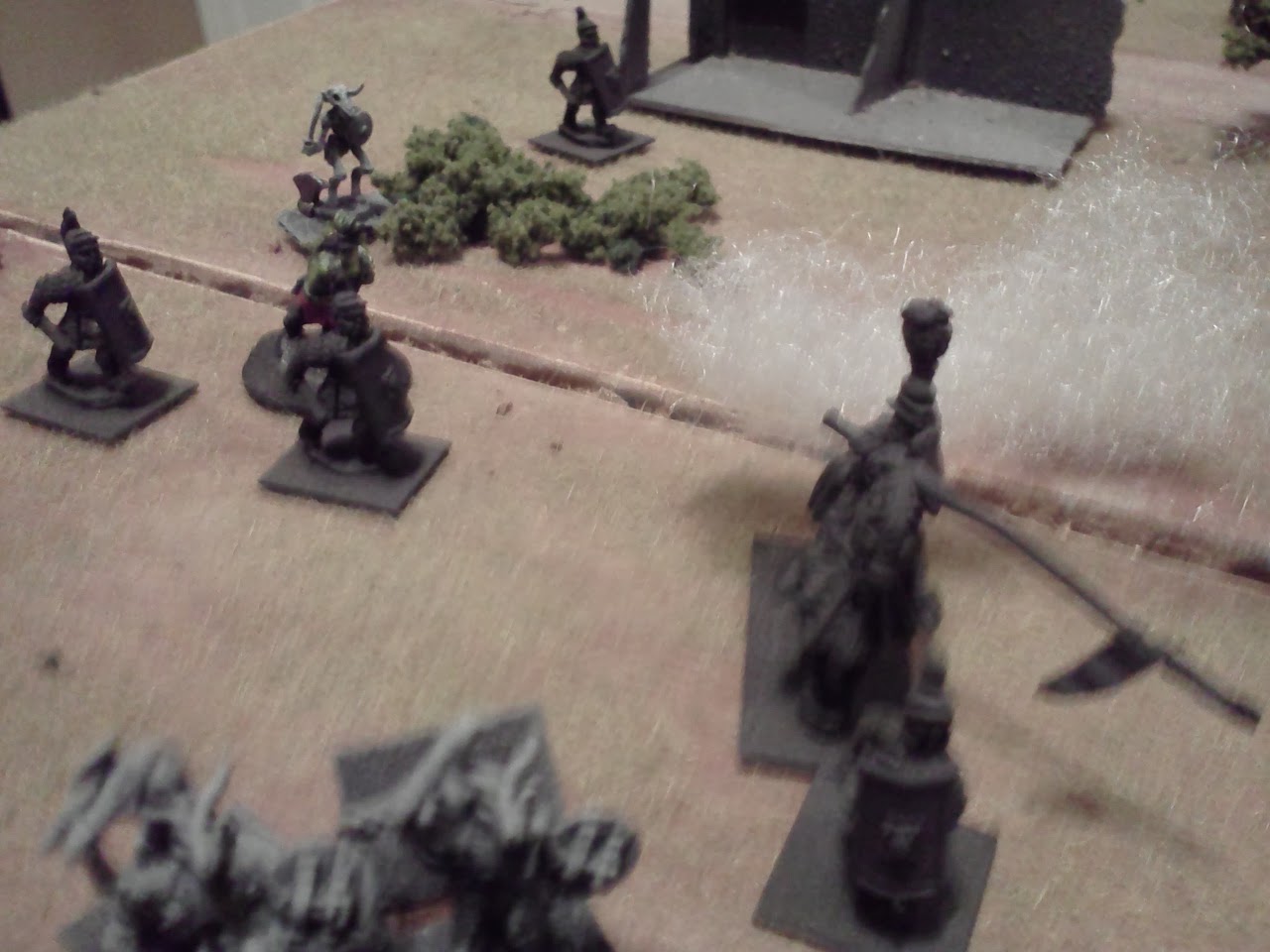 The leader of the Cavalry (and second in command of the whole army)  Captain Mardak, orders his horsemen to fall back, as the freshly disengaged spearmen begin to reform outside the hospital. 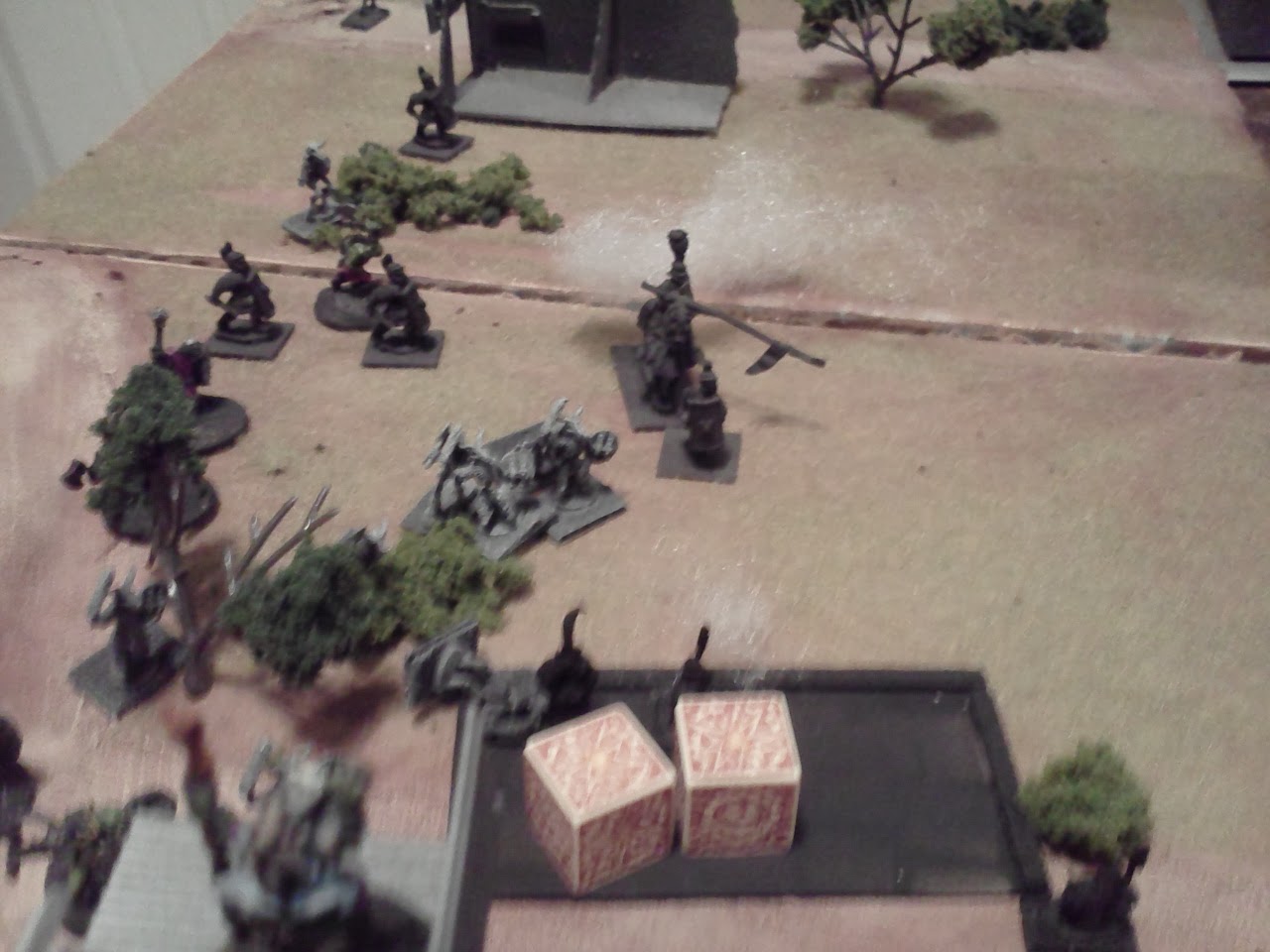 Mardak, the Captain of the Spearmen, and a ranker from that same regiment hold off the Orcs to save their friends as the time runs down before the artillery hits.

Mardak, killing no less than 5 Orcs (an impressive feat) is able to gallop back to the freshly reformed dwarven lines,  just as the two spearmen are mercilessly cut down. 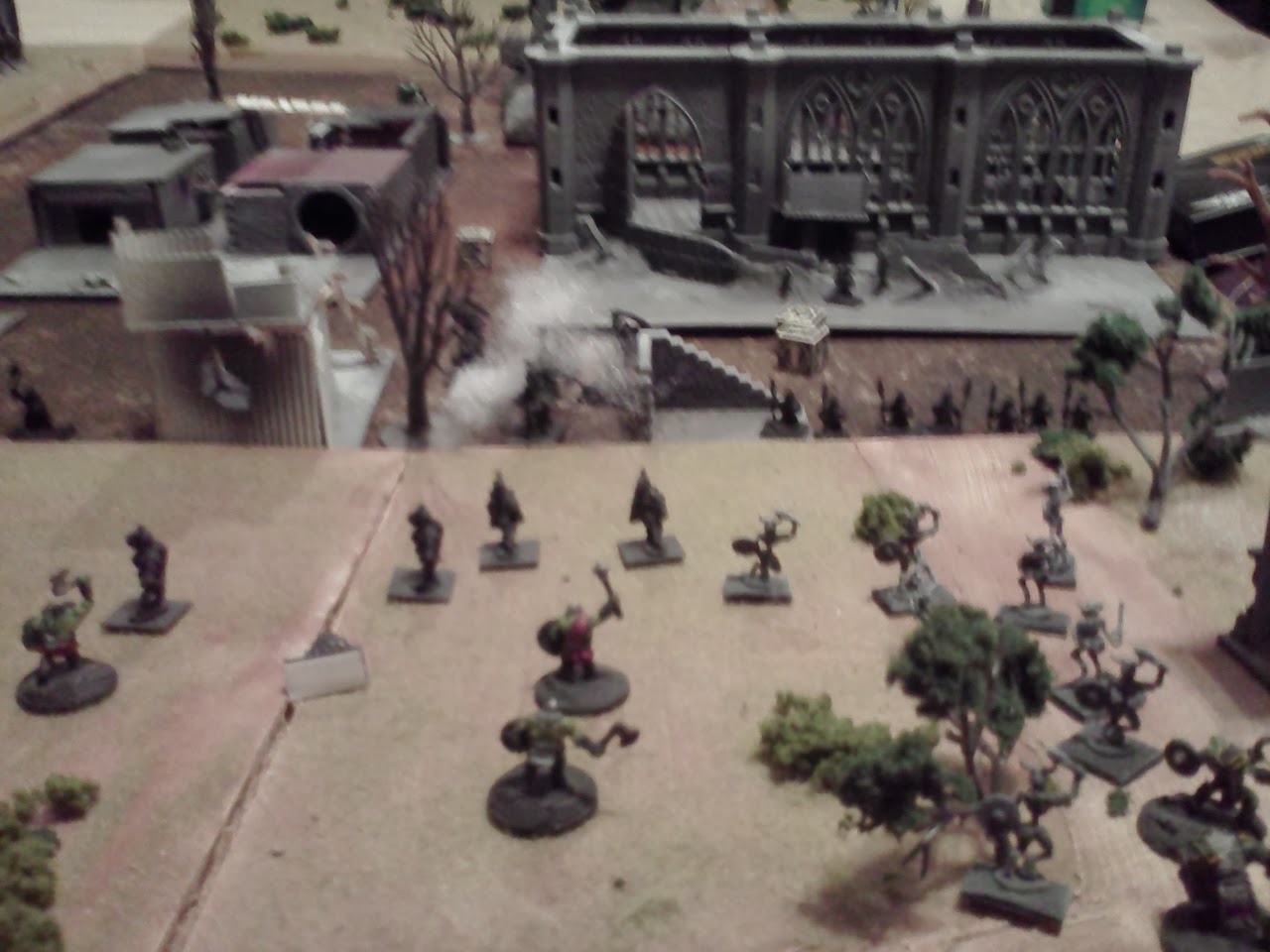 The Orc tide moments before the artillery hits home 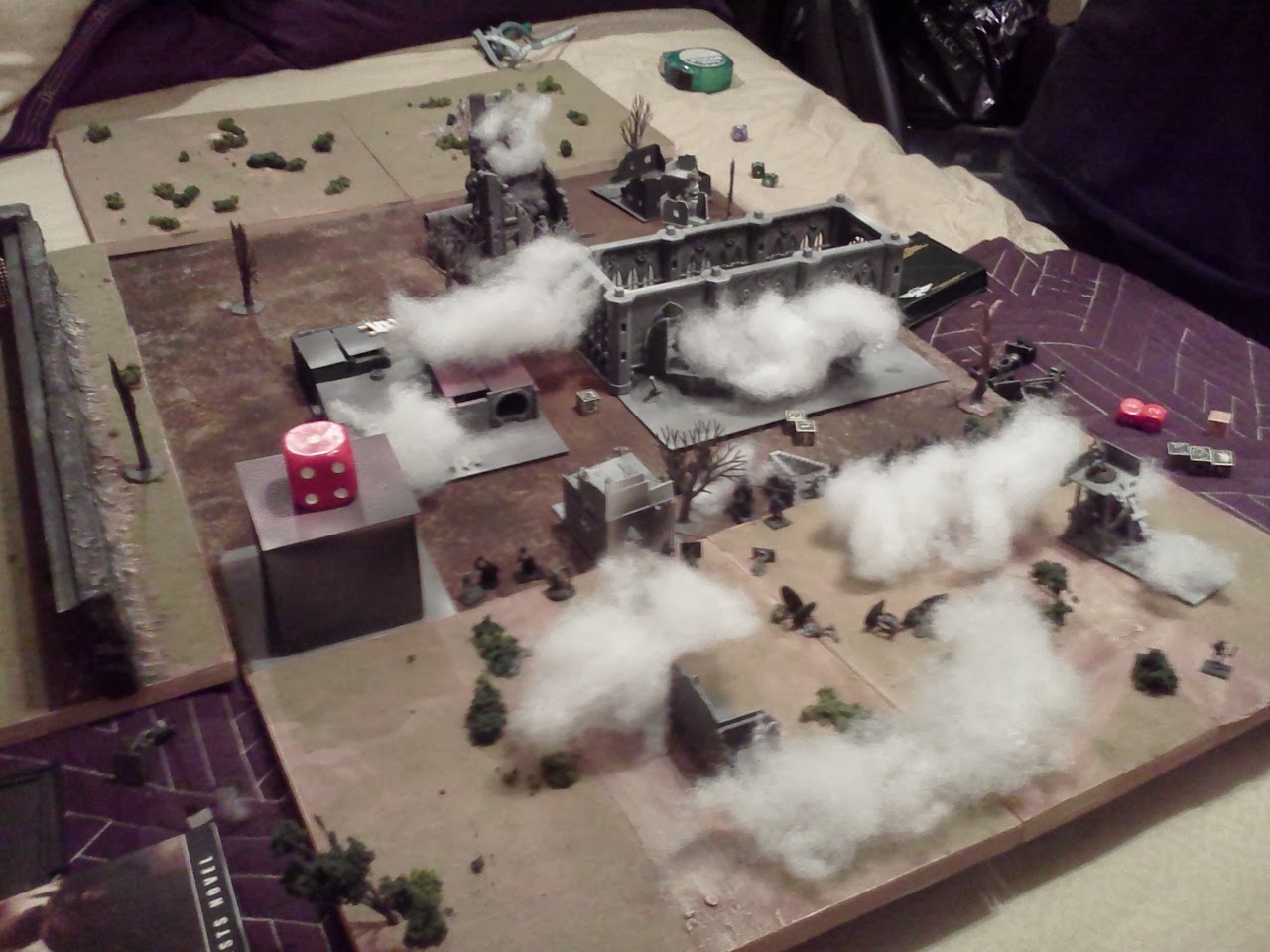 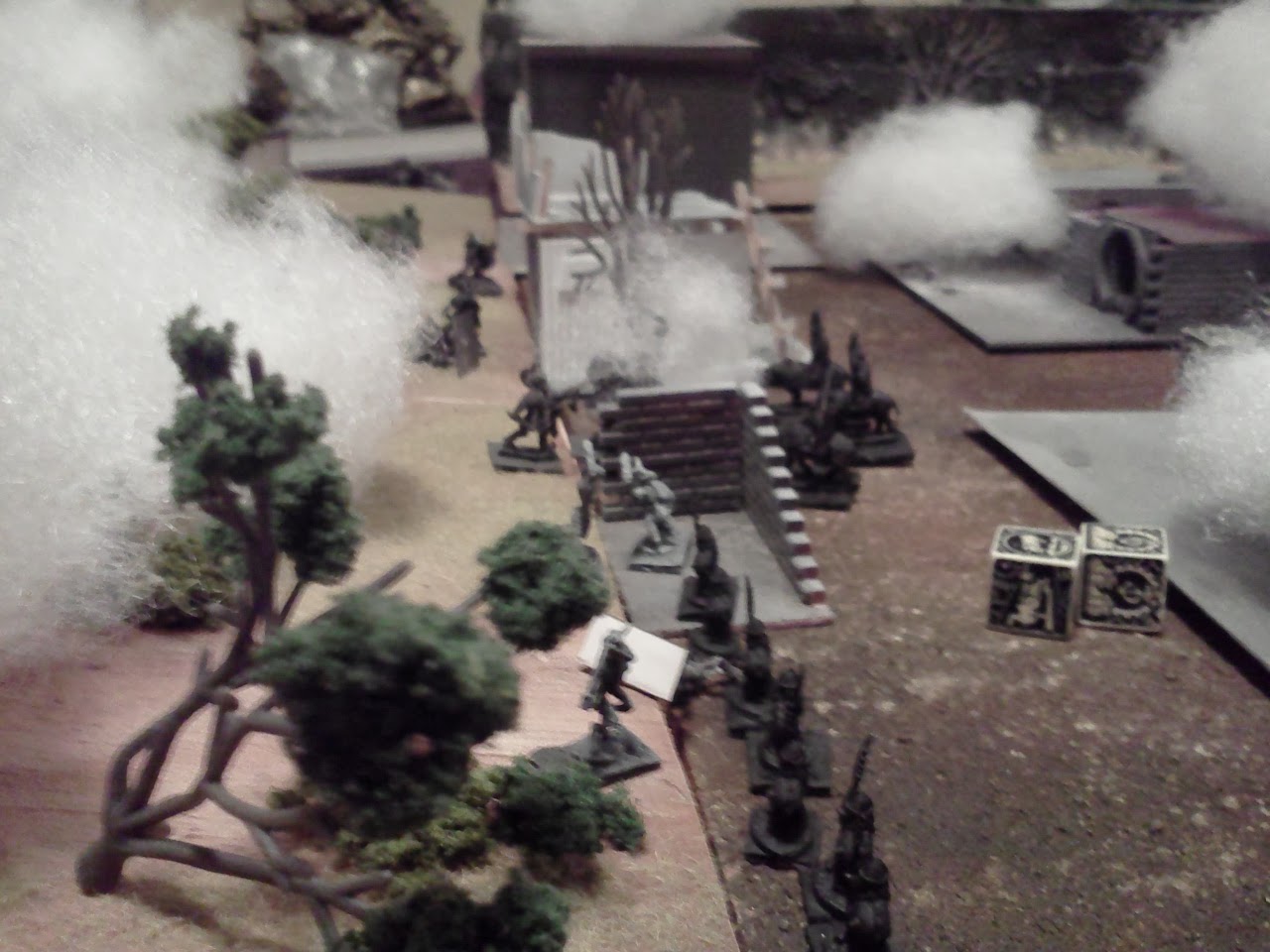 With a cataclysmic roar, the mortar shells explode across the southern side of town, tragically some overshoot, hitting the town hospital, and a portion of the residential district.

The Orc terror squad that attacked in the north, voluntarily surrendered being met with being trapped in a burning building on being slain on the Paladin's Blades.
From them the location of the Orc FOB. in Terisia was pried,  one was given to the citizens who beat it to death,   one was mercilessly tortured, and the other has been escorted to Alliance Military Intelligence Command outside Karmenac.

Fires still burn in San Martin, but the Orc recon units have fallen back across the border... for now... and Torum is now scrambling to accumulate a force large enough to take the fight to the Orcs

This is of course a gross over simplification of several days of Roleplaying the democratic aspects and the troop movements involved getting to and following this battle.

I discovered rather embarrassingly that i don't have nearly enough of a supply of fantasy buildings which i am currently attempting to rectify.

Hopefully you found this entertaining, and is usual with posts about Regimentals...

here is the link to my wix site with the PDF for the rules only on it, Regimentals Download Link

If you like what you saw, and enjoy the rules, have suggestions for those rules, or just questions about anything concerning Regimentals.

Please don't hesitate to email me at  impcommander@gmail.com 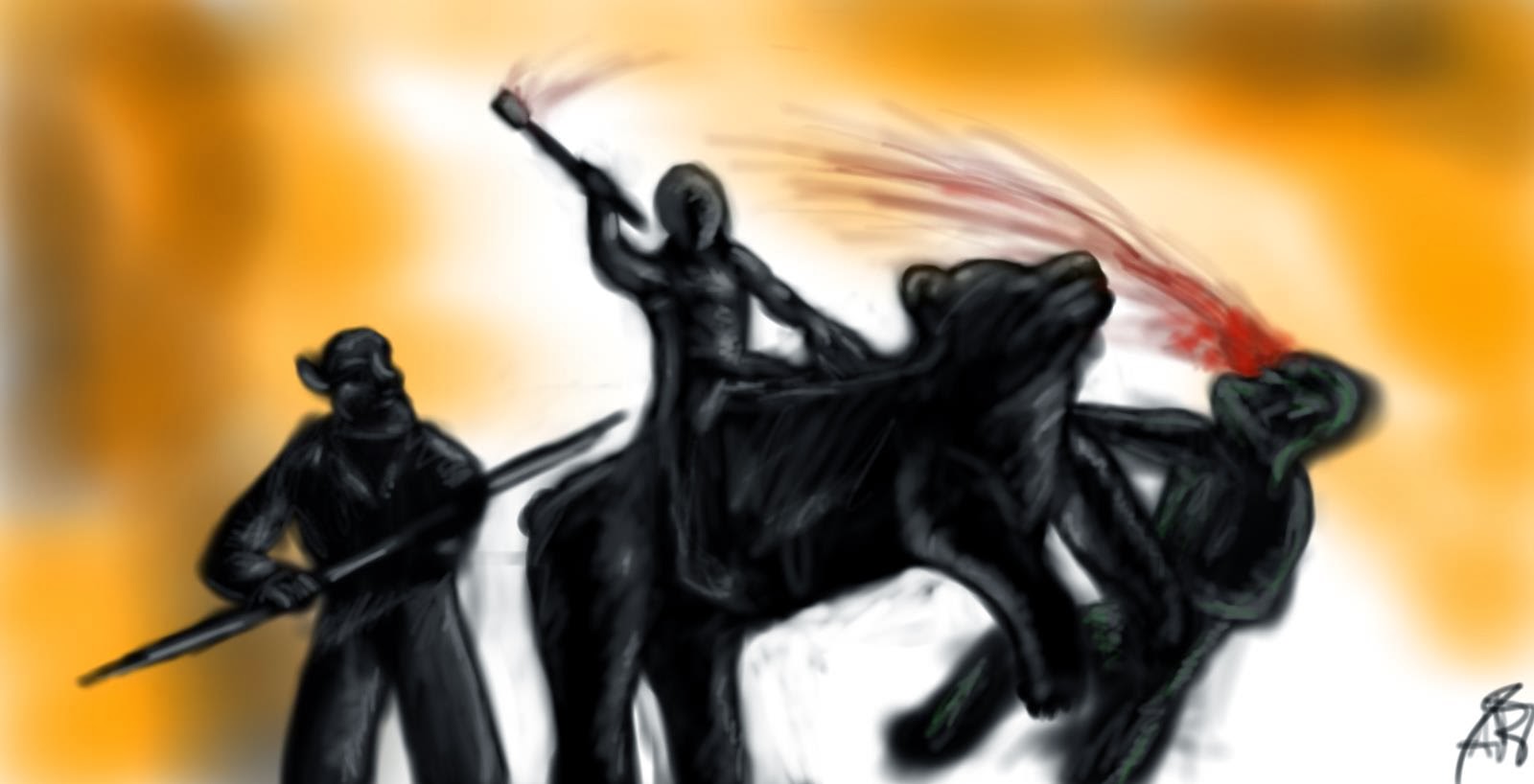 A quick drawing of Mardak's Stand