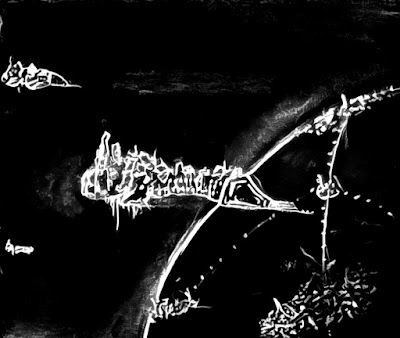 
Lugon gripped tightly to the railing encircling his command dias at the center of the ship's bridge as another barrage of ork fire hammered into the hull. Sparks showered out from some vital system above him, the rain of fire accompanied by the flickering of cogitator screens and the distant screaming of ratings.

"Crash Teams deployed to Decks 20-24, sections open to vacuum along Enginarium 1 and 3, Ignatius Fury is listing hard and burning, Mortis Nobilum reports they are moving to engage." reported the thickly bearded officer in the clipped cadence of the navy.

"Damnable Greenskins" Lugon hissed under his breath, the fleet had slammed into the aliens' cursory forces above Ankou's capital, Linces Hive and as was to be expected the xenos had returned the engagement with gusto, but what gusto it was. He had fought pirates in the rim worlds with the System fleet, tenacious and cutthroat men, gripped with desperation and a wealth of ill-gotten weaponry. They had been close run times, but this was something new altogether, pirates had a quantifiable boundary for violence and would surrender given enough void torpedos and lance battery strikes, but orks?  Of the three dozen vessels above Linces Hive, only 4 still remained, outnumbered ten to one by the massed ships of the Imperial Navy, Adeptus Astartes, and Ark Mechanicus, the ork juggernaughts had blazed away in all directions with a blizzard of fire of such magnitude that it was nearly impossible to tell where the spotting fires of damage ended and the white glow of gun batteries began. He furrowed his brow, and stared at the flickering hololithic display on his dias, many of the system fleet vessels, which had been in the vanguard, were already limping out of the immediate danger posed by the alien ships. The Mortis Nobilum a strike cruiser from the Imperial Dragoons chapter had moved to their support and was hammering the Ork Kroozer currently firing upon the ship. He closed his eyes and slowly breathed in the smoke-stained air, before making the most difficult decision of his life.

"Bring us around again, prepare the gun crews for another run in!" He declared to the bridge crew sternly. The three dozen officers sat in shocked silence, their terrified, wide-eyed faces, soaked with sweat and ash, looked like a sardonic parroting of the Ork's themselves in the green glow of their screens. After a short pause, the Helmsman, Tenric Cessaire, got to his feet, straightened his jacket and in a shaky voice addressed Lugon.

"Sire, prow shielding is faltering, we are venting atmosphere in multiple places, We may not endure another attack run. I urge you, please for the good of the crew, allow us to return to the second line, allow us to preserve the ship!" finished Cessaire.  The ship rocked again, more gently this time, as a torrent of small bore missiles glanced off the hull, only serving to strengthen the helmsman's argument as far as the rest of the bridge crew was concerned.

"The Emperor's Angels are present on the field, and whats more have come directly to our aid. I will not embarrass the system fleet by abandoning them. Nor will I turn tail and run while an alien vessel still sits polluting Jornathii Space. We will go forward, my decision is final Cessaire.  Full speed ahead." He stated, as calmly and in as commanding a voice as he could manage as he suppressed the fear rising inside him.

"Aye Sir." Cessaire replied raggedly, sitting back down at his station, he engaged what power could still be nursed from the surviving engines and the Sarans Farewell began its approach to firing range once more. As the ship powered its way forward, Lugon watched as the final few layers of prow shielding were torn away by the weight of the alien's fire. He barely heard Hadris' panicked reports of hull integrity,  he continued to stare intensely at his hololithic display, the Mortis Nobilum was just entering into its broadside sweep. The Ork vessel had taken a beating, regardless of its ferocious lashing out, it was close to death, its crude flickering void shield cast a crackling net of orange light across its hull. But the many guttering fires across its breadth were evidence enough that it was beginning to falter. If Lugon had estimated things properly, and he was bargaining everything that he had, the combined broadside of both his ship and that of the Mortis Nobilum would be just the thing to overwhelm the Ork shielding and crack the berzerk kroozer once and for all.  He watched transfixed at the display, as the icon of the ship moved closer, and closer to the pale yellow circle surrounding the marker for the alien ship. Never in all his life had he thought that a handful of holographic polygons could absorb him so completely, harnessing an impossible potential for hope and dread in equal parts. When finally they fell within the encompassment of that yellow circle, he screamed out his order.

He had yelled the words with such a great strain that he could feel the faint wet tang of blood and mucus in his throat, even with that effort though, they had almost been drowned out by the sure cacophony of the bridge as the ship groaned like some great dying beast, its frame melting from the heat of massed laser weapons fire and cascades of torpedo hits buckling across the whole of the ships starboard side. Power failed totally on the bridge then, only emergency life support still functioned, and even that was stammering. The sound and light and violence were at once replaced by an eerie tomb-like silence for a moment before the crackling sound of fires and the groaning choir of wounded men drifted in.

Seconds past, filled only by piteous cries and the dancing light of electric fires. Seconds gave way to minutes, filled with more of the same. The creeping dawn of excited hope began to claw its way up through Lugon's stomach and scratchy throat. The power flickered back for an instant, before dying once more, but it had been enough for him to see what he needed. The yellow circle was gone, gone because there was no more need to measure proximity to a target that did not exist.

He was beside himself with relief, he slumped down to the deck next to the hololith displayer and smiled.

"Jornathii Vendratus, you green bastards" he rasped to no one in particular.