AoS: The Unmooring of County Ledzuit

The County Ledzuit was watched over by the family Henrich for over two centuries, in that time the county has seen a great deal, in 2084 beast tribes fleeing the scouring of the Sun Knights reaved through the coutryside, and in 2131 the lesser necromancer Yertari Ov had her occult rituals thwarted by an assembled party of Ledzuit militia and footmen of House Henrich.

Nothing in its history would prepare the county for the strange event, recalled by later historians as the Unmooring.

It would begin with an unexplained forest blaze coming from the direction of Coll's Manor, a secluded estate, its Lord Barthe was singularly known as especially peculiar and reclusive, living for many years without incoming revenue off the bequeathed wealth of his deceased father. He had only a handful of working farmers and a pitiful assortment of roving livestock. Which is all to say that he was a recluse, and not well liked. Regardless, it was the responsibility of the Henrich's guard to look after all the people of the land and Barthe is nobility after all. 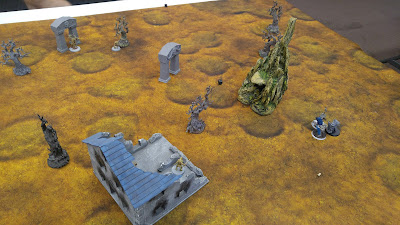 The footmen, upon treading through the blackened and smoke wreathed remains of the fallen tree trunks came upon the blasted open shell of the Manor house.  A singular figure stood silhouetted by the still burning fires of the interior. Perhaps once it was the eponymous Lord Barthe,  now what stood before the handful of footmen was a malformed ghoul of weeping flesh and dripping muscle, crowned with a blasphemous helm of bone. Spotting the footmen the creature shambled forth, clutching an unnatural mace, which pained the eye to look upon for its otherworldly origin.  Unsheathing their weapons, the footmen moved to defend themselves, as the monster lumbered into striking range.  In a burst of impossible vigor, the thing lunged at them, bringing its mace below the guard of Jerik, smashing into his torso.  As the flesh began to sag and drip from the screaming footmen his comrades descended upon the thing, hacking, and stabbing with terrified abandon. 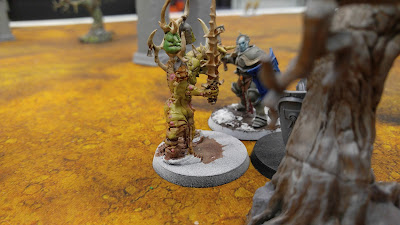 Even with the creature lying in a pulpy mulch of gore, a rasping wet breathing could still be heard. The two remaining footmen breathed frantically with the rush of adrenaline that terror had brought them. Before the high could leave them they saw the other shapes in the trees, dozens, or possibly more smoke veiled figures limped silently towards the manor.  The footmen fled back to their masters in House Henrich, to bring word of what they had encountered. 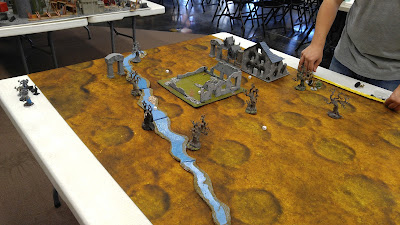 As the might of House Henrich gathered, reports filtered in from around the county. Gibbering bands of the unquiet dead and maddening shoggoths of hateful flesh stalked the land as the impossible harbingers of a nightmare invasion.

With greater numbers and the lords roused, the guardians of sanity lent themselves to the defense of the land. The footmen and militia under Lord Henrich himself found battle within the still burning ruins of Fannhollow village, a particularly grotesque monster and his retinue of fleshy pus weeping knights met the men of house Henrich along the stream on the southern edge of the ville. 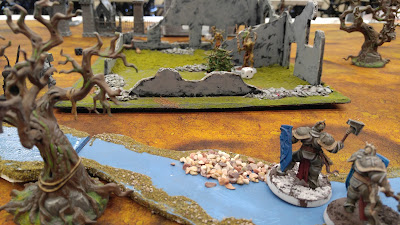 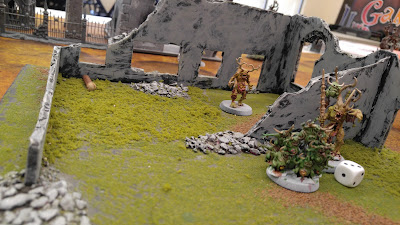 With immense effort the creatures were battered down, each flesh thing taking dozens of grievous wounds to succumb to the damage. The unnatural leader of the force, in particular, was seemingly immune to harm, while using a blade of fused spinal vertebrae to scythe down any that stood against it. 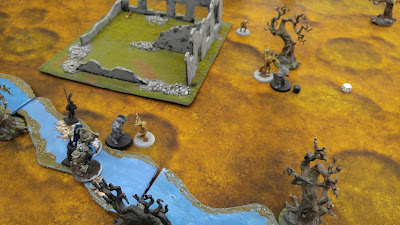 At the height of the fighting, as one, the creatures turned and simply withdrew from the field, as if called as one by a greater will to another more pressing concern. Lord Henrich marshaled his surviving men, and taking his most trusted personal guard with him, gave chase to the fleeing monsters, sending the rest of his retinue to gather as many additional fighting men as could be found.

Ascent to the Ebon Pyramid 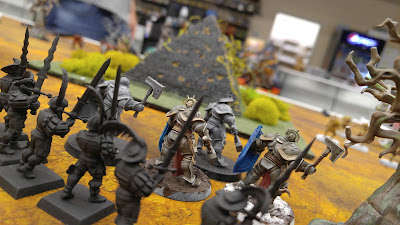 For hours the men of Henrich's household guard tracked the creatures through the woodland. Though night should have long since fallen, the woods were lit by a persistent baleful twilight. The origin of this light and indeed the source of the creatures themselves was at last revealed to the men of County Ledzuit.  A sinister obsidian pyramid stood at the center of a clearing surrounded by esoteric statuary, a ragged portal shone above the structure, weeping corposant and ichor, the doorway spat forth more of the horrors.  A pitched battle was already raging around the nightmare portal, barbaric knights of an unknown alignment hacked into the throng of creatures, each one of the armored warriors chanted a hymnal that burned the ears and made the skin itch with the sound of the un-words. 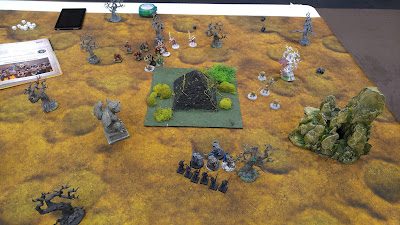 Resolute to bring an end to the situation, Henrich and his footmen move into the pitched fighting. Banking on sword and shield to subdue the portal's unholy influence. 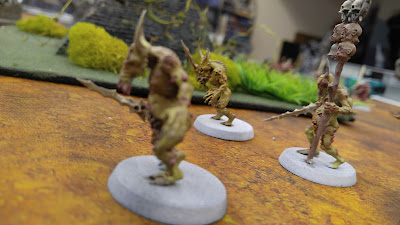 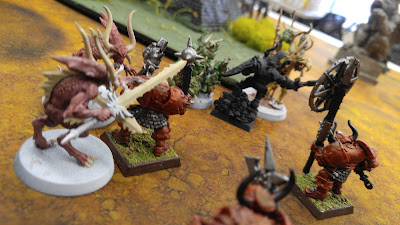 In moments, the outcome of the fighting would be moved into certainty, the men of Ledzuit laid low a half dozen of the revenant creatures and came within reach of the chanting knights who were still crowded by a throng of the monstrous entities. As the Lord Henrich ordered his forces to support the strange men, an overwhelming stench of ozone flooded out from the weeping portal. Several of the men around the Lord suddenly dropped their weaponry and clutched their heads or fell to the ground screaming in total agony. In horror Lord Henrich watched as his men's skin melted away revealing a bloody goosepimpled hide, twisting spurs of bone reached forth from the skulls of the dying men.  Still screaming in agonized death, towering bloodsoaked monstrosities stood up from a pile of flayed skin.

In desperation, the surviving men crowded around their lord, resolved to die standing against the horrors. To their surprise, the bloody creatures turned away from them descending upon the twisted flesh monsters besieging the strange knights. In short order, the blood monsters defeated the revenants, and after a guttural order from one of the strange knights, they bounded up the black pyramid and into the portal. Silence fell across the clearing, the only warriors still standing on the grisly field were humans. The largest of the knights turned towards the huddled knot of Henrich's footmen, and held up his sword in salute. Before he and his attendant warriors followed the blood creatures into the portal.

After the last of the knights had entered the portal, the tear in reality snapped shut with a wet sucking noise, that made all in the vicinity dizzy and nauseous. None of the creatures have been seen since, nor any of the knights despite through investigations by members of the Collogia Aracanis. The only clue was found by investigators in the charred remnants of the Coll Manor, an aged leather bound book untouched by the flames, with an odd tri-lobed symbol embroidered on its cover. The interior filled with barely conceivable word forms, only one word was discernable to those that viewed it, a phlegmy unpleasant word...

Posted by Impcommander at 11:48 AM No comments: