Summary: Guffmans Platz Defense Cohorts, as well as units from Merchants Houses, and local Huscarls, push into the mountain passes north of the city, in an attempt to purge the Blood Axes under the direction of Warboss Krump, and the Deffskullz, lead by Kolonel Grimmskull out of the highlands. the Offensive was preceded with 8 companies of the Jornathii Ork Hunters scouting out Xenos strongpoints and guiding Mechanized Infantry and Armored assets into these targets. The situation quickly gets out of control, the scope of the operation proves difficult for the inexperienced Jornathi field commanders to coordinate on their own. The nature of the Blood Axes, counters the typical Imperial dogma concerning the Orks, and many units are ambushed by Ork Kommandos and eradicated, The Influx of Imperial troops excites the Greenskin tribes, all across the northern theatre, and soon the mountains are dotted with scattered Imperial units, fighting ever increasing numbers of Ork infantry, as their ammunition supplies dwindle. Guffmans Platz command fully underestimates the difficulties of resupplying the troops in the mountains, they had expected the Orks to rush headlong at well disciplined columns of Chimera and Leman Russ', the reality was that the greenskins had outmaneuvered them completely. None of the officers wanted to be the ones to admit the depth of the mistake and order the withdraw, so instead PDF units lingered, without solid directions or objectives for 3 full days, until Planetary command, ordered the Offensives' end, at which point JSOB (Jornathii Special Operations Battalion) and Astartes Units needed to be moved in, to draw the Ork troop concentrations away from the besieged Imperial Guardsmen. 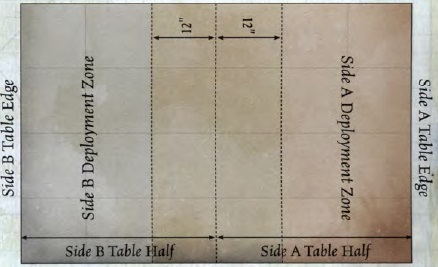 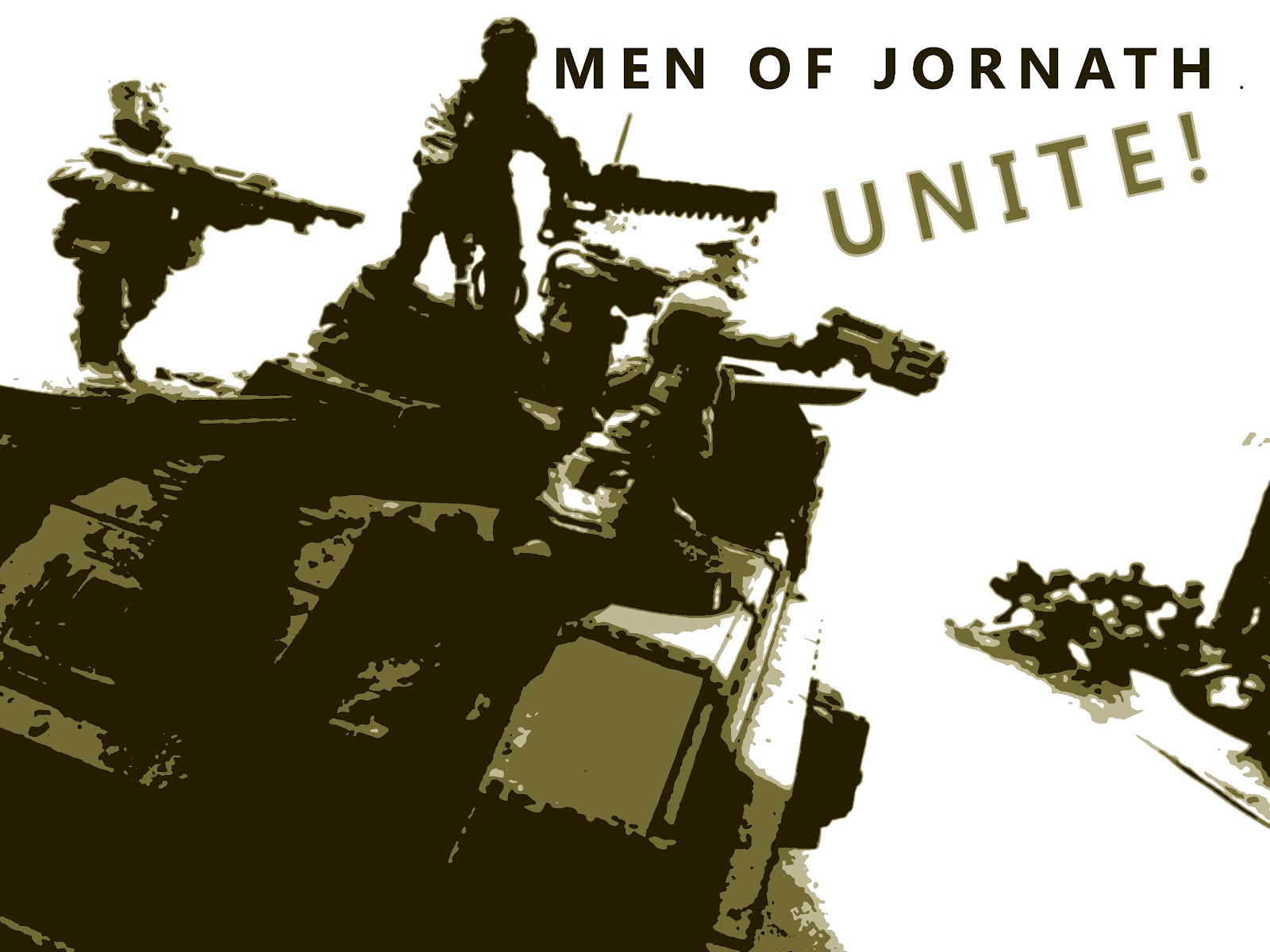 Imperial Victory:   Orks lose 50 points in the next game played against the Imperial Guard, and must re-roll sucessful reserve rolls

Ork Victory:  Gain 75 points of Boyz, in next game played against the Imperial Guard.

POINTS:
Imperium-  200 - 300 points. Chosen exclusively from Elites, Troops or Fast Attacks.  All units MUST have a Toughness value, and cannot have an invulnerable save or a armor save of 2+ .   These units do not have to obey restrictions of any kind,  ie.  2 Tactical Marines, 4 scouts,  2 bikers. Etc.

1-2 Assassinate-  An Ork Nob of a minor tribe is in this area,  he will be located centrally, and may not be moved until the sentries are ACTIVE!    The Imperium will win if the Nob is dead at the end of turn 5,  If he survives, past this, or the Special Forces team is destroyed, then the Orks will win. The Nob may be no more than 50 points.

3-4 Precision Strike- Infiltrate the center of an ‘’ Orky Fort’’, plant and defend a beacon so that the Navy can flatten the camp using precision strikes.   The Special Forces unit must plant a beacon in the exact center of the table. This is done by moving to that location and remaining stationary for 1 turn. This now counts as an objective, the Imperium must hold this objective uncontested for 2 consecutive turns to claim victory.  (Bonus points if the SF  Team makes it off the table)

4-5 Purgation - An Ork Artillery Position is pinning down units,  scuttle the guns’ ammo stores and slay all the Xenos that you find. Turn the location into a pyre of dead aliens!  3 Ammo Dumps(Armor 11 with 2 Hull Points)  are placed by the Ork Player,   the Imperium must attempt to destroy at least 2 of these dumps before turn 6.  Ork Player is allowed to place all ammo dumps.

Sentries: Sentries are units that are not expecting to be in combat, but are still equipped to fight.  They have two states ‘passive.’  and ACTIVE!.   They will always start the scenario in passive this means that the controlling player will not have direct control of their movements. Sentries are placed anywhere on the board that the controlling player wishes.  In the controlling player's’ movement phase they will roll a scatter die for each sentry unit.  This is the direction and facing for the unit.  They will move 6’’ in that direction, on a ‘hit’ the unit may move in any way the controlling player wishes. In order to become ACTIVE! The unit must have true line of sight from a sentry to an opposing model or if a ranged weapon is used within 36’’. This is why facing for sentries is vital, as the LoS for activation is dependant on the facing of the miniature.  ACTIVE! Sentries move and fight as normal, moving, running, charing etc as in normal games.

Response Forces: If the special forces are spotted, or if more than 3 of the sentries teams have been killed, the Ork troops being held in reserve will be deployed from any table edge of the controlling player's choice.   To simulate the escalating stakes of the mission, you may want to recycle fallen Ork Boyz into new mobs to keep the pressure up on the Special Forces team.

Assassinate-  If the Ork Nob is still alive at the end of the scenario, then the Orks will gain a 250 point detachment lead by the same nob in the next battle they fight Imperial Guard.    If the Imperium is successful,  the Imperial Guard, will gain 2 sections of free Agis Defense Line with Autocannon turret for free.

Precision Strike- If the Special Forces team is successful in destroying the Ork settlement, all Ork Leadership statistics are lowered by 1, in the next game they fight Imperial Guard, and all Ork Reserve rolls remain at a 6+ for the entire game. If the Orks are successful, in stopping the humans, they will gain a free 10 man unit of Boyz in ‘eavy armor, in their next game.
Purgation- If th special forces team is successful,  the Imperial Guard will gain 2 Agis Defence lines and an autocannon turret in their next game. If the Orks are successful, they will gain a 2 use round of shooting, from an off board unit of  3 Lobba’s . 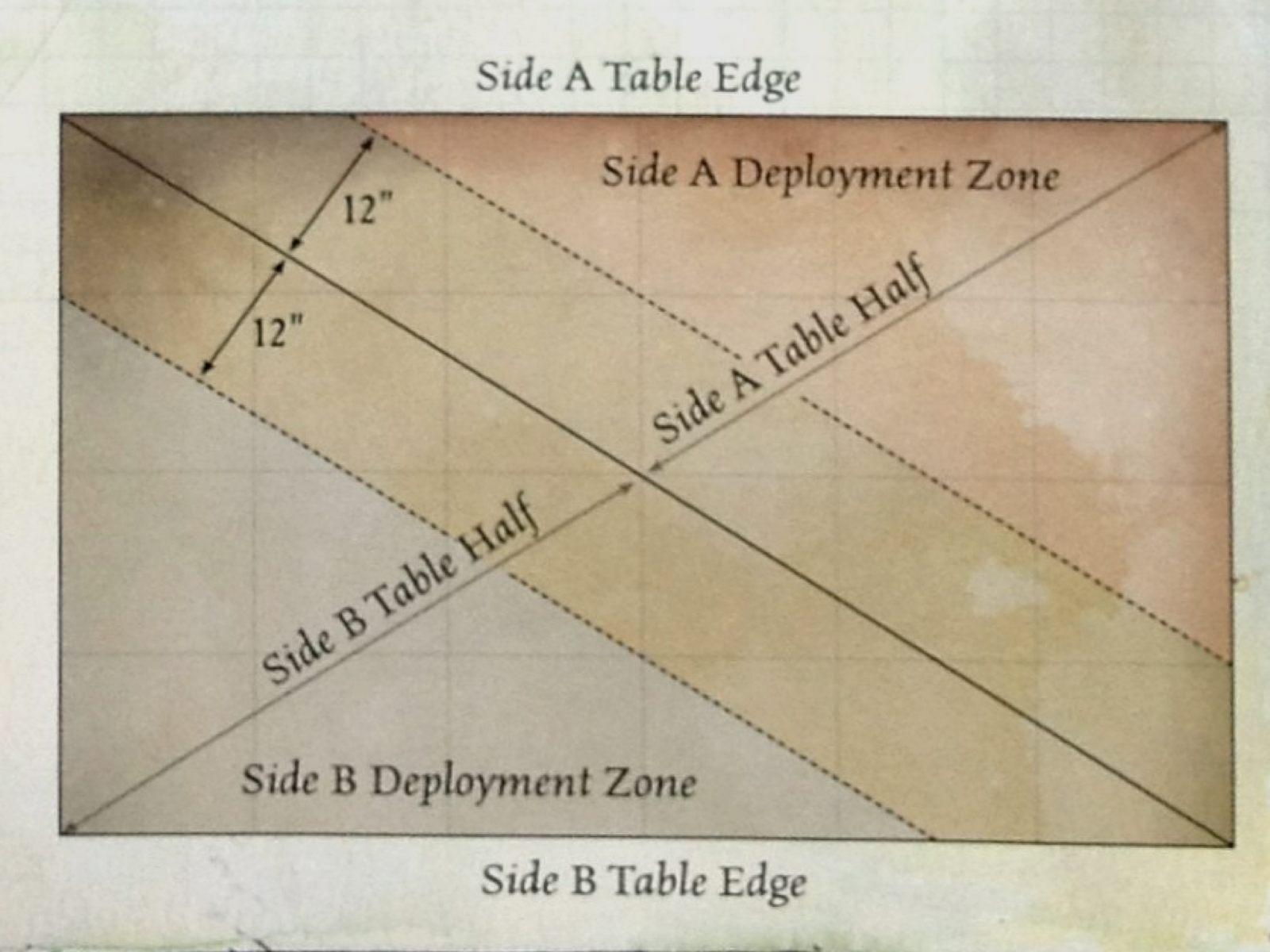 1 in each deployment
1 in the middle of the table.

Effects:  If the Imperial Forces are able to secure the field. Then the Imperial guard player may select  1 Ork unit, and force it to make a Ld test, if it fails the unit will take no part in the game, as it has been drawn off to a different battle.
If the Orks are successful,  then the Imperial Guard player will remove D6 guardsmen from every Infantry unit larger than 20 men,  and d3 from every unit of 10 or more. 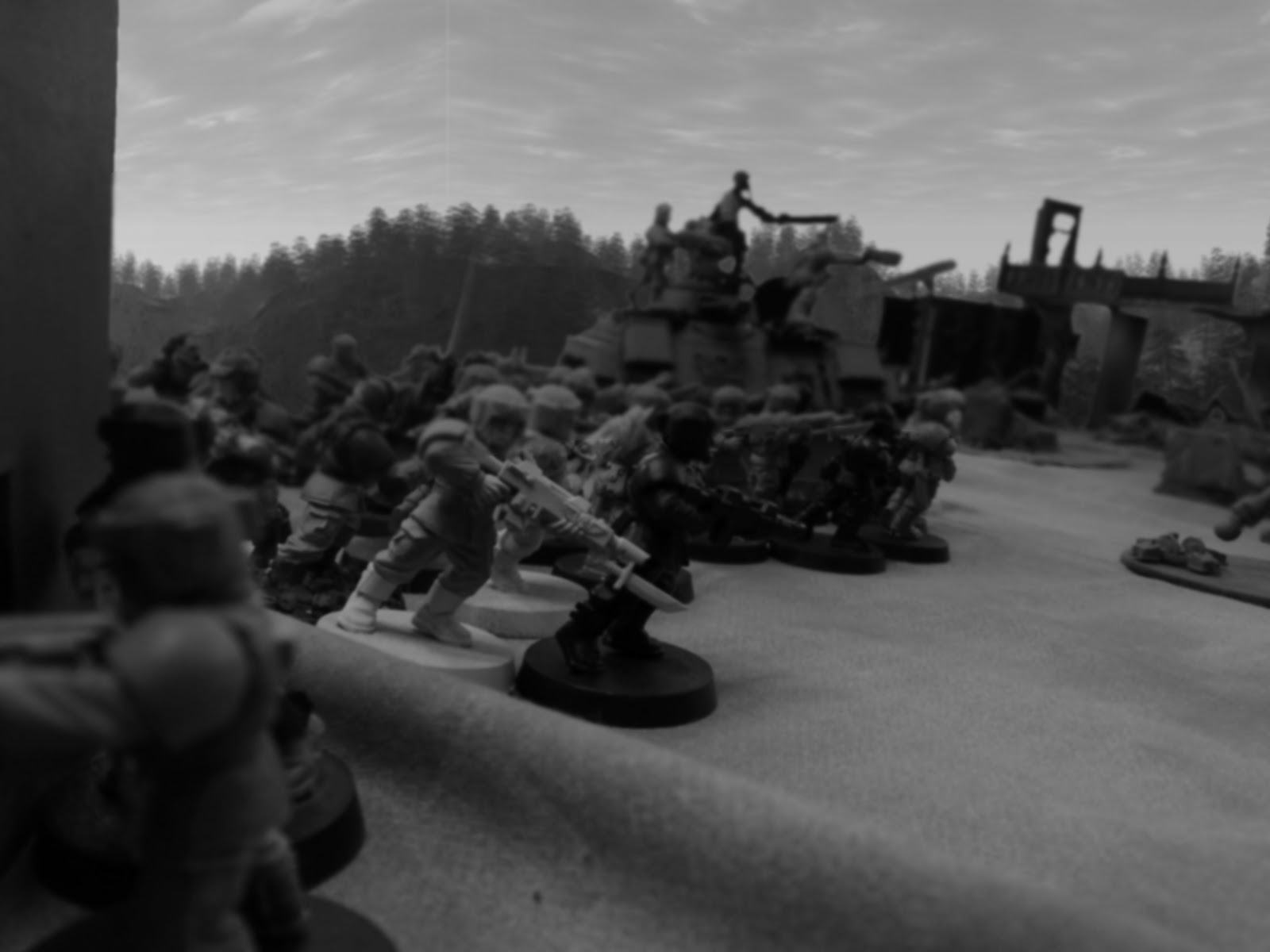 Col. Reynolds, 2nd Jornathi Advisory Battalion Report of Actions.
Alpharius Cohort, under the command of Jarl Mondix positioned in the Ctre Valley Firebase, to defend the vital railway junction in Guffmans Platz. Came under sustained assault by Blood Axes, of mixed composition. This marks an escalation in Ork aggression in this portion of the Foothills


The Cohort suffered minor casualties, most notably the loss of its' Chimera Armored Transport to a marauding Ork Dreadnaught. The Jarl himself, was critically injured at the height of the fighting, when the Orks overran his hilltop command position, his status is currently unknown as he was evactuated to a triage station, along with the bulk of the companies losses somewhere to the south of the firebase. Though reports from all present suggest that Mondix may have been responsible for turning disaster into what Tactica command is terming a strategic draw.

While the Blood Axes were rebuked it was but by a hair's breadth, The Ctre still belongs to the Imperium, but I am stressing that local Jornathi PDF bolster their forces.
I will investigate this Mondix, this region needs heros..
+++Transmission End+++ 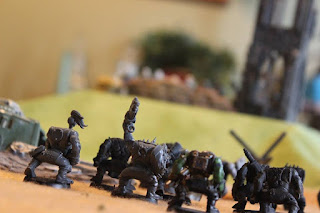 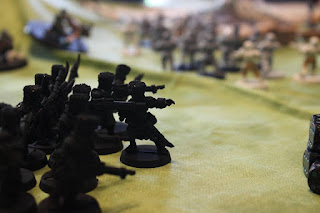 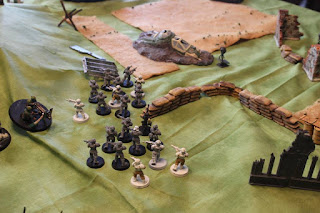 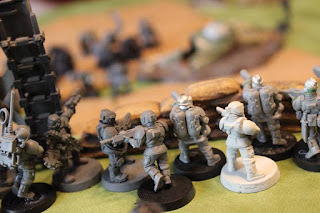 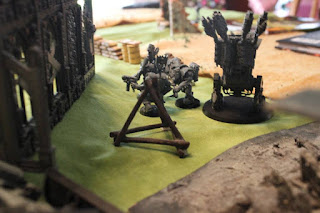 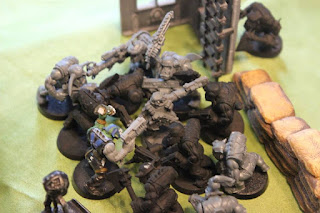 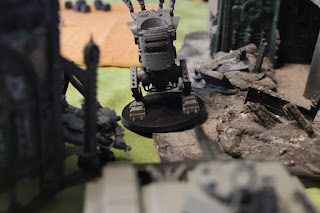 500pts Ork v. Imperial Guards.
Tactical Draw
Battle is influential for the size and audacity of the attack, pressuring Imperial Planetary Command, to commit to a direction for their first major offensive of the war "Operation Remits Maw"

Posted by Impcommander at 1:55 PM 2 comments:

Jornathi Ork Hunters
Established by Supreme Armsmaster Vazinas, after the Battle of Usamaljin Heights to combat the Blood Axes, infesting the planets’ northern reaches.  The Ork Hunters were tasked with hunting down the Greenskin Kommandos on their own terms,  and as a result are expert ambushers.

Restrictions:
All units who are capable of taking the ‘Camo Gear’ Upgrade must take it.
No Infantry units may take Heavy Bolters, Lascannons, or Autocannons as an upgrade.
No Units may take a dedicated transport.

Ambush Masters- all units in the formation who do not already have the ‘Scout’ universal special rule, gain it 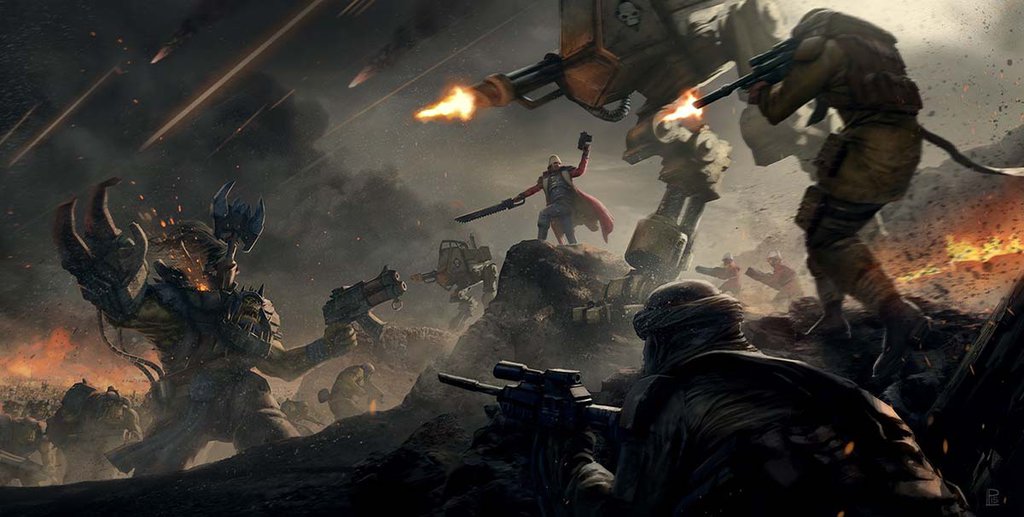 When the Orks crash landed onto Jornath, they had to survive and adapt to the cold atmosphere of the planets northern reaches.  The sensible thing to do would have been to burn the considerable stores of fuel that survived planetfall to power and maintain the camp…. But the Orks decided to use the fuel to create massive firebombs which they triggered in the depths of the local mining complexes, starting dozens of underground coal fires,  filling the sprawling tunnels with acrid smoke. It was the perfect environment for Ork Kommandos, and mobz of Blood Axes to move about the mountains undetected.  Since then,  the Orks of Northern Jornath have grown accustomed to low light and ambushing from concealed mine entrances.  Much to the horror of many of the planets Defense Cohorts.

Restrictions:
Nobz may not take ‘mega armor’
No unit may take a dedicated transport.

Brutal Kunnin’ :  roll a d6  at the start of the game on the chart below. 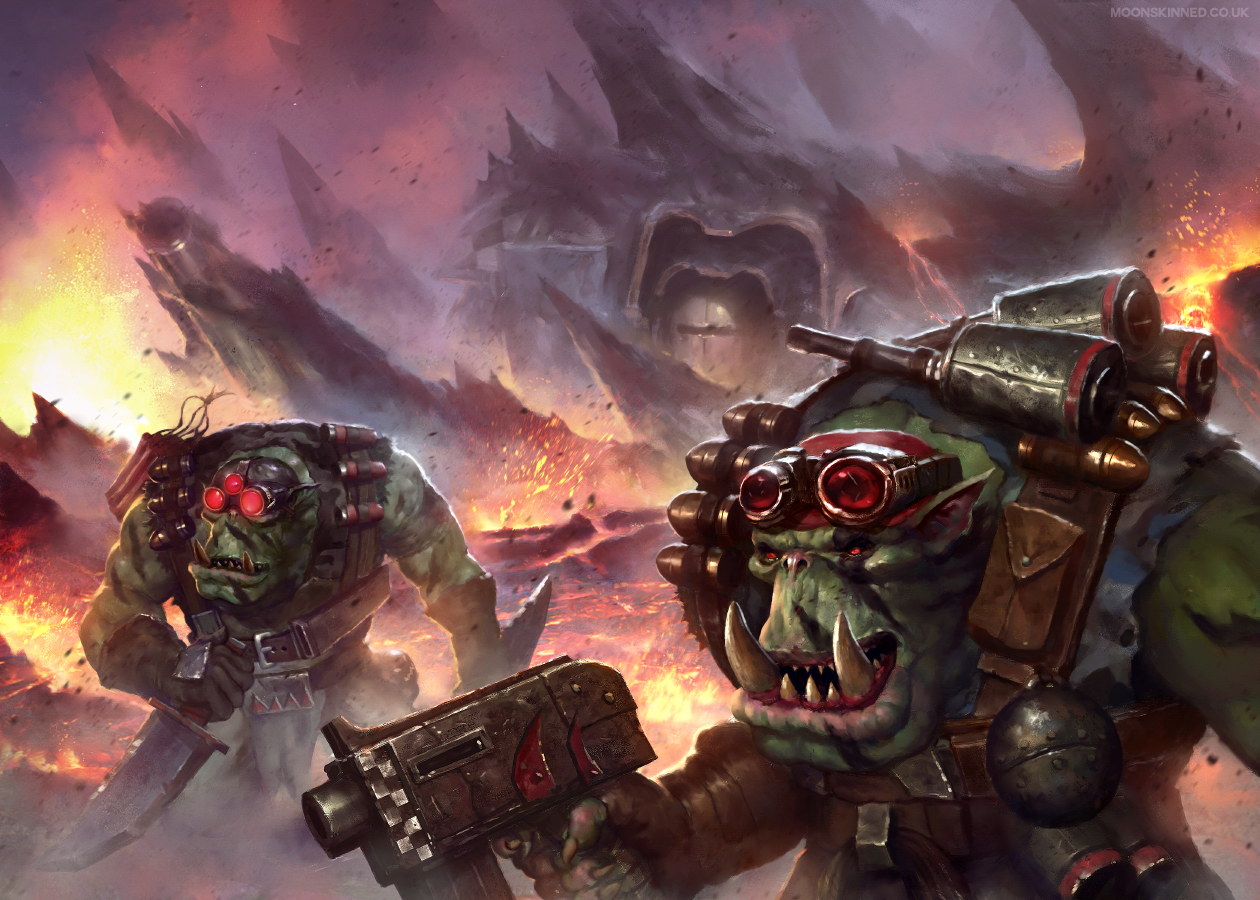 Posted by Impcommander at 6:40 PM 2 comments: