Harlequins Finished and some 15mm stuff

Hey guys, i finished the Harlequins and the Shadowseer (minus 1 Retro Death Jester, who i'll get to probably after the seer council)  so heres the pics 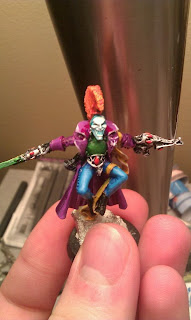 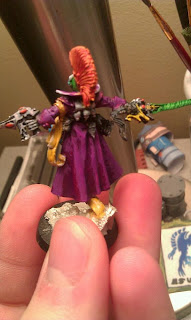 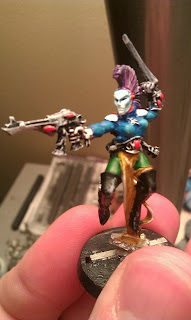 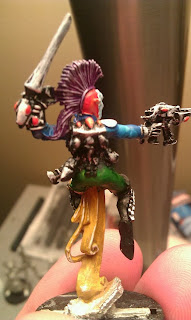 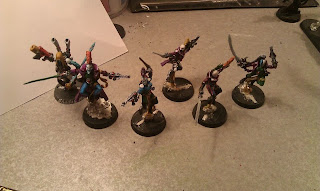 So there you have them, in all their cool, jester-assasin glory !


Also, i talked about "The Christmas War" last post, and i've been preping for it today, as i broke out some old Heroscape tiles and repurposed them for usage as a quick and easy way to make 15mm hills, (though i guess you could use it for any scale). I have bigger plans than just a badlands outpost, and i am hoping to add a forest soon, and a small town.  For now, here's what i've got 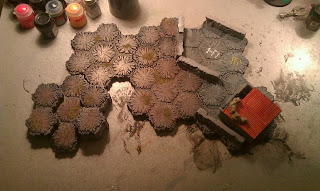 Overview of the Compound, and the path leading up to it. 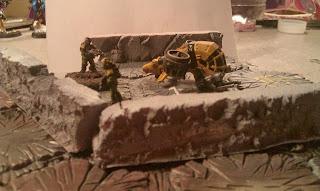 Close up of the walls, some Rebel mini's  PDF, which will be the Laurentian Troops. and a Mechwarrior gunship, which has been pressed into service for the Laurentian Military, shown for a bit of scale. 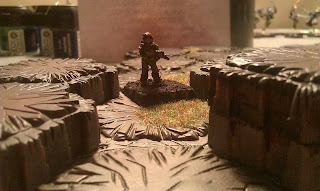 A Trooper, patrols the pass.


Thats all my updates for right now.  Im still mulling over exactly what craftworld i'll be doing, Im choosing between, Yme-Loc, Alatioc, and Biel-Tan.   I have decided to incorporate, Corsairs, Exodites, and a few Harlequin themed guys.  Loose fluff, is the Farseer, sees some grave threat (probably the Pilgrims) and gets as many military forces together as he can to stop them. Its for that reason i think Yme-Loc would be cool, as they are described as mostly artisans and therefore might not have as big a military presense as Biel-Tan or Alatioc; so they might use corsairs and the like to bolster them ?

What do you guys think about the stuff today. I always enjoy constructive critisism.

Posted by Impcommander at 6:48 PM 3 comments:

Harlequins and A random gimp creation

Hey guys. So i've decided that the rival army for my Chaos is going to be Eldar !  I've had these Harlequins laying around forever so i decided to paint them up. I've got a few more to go, but i figured you could use an update so here you go.  Also, i have a seer council, which begs the question what Craftworld should i do ?   OR  would you like to see either 1.) Eldar Corsairs  or 2.) A Harlequin themed army?  Let me know in the comments. 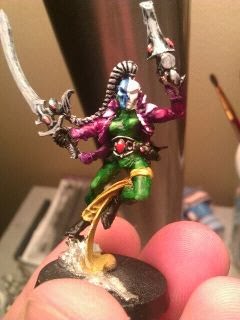 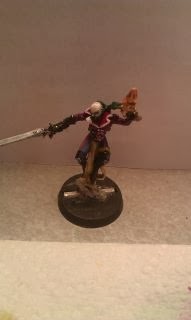 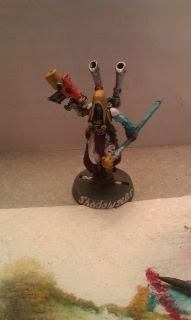 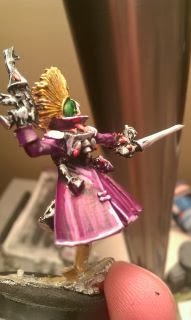 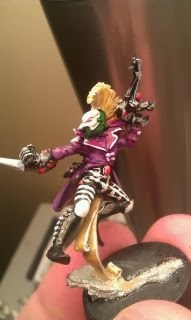 so theres the four i have finished right now. Still have another troupe member and the Troupe Leader to finish. 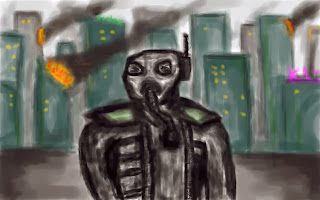 lastly, i was bored today, so i made this in Gimp, for the "Christmas War" campaign made by Chris at Dropship Horizon, which myself and Radioactive. Are going to play out for your enjoyment, in the next few weeks or so.


-another bit of news, if you live in my area. The owner of Gaming Underground in High Point, has said that he is more than willing to allow us to play up there, and will even start ordering anything wargaming you like. I'd love to help support another gaming store.   (Thanks to Radioactive for this one)

Posted by Impcommander at 1:43 PM 4 comments:

The Marks for Codex: Pilgrims of Rust


Mark of Khorne: Unit Gains “Preferred Enemy” but no secessionist troops will ever move within 6’’ of them. (this does not include, deep strike mishaps, and forces deployed at the beginning of the game or coming in from reserve.) As they are disgusted by the shear savageness of the men.


Mark of Nurgle: The unit may choose to re-roll failed armor saves, however if they do, then they will lose D6 members of the squad (chosen by owner) as Nurgle’s Rot consumes them in exchange for sparing the others.


Mark of Slannesh: The Unit must spend the first turn “preparing”, as such they will do nothing this turn (unless they are pinned or forced to retreat). The following turns they will count as Fearless.


Mark of Tzeentch: The Unit becomes horribly mutated, Roll a D6 at the beginning of the game, on a 1-2 the unit goes feral, they now count as “beasts”, lose their ranged weapons but gain +1 Attack and Weapon Skill, on a 3-4 the unit becomes partially non-corporal, they gain a +1 to their cover saves and gain Move through Cover, on a 5-6 the unit will lose D6 members chosen by the owner but, the unit leader(s) will gain the ability to use psychic powers, selected from the Army Powers list.

this is what i came up with. what do you guys think ?
Posted by Impcommander at 1:50 PM 3 comments:

Working on: Codex Pilgrims of Rust

hey, so i was working a little on the army special rules for the Pilgrims and this is what i made.

Ideological Divide (Chaos/Secessionist)- The human pilgrims are split into two broad categories representing weather they worship the Chaos Gods or not. Units with (Chaos/Secessionist)  are allowed to pick which they fall into prior to the games commencement. Units with (Chaos) may select marks of chaos from “Codex: Chaos Space Marines” with the price cost listed on the unit entry. If a unit is a secessionist, then they have access to their planetary special equipment, listed in the entry.


any thoughts for additional rules, and how do you like these ?

Posted by Impcommander at 9:20 AM 3 comments:

I've been busy working with my Thespian Troupe at school on "The Crucible", which if you are unaware is about the Salem Witch Trials. Anyway, for the past 2 months or so, i've been really busy memorizing lines and going to practice etc... The shows were this weekend and it went very very well, I really got to bond with my theatre friends and it was a great experience.  That said, the holiday season is coming, and that means a break from school, and therefore a boon to hobby. Which (lucky you) means you get to come on here more often and read my rantings.

I look forward to getting into the hobby projects again, and getting some sleep (FINALLY !)

-Cheers Guys/Gals !
Posted by Impcommander at 6:02 PM No comments:

Tanksgiving and the Jacobites.

Alright, so i've finally gotten time to post up these pics. First up is Tanksgiving (which was a while ago) but anyway, it was an Imperial v. Ork matchup  pics below.  The CEO from Army Transport was there and actually participated in the game. He showed off a new product and gave away a new bag for a contest. 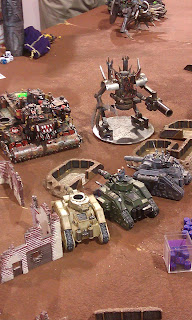 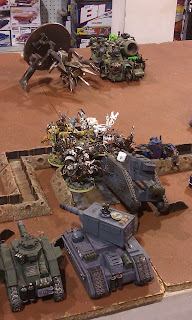 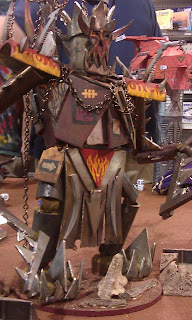 This ork Stompa is made completely of metal and has been welded together. 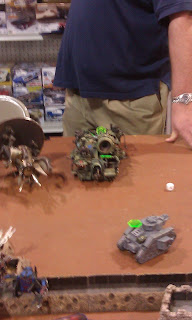 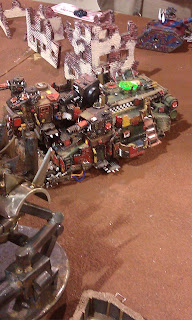 Now, the Jacboites. and the Free Greater Daemon which needs completion. 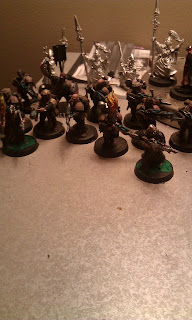 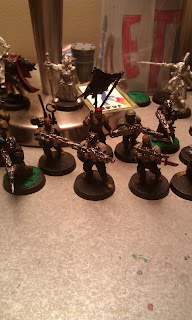 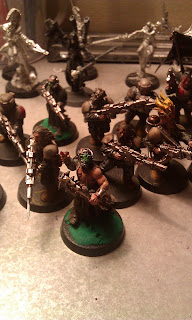 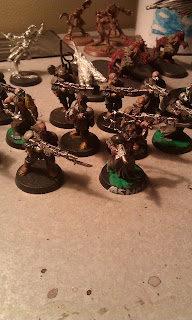 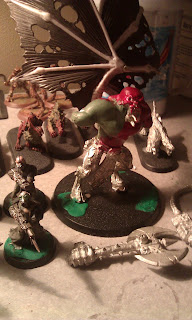 Now these pics also reveal the hidden rival army. Can anyone guess who ?