The Hausticans and Haustic Belief : Inside the Vahland sub-sector there are a number of divergent Imperial belief structures tolerated by the Ecclessiarchy. One of the most popular, particularly on the eastern edges of the Urient Sub Sector and Southern stretches of the Kalomyr sub is Hausticanism or Haustic Belief which holds a polytheist view of the Emperor. Essentially viewing the roles of the Emperor's life as separate divine entities manifesting through the singular vision of the Emperor as godhead. Thusly, his Astartes, and Primarchs represent divine fragments of the God-Emperor. There is a popular series of readings meant to complement the Leticio Divinitatus, called the Haustic Cantos which ascribe many of the sub-faiths particular practices and Belief structures in long-form poems in the Drenjion Style favored by many writers in the late M.40 Vahland Sector.

The Cadmusians: At the fall of Ankou, Shield Captain Cadmus of the Akhelian Shield fell in glory at the Stand in the High Civitans Palace. Two years later, at the Liberation of Ankou by the 3290th AG, his remains were recovered from the field of his death, untouched and barely decayed from his gene forged birth his body had evidently become a bad omen for the greenskins during their occupation of the moon. Building on his legend the Civilian administration of Jornath rechristened Ankou as Cadmus' Rest, and reappropriated supplementary control of the world from the Cult Mechanicus to the Ecclessiarchy, specifically Cardinal Emanuel Telly, who dabbled frequently with Haustic Belief. Tully alongside several members of the Jornathii Planetary Elite, developed the Cadmusian Canto, an embellished hagiographic retelling of the Ankou War, canonizing Cadmus in the Haustic Belief structure as a divine being, and therefore technically making Ankou (now Cadmus' Rest) a shrine world, Increasing the amount to be sent to the world via the Administatum for rebuilding efforts, and catapulting Jornaths importance as a cultural center beyond its already lofty heights in the sub-sector, potentially clinging to Casa Urients heels for Sub Sector Capital status years later The Sect Cadmusian has become an entrenched part of the pantheon of Imperial God heros within the Urient Sub Sector, the Bishopric of Cadmus' Rest established a military order about 60 years after the end of the 1st Jornathii Ork War, producing Crusaders for protection of Ecclessiarchy officials, as well as Guard officers, and Puritan Inquisitors. This order, is called the Miseracordia Jornathii officially, after the ubiquitous Custodians side arm. Their heraldry is that of the Akhelian Shield, being royal purple and gold. The Civitans Park where the last stand took place is preserved as it looked during the Liberation campaign, the body of Cadmus himself can be seen laying stricken atop the toppled Aquila, at the site of his death, though those in leadership are aware that his body is actually far away on distant Terra, and that the "corpse" on Ankou is actually a vat-grown flesh proxy clad in gold-tinted steel. The Akhelian Shield has on multiple occasions made its displeasure known about the deification of one of their fallen, and while the Ecclesiarchy has profusely apologized they have refused to issue a formal declaration of decanonization for Cadmus as it could spark a violent religious schism on or around Jornath 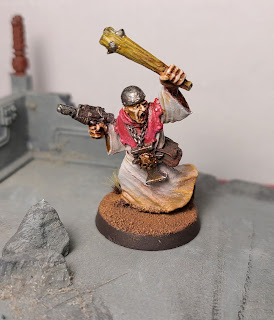 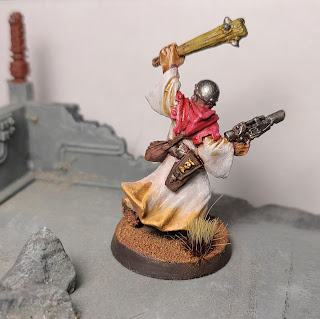 Posted by Impcommander at 6:12 PM

Please refrain from profanity and adult content. Thank You.